Can we afford NOT to have Pastors? 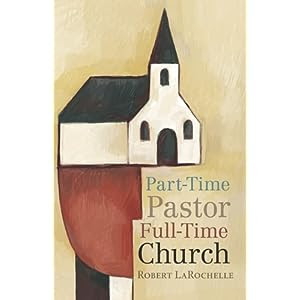 The Bible argues for a professional clergy - "In the same way, the Lord commanded that those who proclaim the gospel should get their living by the gospel." The ministry is important work - worthy of the dedication of a lifetime, 50+ hours a week, and the sacrificial giving of God's people.  So argues Pastor Heath Curtis in a recent post on the Gottesdeinst Online blog.

His point is well taken.  We have for too long intimated that Pastors do not really work or else their work does not require full-time employment and may be accomplished equally as well by part-time clergy.  In my own circuit, an SMP guy is soon to be ordained and it was said of him that he does not need to be paid since he has his retirement income.  Whether he chooses to be paid or not is one thing but to suggest that he does not need to be paid is quite another.  Are we setting out discount Pastors who work on the cheap because they do not come with a full blown seminary education and are geographically limited in where they will serve?

I have long spoken of the possibility of matching up CRM Pastors who are not serving a called position for one reason or another (error for which correction was made, marriage failure, congregational issue, short-term physical or mental disability, etc...) and seeing about matching these already bi-vocational people up with parishes for whom full-time compensation might be a reach.  That is the exception.  But the rule is always full-time clergy.

The problem is that we have begun to think of the Office of the Ministry in terms of function instead of office.  We have begun to think of those who hold that office as functionaries who are defined by what they do more than who they are.  In doing this we have made it easier to justify the part-time Pastor who works full-time in other employment or as the retired guy who "pastors on the side."  The Office of the Ministry is not a side-line.  It is not a hobby.  It is not a distraction.  It is and our Lord expects that it will remain a profession, vocation, and calling.  Folks, we are in dangerous territory when we begin to think in terms of function instead of office and when we expect anything less than a full-time profession for the bearers of Christ's Office to us.

What we might do in necessity is far different than what we do apart from constraints.  Yes, it may be that for some already earning an income for themselves and their families that a part-time position under certain circumstances will be a good thing.  But the idea that we need to shift to tent making clergy and that the sems need to begin to think and move in this direction is in direct violation both of the Word of the Lord and the confessional integrity of the Church.

The guy who comes once a month to take care of the pest control in our church also moonlights as a Baptist preacher.  He is a nice guy and does a credible job for us (as exterminator).  But his business is his livelihood.  Once in a discussion he said that Baptists don't expect their preachers to babysit them in hospital or funeral home or family crisis.  He asked me how on earth I juggle the needs of all the families and individuals in my parish if all of them need to be babysat.  Hmmm... is that what we call it?  I thought we had another term seelsorge or pastoral care.  One of the great dangers of the way some seem to be defining and directing the Office of the Ministry is to give up this pastoral care for a Sunday morning role, function, and duty -- setting aside the care of the sick, they dying, and the grieving as well as catechesis and private confession.  Last I knew, families do not schedule crises, death does not come by appointment, and the pastoral care of the people does not fall during the free time of the Pastor when family or other things are finished.

BTW, last time I checked the family of the Pastor had enough stresses and pressures without the need to share a dad with a job as well as a church.  In addition, if it has become our expectation that the wife of the Pastor subsidize the Pastor's vocation, we have more problems than money.

I write NOT from the perspective of one who has suffered financial need or been forced to find other employment to support my family.  I have always enjoyed a fair wage for my labors in the church and found my people wishing that they could give me far more.  I do publish and receive a small income from that but most of that goes for a few techno toys and some family gifts.
Posted by Pastor Peters at 6:30 AM

Your exterminator may be doing just that at his church. I'm not saying this to be funny. Baptists are among many of the evangelicals who often take pride in their LACK of education. There is the belief (among many) that the "call" of God means way more than seminary.

Having suffered through several of these ministers in my life, I certainly hope Lutherans will continue to be proud their clergy is the best educated in the world. I hope only extreme necessity will be the reason for bi-vocational pastors.

I don't for a minute believe Baptists don't want their pastors to "babysit" them. I was a Baptist for donkey's years, and never say anything of the kind.

I have also worked for the church, and will guarantee that even Baptist pastors work hard. Lutherans work harder as far as I can tell.

We need the seelsorge more than ever.

The same could be said of musicians in the church. So many churches believe that musicians should volunteer their time and not get paid. Nevermind the years of practice and schooling.