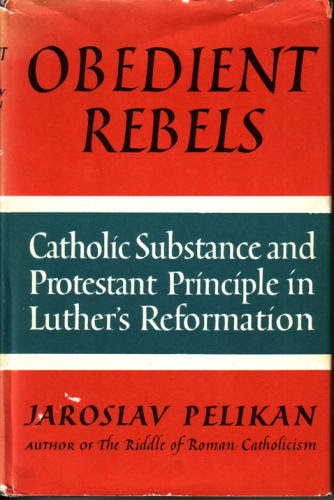 One of my first experiences reading deeper into Lutheranism was Pelikan's Obedient Rebels (prior to his exasperation with Lutheranism and his departure for Constantinople).  I think he got the title just right.  Contrary to other reformers and reform movements who delighted in the opportunity to jettison many of the things they did not like, Luther and the Lutherans were conservative reformers who kept almost everything and ditched only those things that outwardly conflicted with the Gospel and could not be salvaged.  Even in this regard, they were loathe to merely establish new rules and regulations to become the canon laws that would anchor a reformation community to law the way Rome was hopelessly bound to its rules.

What is clear is that Lutheranism (the confession) is always what is essential and the Lutheran Church may or may not be faithful to that catholic confession and may or may not survive, even though the confessions themselves endure because they confess the catholic and apostolic faith.  I am under no illusions about the enduring character of the Lutheran Church Missouri Synod.  I do not want or expect the LCMS to die but if it does, Lutheranism will not die with it.  Those who are fond of saying that Missouri is the only and last hope of Lutheranism should consider again the words of Obi Wan Kenobe.  "There is another..."  And there will always be even when the name Lutheran is not kept but the faith remains confessed!

The pivotal issue for the Reformation is always whether it was a tragic necessity (obedient rebels) or an unnecessary tragedy.  Rome insists that the errors pointed out by the Reformers have been corrected and the patient has healed itself of its infection.  From Trent to Vatican II, from Leo X to Francis I, the assurance is that what was wrong has been righted and what was in error has been corrected and what was contaminated has been cleansed.  Then Francis brings up the issue of indulgences again and Lutherans, even those who had hoped that Lutheranism had outlived its necessity, sigh in pain.

None of us likes being Lutheran (except those who have no more idea of what it means to be Lutheran than they do what the Reformation was really about).  We do not protest what should not be.  We protest what cannot be, what the Gospel cannot allow.  We are Lutheran because Rome has not been reformed.  Oh, maybe not exactly the same errors but Rome is still much the communion that Luther knew a half a century ago.  So we continue to confess -- not so much against Rome or anyone else as much as for that which cannot and dare not be left silent or cast aside like so much historical garbage.  We confess... not that we repeat what was once confessed as if it were merely the fact of our history but to speak ever anew what is catholic, what is evangelical, what is Scriptural, and what is truth.  These are not at odds but of the same cloth.

Whether the Lutheran Church ever gets it right is a different issue over whether or not Lutheranism was and continues to be necessary.  That question goes to the core issue of whether or not Lutherans have confessed faithfully the catholic faith (as the creeds put it).  I will be honest in admitting that I know the Lutheran Church has got it wrong and gotten it wrong over and over again.  But, as Sasse said of Rome, our assurance lies not in finding the perfect church but in finding the Word and the Sacraments, purely preached and rightly administered.  Luther never said the church ceased to exist but that it became corrupt until the structures of the church became almost an enemy of the Gospel.  Yet Rome always had the liturgy, the Word, the Sacraments.  So the Lord continued to work within the muck of error.  What Sasse said of Rome can no less be said of Lutheran churches that have become themselves enemies of the very Gospel they claim to proclaim.

When this error infects the confession, there is little left that makes it possible to restore what was lost and reclaim what was once confessed.  This is Missouri's hope and promise -- our confession remains even where our practice is corrupt and individuals confess in opposition to what we confess.  Where the confessions remains true and pure, the mechanism to restore and repair the church and her structures is there.  Without the confession, what is there left to use to call to account the errors of the church in doctrine and practice?

Lutherans can no more claim the legacy of the past as their redeeming grace than Rome can run from what Trent and others said in conflict with the Gospel and the catholic faith.  Both Lutheran churches and Rome must continually confess, continually reform, and continually repair what error has crept in, boldly walked in the front door, or been allowed to exist unchallenged for so long it is deemed to be truth.

It is not like we have a shopping list which Rome must meet before we can lay down our Lutheran Confessions and swim the Tiber.  It is enough (satis est) is no minimalism of the least amount of orthodoxy that can be found to call the church orthodox.  We are not Abraham arguing for Sodom and Gomorrah.  We struggle not for less but for more always -- within the Lutheran churches and within Rome.  For if the Reformation will ever cease to be needed, it will come when the fullness of the catholic faith is boldly believed, confessed, and taught.  The process is ever and always ongoing.

Lutheranism, if it is worth anything, confesses the true faith and nothing less.  So Lutheranism will endure.  If there are to be Lutheran churches, their only cause to remain must be more than simply "no" to error but the "yes" to what is good, right, and true.  Once they cease trying to be what their Confessions claim, the churches will be anachronisms.  But the faith will endure.
Posted by Pastor Peters at 6:00 AM

We could revive the old Tennessee Synod, or rename it the "State of Franklin" after the mythological lost State of Franklin:) The Henkle brothers would be our patron saints.

Francis I is a dunce and a sad successor to Benedict XVI, a truly wise, learned, and holy man. He is a great embarrassment to the RCs today, I think.

Rome continues to be in error on many points, and getting worse. There concept of evolving revelation, where no dogma is generated from time to time by the magisterium, is utterly non-Biblical. This includes, for example, the Papal Infallibility dogma, the dogma of the Assumption of Mary, and the dogma of the Immaculate Conception. There is simply no Biblical support for any of these, nor can one make a very strong common sense argument without limiting the power of Almighty God.

Rome has a bad habit of declaring things to be true that simply cannot be supported. Then when they are backed into a corner by the eventual exposure of the truth, they cannot bring themselves to admit the truth without also admitting that they were wrong. This last they will never do, so the errors continue as articles of faith for them.