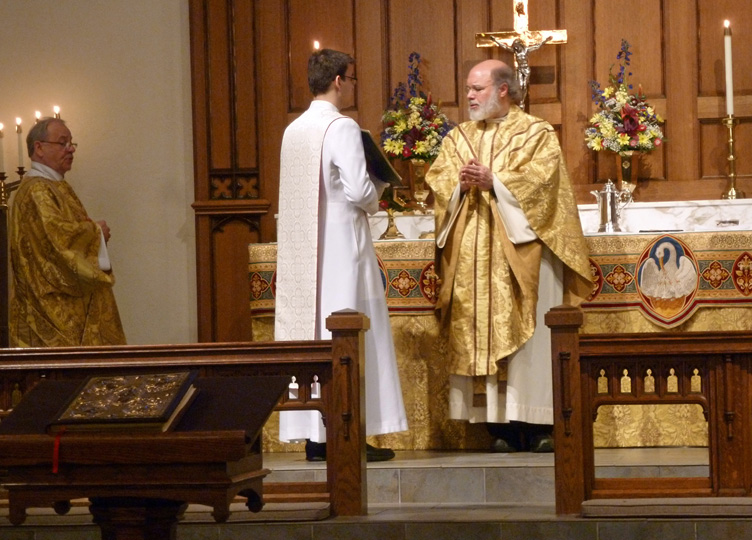 For many, even Lutherans, every Sunday celebration has become, in a sense, a new endeavor.  It is a creative writing and music project that looks at the ingredients and assembles them toward a predisposed purpose.  It is essentially a new compilation; though it may be guided by elements of the past, it is not the passing on of what went before but a new construct even when it assembles elements of the old.  It is designed to be not only a new construct of the human ingenuity but a local creation reflective of local intent, local resources, and local need. Even if those who create this "new" Sunday celebration utilize the “traditional” options, they are chosen not because they are traditional but because they "work" according to the design and goal for that particular gathering and this may not have much influence over the next clean sheet when next week's creation is set upon.

Tradition, in this sense, is a topic to be mastered and not the sacred deposit or the faithful handing off from one generation to another.  When every Sunday is a celebration to be created, tradition may be one of the component groups that one should cover but it is not definitive or even, necessarily, informative. This new idea of liturgy sees the form as malleable at its core and not set in any real way.  This, combined with the weight given to local adaptation, means that worship undergoes a continuous evolution -- always becoming and never there.

The responsibility for this creation is given to the worship minister or pastor or parish musician(s) or a combination who must craft something new, relevant, authentic to the place, and effective to accomplish the purpose set out for that particular Sunday.  It is a process that may somewhat be set but it is design to re-invent the outcome week by week by week.  The factors used to measure what is created have less to do with faithfulness than they have the specific, measurable, and relevant goals set for the gathering and the success in achieving them.  After it is over, the principals sit down to assess what happened and unpack the event with a goal to discovering what worked and what did not, what was good and what was not, what to keep and what to discard -- not all that much different than an evaluation of a conference which asks attendees to rate the food, accommodations, speakers, etc..

The fallacy of reverence presumes that as long as reverence is preserved, what actually happens on Sunday morning does not have to be traditional or uniform or even consistent with tradition.  These are, as Lutherans are wont to say, adiaphora.  They are externals and we all know from Jesus that externals do not count, right?  It is the heart, right?  That is what matters.  Do what you do decently and in good order (reverently) and it does not matter so much what you do.  So be sincere in what you do, serious minded, prayerful, and reverent and nothing else matters so much -- not the actual language of worship, not the type of music, not the vestments of the pastor, not the way communion is distributed, not whether or not the lectionary is used, and not if the hymnal is used.  These things are externals, adiaphora, and incidental to worship.

The problem is that tradition is treated as a series of isolated and unrelated facts and not the living faith of the dead.  The problem lies in the way that we treat tradition as if it were a subject to be mastered and not the sacred deposit of the faith prayed (and confessed).  The problem lies in the way that we presume our superiority over those who have gone before and cast aside the witness of the saints as something done then or even perhaps superstition -- things we have gladly outgrown and can now have fully inculturated, relevant, and locally adapted worship that is more authentic than the form of the tradition once handed down.  It is an attitude of impossible arrogance yet it is the presumption of many who figure out what is going to happen when people gather on Sunday morning ostensibly for worship.

We prefer to be the grand editors of God rather than those who pass on what He has said and done.  We can edit out hard passages from the lectionary or omit parts of the historic mass that we find outmoded or rewrite things to fit a modern world view or effectively remove those things that attack or offend our modern day mindset.  Tradition is not the master of Scripture but Scripture is what informs our tradition (or it is hardly worth calling it tradition).  Tradition deposed leaves us only with the present, the moment.  In that moment, we submit not to the tyranny of the Spirit or the Word but the preferences and whims of the day, our constant quest for instant inculturation, the transient instability of our emotional mood, the self-proclamation of the individual or even the group. It may be a perfect stepchild of the Enlightenment --  ahistorical, sociable, accessible, efficient, unthreatening -- but it is hardly true to God, to His work in time and over time, and to the Word that endures forever.  It may very well be pleasant, convenient, free of superstition, devoid of ancient myth, and powerless to menace us with something we find distasteful, but it is surely not of God or from God.   If good things happen it is due to the felicitous inconsistency of a God who actually works through His Word even when we do everything in our power to isolate it or control it.  The people of God deserve better.  Given the choice between the sterile dogmatic void of emotional appeal, personal reference, and relevance, I will choose the hard and truthful character of the Divine Service and its gift of mercy in the means of grace.  Tradition lives.

Indeed, there are many variations of the worship service, even in the LCMS, and the debate will go on as to the creativity of the process, and the desired mix of traditions and contemporary usages. I for one cannot judge, only state some preferences. But the larger picture is that God does look at the heart, and He has His children in all generations, all denominations, in all lands, cultures, and ethnicities. Should a believing Native American in a Native American church on a reservation in Arizona have the same ceremonial worship style as a German Lutheran in Berlin? Is the German more devout than the believing Apache? Having lived in Arizona for 7 years, I can tell you there are, in fact, Apache Christians, and some of them are Lutheran. I think sometimes we are more concerned with the format of the worship style more than God Himself. In the end, in the final analysis, God weighs our hearts. The Old Testament is filled with references to God's displeasure with the children of Israel for focusing too much on sacrifices and ceremonial laws than on living out their faith in spirit and truth.

Where in the hell did any Lutherans get it in their head that Jesus decried externals and that he only cared for what was in the heart? What utter B.S. If Jesus had decried the externals which the anti-liturgics crowd in the LCMS and other PRotestant divisions are wont to insist, then how come Jesus never said anything recorded about doing away with the worship of the temple? In the Orthodox tradition, one of the things Jesus taught before He ascended was the liturgy that later became the Liturgy of ST. James. Even if you don't buy into that particular tradition, there is nothing in Jesus' earthly life which decried liturgy or the inherited traditional worship associated with the Jewish temple. NOw, he did decry hypocrisy, but that is far and away not the same thing as decrying the mode of worship. There's nothing wrong with the inherited tradition. Don't fix what is not broken.