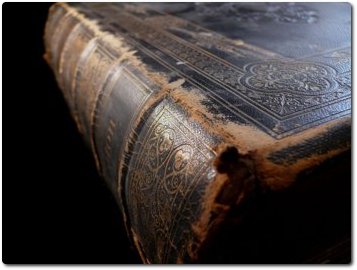 On my shelf I have various versions of the Bible.  They go from the Contemporary English Version and its careful use of a rather limited vocabulary to An American Translation with its idioms unique to America and to a particular time in America to St. Paul's Cotton Patch Version of his epistles and its homage to the Southern dialect to rather English versions (King James to New English Bible) to the many English versions from American publishers.  Some of those versions are positively unusable for anything that personal pleasure.  They would cause grimaces and laughter if used on Sunday morning and are not suitable for serious Bible study.  Others seem designed to roll off the tongue with elegance and eloquence that honors the words as the Word of the Lord.

I was reading a while back about translations and the work of translators and the author suggested that the attempt to use sacral language, a language particular to the worship of God and recognizable for this was the deliberate pursuit of a ceremony of the Word.  He cited in particular the KJV rendering of the Nunc Dimittis, the Song of Simeon.  The translation allows the words to sing even while speaking them but also lend themselves to chant in a surprisingly wonderful marriage of text and melody.  It is not so much about taste but about the perspective of sinners before the Most High God who has deigned to come low in the flesh of His only begotten Son for them and for their salvation.  It is language designed not to treat God as an equal but to live within the tension of the God who is greater than all and yet who comes to us incarnate in our flesh and speaking our langauge.

It is really a question of whether there is a way of translating that honors the Scriptures as that authoritative, efficacious, and infallible Word without distancing us from what it plainly says.  I believe there is.

Some in Rome has been chafing under the translation adopted some seven or eight years ago.  In particular this is noticeable in the collects but it is also profoundly apparent in the creed (consubstantial, anyone?).  There are still many who reject the new translation as not ordinary language.  Perhaps that is its strength?!  When the Worship Supplement of the LCMS came out in 1969 it was clear that some words were too wedded to the moment.  They became embarrassing or even downright humorous as the years passed them by, the liturgical equivalents of leisure suits!  One liturgy boldly began, "We are here... because we are men."

Liturgical beauty is not aesthetics.  It is about honoring the Lord while at the same time communicating His Word and delivering His means of grace to His people in ways that honor Him as the Lord.  It is not about distance but about respect, words that encourage a sense of awe, just as their counterparts in ceremony do the very same thing.  It is about words that teach even as they speak,  bestowing the reverence of which they speak.  It is one reason why I have to bite my tongue and say what is usual instead of saying "Thus saith the Lord" after the pericopes are read in the Divine Service.

I think that gets it about right.  A good translation is, indeed, a ceremony of the Word.  Such words are not mere matters of taste or of clarity but in the way they address us they also call us into the obedience of faith and the submission to the Word as a people who not only believe it but believe in it.
Posted by Pastor Peters at 6:00 AM