Words even for a Lutheran to note. . .

Msgr Charles Pope wrote on his blog:  On the Worthy Reception of Holy Communion. . . Last week in the Office of Readings of the Liturgy of the Hours, we read this from St. Justin Martyr:

No one may share the Eucharist with us unless he believes what we teach is true; Unless he is washed in the regenerating waters of baptism for the remission of his sins, and unless he lives in accordance with the principles given us by Christ (Apologia Cap 66: 6, 427-431).
St. Justin may have had in mind this text from the Letter to the Hebrews, which links proper doctrine to the reception of Holy Communion:

Brethren, Do not be carried away by all kinds of strange teachings, for it is good for the heart to be strengthened by grace and not by their ceremonial foods, which are of no value to those devoted to them. For we have an altar from which those who serve at the [old] tabernacle have no right to eat (Heb 13:9-10).
Thus, communion points to doctrine not hospitality. The Eucharist comes from a basic communion of belief and serves to strengthen that belief. It is no mere ceremony; it is a family communion rooted in our communion with who the Lord is and what He teaches. This common belief makes us brothers and sisters in the Lord.
In the modern debate about who can and should receive Holy Communion, some presume that everyone has the right to approach the Eucharistic sacrifice and partake of the Body and Blood of the Lord. In this view, limiting or discouraging indiscriminate reception is dismissed, not only as unjust, but as contrary to the practice of Jesus Christ, who “welcomed everyone,” even the worst of sinners.
In this sort of climate, it is necessary to explain the Church’s historical practice of what some call “closed communion.” Not everyone who uses this terminology means it pejoratively; to some extent it is a fair description.  For the Catholic Church, Holy Communion is not a “come one, come all” event. It is reserved for those who, by grace, preserve union with the Church through adherence to all that the Catholic Church believes, teaches, and proclaims to be revealed by God. Our response of “Amen” at Holy Communion signifies our communion with these realities along with our faith in the true presence of Christ in the Eucharist.
Many today have reduced Holy Communion to a mere sign of hospitality, such that if the Church does not extend it to all, we are being unkind. This misconception is often based on a mistaken understanding of the nature of the Last Supper (and the Eucharist that proceeds from it). Many years ago, Pope Benedict XVI, then Joseph Cardinal Ratzinger, articulated the misunderstanding well. Following are some excerpts from his Collected Works, Vol 11, Ignatius Press pp 273-274:

Nowadays [some] New Testament scholars … say that the Eucharist … is the continuation of the meals with sinners that Jesus had held … a notion with far-reaching consequences. It would mean that the Eucharist is the sinners’ banquet, where Jesus sits at the table; [that] the Eucharist is the public gesture by which we invite everyone without exception. The logic of this is expressed in a far-reaching criticism of the Church’s Eucharist, since it implies that the Eucharist cannot be conditional on anything, not depending on denomination or even on baptism. It is necessarily an open table to which all may come to encounter the universal God …
However, tempting the idea may be, it contradicts what we find in the Bible. Jesus’ Last Supper was not one of those meals he held with “publicans and sinners.” He made it subject to the basic form of the Passover, which implies that the meal was held in a family setting. Thus, he kept it with his new family, with the Twelve; with those whose feet he washed, whom he had prepared by his Word and by this cleansing of absolution (John 13:10) to receive a blood relationship with him, to become one body with him.
The Eucharist is not itself the sacrament of reconciliation, but in fact it presupposes that sacrament. It is the sacrament of the reconciled, to which the Lord invites all those who have become one with him; who certainly still remain weak sinners, but yet have given their hand to him and have become part of his family.
That is why, from the beginning, the Eucharist has been preceded by a discernment … (I Corinthians 11:27ff). The Teaching of the Twelve Apostles [the Didache] is one of the oldest writings outside the New Testament, from the beginning of the Second Century, it takes up this apostolic tradition and has the priest, just before distributing the sacrament saying: “Whoever is holy, let him approach, whoever is not, let him do penance” (Didache 10).
This makes clear the root of the problem: the failure to see the Eucharist for what it truly is: a sacred banquet wherein those who enjoy communion with the Lord (by His grace) partake of the sign and sacrament of that communion. Holy Communion serves to celebrate and deepen the communion already operative through the other sacraments of Baptism, Confirmation, and Confession.
You may label this communion “closed,” but at its heart it is more positively called a sacrum convivium, a sacred meal of those who share a life together (con (with or together) + vivium (life)). This is not a “come one, come all” meal; it is a Holy banquet for those who wear the wedding garment. The garment is righteousness and those who refuse to wear it are cast out (cf: Matt 22:11-12 & Rev 19:8).
Many moderns surely would prefer a “no questions asked” invitation to all who wish to come. It fits in well with the popular notion of inclusiveness and unity. To a large degree, though, it is a contrived unity, one that overlooks truth (the opposite of which is falsehood, not just a different viewpoint). Yes, it overlooks the truth necessary for honest, real, substantive unity. Such a notion of communion is shallow at best and a lie at worst. How can people approach the Eucharist, the sacrament of Holy Communion and unity, and say “Amen” when they differ with the Church over essentials such as that Baptism is necessary; that there are seven Sacraments; that the Pope is the successor of Peter and the Vicar of Christ on earth; that homosexual acts, fornication, and adultery are gravely sinful; that women cannot be admitted to Holy Orders; that there is in fact a priesthood; that Scripture must be read in the light of the Magisterium; and on and on? Saying that there is communion in such a case is either a contrivance or a lie, but in either case it does not suffice for the “Amen” that is required at the moment of reception of Holy Communion.
Such divisions do not make for a family meal or a sacrum convivium. Hence, to share Holy Communion with Protestants, dissenters, and others who do not live in communion with the Church is incoherent. To paraphrase Cardinal Ratzinger (Pope Benedict), the Eucharist is not a table fellowship with publicans and other “sinners”; it is a family meal that presupposes grace and shared faith. 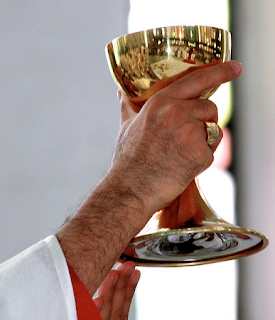 Today we will discuss the need to approach the Sacrament of Holy Communion free from serious and unrepentant sin. Let’s consider some texts showing that the Church’s desire that her sons and daughters receive Holy Communion only when in such a state is not only a proper but loving. The excerpts are followed by my own commentary, presented in red text.

Cardinal Ratzinger/Pope Benedict speaks eloquently and persuasively the Roman mindset. No surprise there. The Didache shines light on early practice of a group of Christians--historically interesting and illuminating...
Yet,
Who receives this sacrament worthily?
Fasting and bodily preparation are certainly fine outward training. But that person is truly worthy and well prepared who has faith in these words: “Given and shed for you for the forgiveness of sins.”