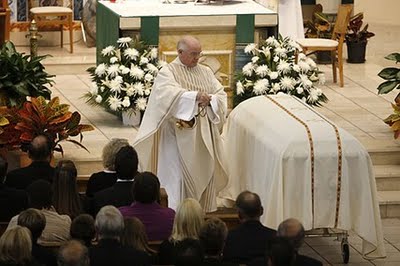 Christian funerals are much like non-Christian ones and their cemeteries much like non-Christians ones.  In some respects, we have become merely one of the many marketers of services to people seeking a product -- mostly a cheap but meaningful funeral to send the dead on to whatever future there is. We have the same music and we have the same eulogies -- heavy on sentiment and not much more.  The bodies are painted up to look nice and they rest in the same boxes.  Maybe a cross might mark the Christian one but even those outside the faith are not immune to symbols -- whether or not those symbols have much meaning.  We say the same pious platitudes about how the dead are in a better place and we console ourselves with the same curious thoughts of what the dead may have wanted or did not want.  How sad it is that this has become the state of things.

How did this happen?  How did we go from the death that kills death to death that is the end?  When did we surrender the cosmic dimension of Christ's resurrection to an individualistic sentiment.  When did we try to imagine the life that Scripture says is hidden with God and when did we content ourselves more with this imagination than the unimaginable that St. Paul says awaits us.  When did we begin to think that death could be tamed or neutralized or humanized by something other than Christ and His empty tomb?  When did we begin to think of life after death as ours and not life with Christ and in Him?

Before coffins were invented, the body was washed by the family and a bed laid out for it even at the altar.  Death could not be masked by make up and the machinations of man.  Yet the Church did not have a rite bequeathed to them and in persecution found it to mark death in any way different from the pagan surroundings.  It was a gradual development and many days passed before a procession would cry out Alleluia or the Psalms of death be repeated out loud and in public as they made their way to the grave.

Strangely, when we look at the art of the catacombs we see that the art displays a baptismal theme.  The funerary art of the caves is oddly not about death at all but about the sacrament of life.  Here is the promise.  We are baptized out of death and into new life in Christ -- the life where death cannot reign or even intrude.  So writes St. Paul:  For I am sure that neither death nor life, nor angels nor rulers, nor things present nor things to come, nor powers, nor height nor depth, nor anything else in all creation, will be able to separate us from the love of God in Christ Jesus our Lord.  To die is gain and the final enemy to be destroyed is death.

It seems at every funeral there is something new that has been added ygwzand at the same time an abridgement of what was.  So the Psalms are reduced to one and that one, especially Psalm 118, to but a few verses.  Is it because we are no longer sure what to do with the Word of God or is it that find more comfort in things of our own making than in the Word that endures forever?  I wish I could say.  In any case, the liturgical elements of the faith have been forced to make room for the very things that confuse our hope and distract us from Christ, whose resurrection is our life and our hope.  The last things we pay attention to are not the things of Christ but the sentimental details that mark our final moments in this mortal life.

I have found some Christians resistant at the prospect of a church funeral because they do not want to mark the place of faith with the memory of the dead.  In reality, it is the place where we are closest to those who have gone before.  Therefore, with angels and archangels and with all the company of heaven. . .  I can think of one family that has hardly been in church since the death of mother and grandmother.  It is too painful, they say.  It is easier to stay home and live within the memories.  Is that what we have come to?  Are we such strangers to our hope?  Have we forgotten the death that gives us life?

Our cause as Christians is two fold.  On the one hand it is the rediscovery of death as tragedy.  We  must learn to say defiantly against those who would befriend it that death is the enemy.  Death reigns because of sin.  There is no escape.  Because all have sinned.  All die.  Yet at the same time we must also rediscover the death that is victory.  Christ's death that has met our enemy and killed him once for all.  Christ who has met our sin with the grace of forgiveness.  Christ who lay in the belly of the earth and yet death could not contain him nor the grave silence His voice.  Christ whose resurrection is so profound and powerful that it is the rescue for a people marked for death.  Our hope is not for some somewhat out there but life with Christ because we are in Christ.  If we learn again the voice of this hope, we may be able to rescue our people from the abyss of despair and from the false comfort of a yesterday which can never return.  And then the world may just find cause to look and to listen.  When our weekly Divine Services are once again endowed with the same urgency and anticipation of the future, then maybe our funerals will once again be marked by the hope and expectation of the resurrection of the body and the life everlasting.  When our preaching and teaching is once again about the death of Christ for sin and the gift of Christ in the resurrection, perhaps our people will learn that their best life is not now nor the future a consolation prize for the crap they have suffered (mostly of not getting what they wanted out of life).
Posted by Pastor Peters at 6:00 AM

Sadly, I think that families no longer look to the Church for guidance when a funeral must be arranged. The turn to the secular funeral home that gives all the appearances of a church, except for faith. This is what happens when people cease to actually believe. The go with an imitation, rather than asking for the real thing, in this case, a Christian funeral. It just reflects the decline in faith among those left behind.