An Admirer of Healey Willan 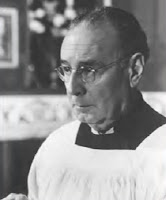 I heard that the great work of the composer Healey Willan, particularly within the context of the potential for English chant and polyphony, is being remembered and encouraged in a new society. The Canons Regular of St. John Cantius have established the Healey Willan Society "in consultation with Mrs. Mary Willan Mason [daughter of Healey Willan], for the purpose of fostering the musical works of Healey Willan."

While Willan’s music is known and loved by church choirs, organists and instrumental ensembles, much of his music in no longer in print or has never been published. After Johann Sebastian Bach, Healey Willan is the most prolific composer of church music. It is the goal of the Canons Regular of St. John Cantius and of the Healey Willan Society to bring back into print as many musical works of Healey Willan as possible. This will be accommodated through Biretta Books, Ltd., the publishing house of the Canons Regular of St. John Cantius. The Healey Willan Society will foster an increase in the public performance of his musical works in churches, concert halls, etc., as well as through audio recordings, as well as in film, radio, the Internet and television, etc. 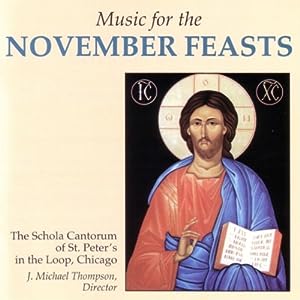 Healey Willan composed two of my very favorites.  One is an absolutely marvelous setting of the Te Deum for use in Matins.  It was a particular favorite at Junior and Senior College and I still miss singing it even after so many years away from those institutions. I only wish that I had a decent recording of the Willan Te Deum.  The only one I could find on YouTube was a rather poor recording of one of the Concordia Colleges holding an alumni gathering.  I did purchase the November Feasts album of the Choir of St. Peter's in the Loop.  (From Fr. Hollywood:  A magnificent choir known as the Schola Cantorum of St. Peter the Apostle (formerly the Schola Cantorum of St. Peter's in the Loop) has given the Church a wonderful musical gift for this sacred time of transition in  the her calendar. This album, Music for the November Feasts, is one of my favorite musical albums of all time - in any category.  This is definitely a "desert island" CD.  It is an ecumenical collection of sacred music covering centuries in a diverse mix of ecclesiastical musical styles: hymn and chant, English and Latin, old and new, a choir of men and women singing both a capella and with musical accompaniment.)

The other of my favorites is the Willan setting of p. 15 from TLH.  It was composed at the behest of the LCMS Commission on Worship (there was another one they commissioned but I cannot recall it at this moment - Bender, perhaps?).  I also sang this Willan setting first at Junior College in Winfield and came to love it dearly.  As far as I know only Redeemer Lutheran Church in Fort Wayne, Indiana, still uses this setting and it is, if I recall, their primary liturgical setting in use there.  I have accompanied this and found this absolutely delightful.  If I had had my way, it would have made it into LW and LSB.  In my mind it is far superior to the also beloved setting from TLH still with us as Divine Service Setting Three.  The Kyrie was initially available in Hymnal Supplement 98 by CPH but copyright issues have always been a problem with Willan's estate and much of this music is out of print.  The new hymnal committee elected to use a different Kyrie for LSB.

Both were issued by Concordia Publishing House in the late 1950s or very early 1960s -- both as an accompaniment edition and as a paste in booklet (the Divine Service) or single sheet (Te Deum) so that they could be attached to the inside or outside cover of TLH and made a permanent part of that book.  I would love to know if others have had any experience of these wonderful settings (outside the Concordia Colleges or Redeemer).  It would be great to know that they are alive and well.

While I am reminiscing, I would highly recommend Willan's Introits and Graduals for the Church Year for all those using the one year series.  It is of the highest quality and always in style -- plus, easily accessible for the volunteer choir without great musical ability!

You are correct. It was Jan Bender. I have that arrangement of the Common Service as well as Willan's arrangement.

So Anonymous is at St. Paul's in Denton? I was there in the mid-80s, and I gave thanks every day for the loving and gracious people there. There are so many stories to tell. I remember well my audition, which was on a Sunday morning. I had prepared twenty minutes of music as a prelude, and I was a little put out when the pastor interrupted me at 10:57, just as I finished a piece, and started the late service three minutes early; I had planned to play one more piece. After the service the pastor complimented me on my playing and, to my surprise, the search committee told me they were canceling the rest of the search and offering me the job. I accepted immediately and asked to meet with the choir so we could fix a rehearsal time. Besides our weekly rehearsal, I suggested that we meet at 10:40 on Sundays to warm up. Someone asked, "Don't you think we need more time?" I replied, "Isn't twenty minutes enough?" They looked at each other, and someone said gently, "Do you know that the service begins at 10:45?" I was mortified! I had kept the people waiting for nearly fifteen minutes after the scheduled start of the service, and the amazing thing is that no one--neither the pastor nor the search committee nor anyone else--said anything about it after the service. That impressed me a lot. Of course I should have double-checked the service time, so I apologized profusely to everyone I could find.

My first day on the job I asked to see the choir music. The secretary pointed to a filing cabinet. "It's all in there," she said. I went over to open it. "It's locked," I said. "May I use a key?" "Oh, no," she replied. "We lost the key years ago, and no one has been able to get in since then." I thought for a minute, then called a locksmith. Within the hour he had supplied two new keys for under ten dollars. Opening the cabinet was like finding buried treasure. I found a wealth of good music there, including some written by the former music director, Charles S. Brown. I wonder whether the music I eventually wrote for the choir is still there (it might not be identifiable, as I probably didn't write my name on it).

At the time, the church had a roof that leaked badly (on second thought, it leaked all too well!). I was almost always the first one at church on Sundays, and after a heavy rain I would often be mopping an inch of water out of the narthex; sometimes it even ran down the hall and into the church. One day the sky opened up as I was halfway to church on my bike. It was the kind of rainstorm I've seen only in Texas; I was soaked within ten seconds. By the time I arrived at church, my suit was just dripping onto the floor, which, miraculously, was dry that morning. There wasn't a chance my clothes would dry out before the service started; I mean, even my underwear was soaked. So I took off every stitch, found an extra alb in the closet, and wore it with nothing underneath. I put on my organ shoes without socks. I was nervous about vesting, because I was afraid the people might consider it too "Catholic." But so many people complimented me that day on the alb that I decided to wear it again the next week, and I continued vesting for as long as I was at the church. Besides looking good, it reminded me of the holy task I had before me. But this is the first time I have told anyone just why I starting vesting in the first place.

We had a great choir then--not large, but quite capable. And the pastor, Al Donsbach, was a joy to work with. So you've brought back some wonderful memories. Thank you!

Anonymous is Dagan Siepert! Sounds like you have a lot of great memories there! How long were you there? I am an organ student at UNT and have been Kantor at St. Paul's for 4 years now. I will begin seminary study (fingers crossed) at CTSFW next fall. BTW it is funny that you worried about being too "Catholic". I wear a cassock and pectoral cross and never thought twice about it haha! It truly is a wonderful congregation that has seen rough times lately, but the music has always been wonderful! God's blessings.

Also, is this the Joe Herl, "Worship Wars in Early Lutheranism" Joe Herl?? I would love to chat with you more! How might I get in touch with you, email or otherwise?

You can reach me at joseph.herl@cune.edu.

Is there anyway I can get a copy of those sethings of the divine service? PLEASE contact me at charltoncole1992@gmail.com