What does the mission statement really say? 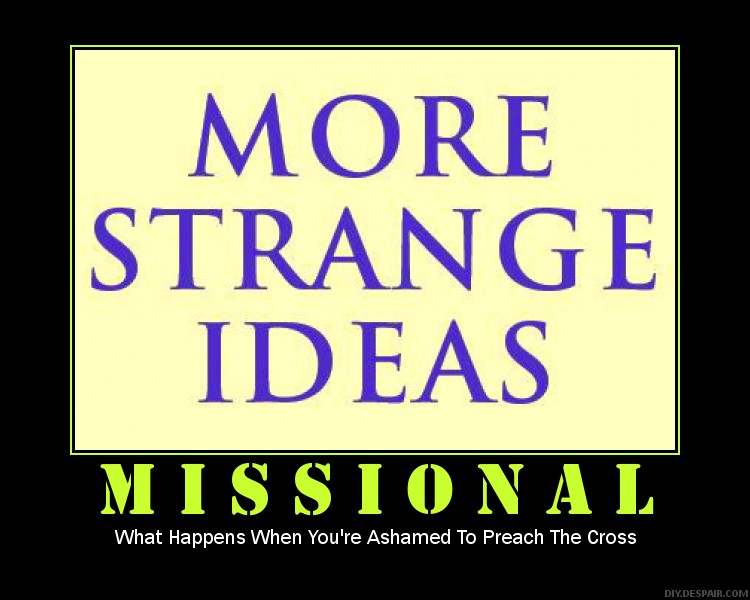 Now maybe I should not get all that excited about them -- seeing as most churches that adopt them promptly forget them or change them like a person does underwear.  How many emphases and how many mission statements have we been through in the LCMS in the past 32 years I have served in her?  It seems that we change mission statements or emphases about as often as we change Synod Presidents -- hmmm... could there be a connection there??  But, because some folks do pay attention to them, I pay attention to what they pay attention to.

Developing missional leaders in congregations and schools.  That is the mission statement of the District that is selling church property paid for by the good people of the District and designated for campus ministry.  It is a mission that has produced a large number of church workers and is a vibrant congregation in which the Word and Sacrament, the confessional identity of the Lutheran Church, and the liturgical tradition of Lutherans is highly esteemed.  It has a very strong focus on outside the borders of the congregation and sees itself as a mission as well as a congregation.  It would seem to be missional in every way you could imagine that term being used.  Maybe not.  Maybe there is another understanding of missional at work here.

In a private conversation I had with someone highly involved in the renewal of congregations plateaued or dying, the term missional was used quite often.  But it was not used in reference to me or the parish I serve.
Apparently, we are not missional.  Which makes me think that missional is not descriptive but prescriptive.  What makes you missional is that you do the above but without using the hymnal, the liturgy, the organ, the choir, unashamedly Lutheran in identity, confession, and practice....  In other words, if you look, act, sound, smell, and think Lutheran (in the typical way we use the term Lutheran), you are not missional.  Only those who think outside the Lutheran box, only those who worship outside the Lutheran box, only those who use music outside the Lutheran box, etc., are missional.  I wonder if we dropped the name "Lutheran," substituted a praise band for the organ, ditched the vestments, abandoned the liturgy, ignored the church year and lectionary, and looked and acted a little more like the prevailing culture.... would we be missional then?

Being missional has become a code word for the likes of congregations like "the Pointe" or "the Alley" or a hundred other similar missions that embrace all sorts of things in order to be cutting edge (technology, music, culture, dress, etc.) but seem uncomfortable in the vocabulary, doctrine, worship identity, and practice of the Lutheran Confessions.  If I am wrong, I would like to be set straight.  A few may venture to challenge this conclusion, but it seems many of the Districts of Synod have a particular idea in mind of what it means to be missional and it does not seem to have a lot in common with me or my parish....

So back to my point... I am not sure that mission statements are worth the time and energy we seem to put in them.  They are often pushed to the back shelf and do not seem to be all that significant in deciding what we do.  They are often so vague as to be meaningless.  They are often so laden with an agenda as to be foreign to our confessional identity. They seem intent upon ignoring the mission statement inherent in Scripture and implicit in the life of the Church through the ages -- God works through the means of grace and the Word and Sacraments ARE not only the source but the goal of our life as the baptized and believing children of God.  So.... why do we have them, again?
Posted by Pastor Peters at 6:01 AM

This way may be a goofy way to look at the situation, but the whole "missional" movement seems like a way to bypass the doctrine of vocation and employ a new doctrine that will rob the church of her vocation.

OK, who changed the definition of missonal on me? Your church fits it in my (apparently outdated) definition. If that's what meant by missonal these days, let them have it and the 80's disco ball while they're at it. In another 20 years the new missonal can join it. sheesh.

The word "humble" will not be used
in reference to the exploits listed
of you and your congregation.

There are probably several hundred
parishes with similar achievements
on the mission front in the LCMS.
But they do not have to list them
in public.

"There are probably several hundred parishes with similar achievements..."
Really? How many or what percent would that be (roughly)of six thousand plus LSMC congregations? Pr. Peters as I read him was simply trying to illustrate how "Witness, Mercy and Life Together" are lived out in and through his parish. One plants, another waters, but God gives the growth.

I have never understood mission statments either. They are but one aspect of secular managment tools being inflicted upon the church. At this point, some 20-30 years since their introduction mission statments are ubiquitous, and for the most part meaningless. Most Americans can see right through prefabricated slogans and buzzwords like 'missional' for what they are, crass and pretentious attempts to make the church look at least on the surface, organized, professional and culturally relevant.

I certainly did not mean to extoll the exploits of our parish or to imply that others are not equally involved in the work of the kingdom or moreso. The point was to illustrate the way the word missional has taken an agenda in which the ordinary things that might describe any parish's active life and work in service the Lord might not qualify as "missional." I apologize to those who thought I was boasting but I thought I made it clear that what the focus of the attention was -- what does missional mean if it does not apply to an ordinary Lutheran parish doing ordinary Lutheran things in the work of God's kingdom?

You're exactly right, PP. "Missional" is simply a code word, and like most code words, obscures the nature of that for which it is code, even to many of those who espouse it.