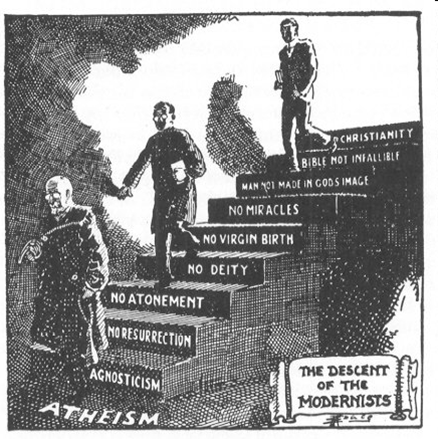 The late Cardinal George of Chicago once said, “Liberal Christianity is a failed experiment.”  The only people who do not know this are liberals.  True enough, every church has a liberal faction or a progressive wing.  These folks are the ones who purport to care for people more than doctrine and who are willing to do whatever it takes to make sure the church survives and even flourishes.  At the same time, however, the people they care for are left without grounded hope and real truth and the church that survives looks little like the church of old and is an echo of the culture, though slow and behind the curve.

Liberal Christianity is always late.  It is late to jump on social trend and late to adopt fads of music, psychology, and culture.  It is tardy to the party but it does not see it.  When folk music finally entered the church, it was on the way out of musical fashion.  Contemporary worship is contemporary only in the minds of the boomers who live in the past.  Cool is lukewarm and the shine has worn of the chic for those who try to keep up with pace of change.  Everyone outside the church knows this and finds it all not a little amusing -- except those who keep putting the nickels in the praise bands and singing the same tired old refrains.

Liberal Christianity is neither new nor fresh but old and tired.  It does not innovate but tries to sustain a moment in time which has faded from view in the landscape of everyone else.  It lives in the past and confuses this past with the future -- not the ancient past of Scripture or the early church but the recent past of memory.  The way we did it when we were young. . .  It is not simply theological but liturgical, not simply about the faith but about politics.  It loves freedom but eschews those who refuse to march to its dated tune.  Its freedom is the worst possible bondage.

Liberal Christianity is not an ideology or even a philosophy but a methodology.  It is adaptive.  It deals with sin by removing behaviors from the category.  It deals with death by making the most of this life.  It deals with truth by substituting feelings.  It deals with fact by focusing on relationship.  It adapts itself to the world around it.  It adopts the sexual ethic of the moment (usually a protest against the past).  It adopts the cause of the moment (such as climate change).  It is individual and makes the individual not only the center of Christianity but the measure of truth.  It loves relevance but fails to see that it is irrelevant to the past that went before and the future unfolding right now.

In the end, liberal Christianity is neither liberal nor Christian.  It is a betrayal of the true liberality of love that flows from the Christ and His cross and it is a distorted Christianity that bears little resemblance to the fathers of the faith and offers little hope for a real future.

Wow......I can't even begin to imagine how many liberal "Christians" will be offended by what you just wrote. On your behalf, I will say to them, "YOU'RE WELCOME!!"

As Romans 12 states it, Liberal Christianity conforms to the pattern
of the world and caves in to whatever is popular in current culture.
Once the Bible is no longer read as God's Word and remove all the
miracles of God like the Virgin Birth of Christ and the Resurrection
of Christ, then you have become an atheist.

Now Liberal 'Christianity' is being promoted by Francis the Talking Pope.

As part of the fallout of Pope Francis’s meeting with 34 Chilean bishops, many of whom have been accused or at least suspected of covering up cases of clerical sexual abuse and destroying damning evidence, and all of whom have offered their resignation, the survivors who met with Francis in April continue to share bits and pieces of their encounter with the pontiff.

Cruz is one of three victims of Father Fernando Karadima who were in Rome in late April for a weekend meeting with Francis. His comments came in an interview with Spanish daily El Pais.

Carl,unfortunately for us Catholics, we are burdened with this pope. There must be a reason that he was placed in that office although it eludes me and a good many others. They and we will be called to task. Pray for us and for others like yourself. We need to fight together for what is true and good.

It seems to me that some liberal Christianity is seeping into even fairly conservative church bodies within the LCMS. . Every congregation is not the same. Some pastors want to relate to other denominations and interact, and the result is they absorb more liberality and begin to question orthodoxy or desire to water down timeless doctrines. I fear this will cause fissures in the LCMS in the future. I believe there is an identity crisis growing in our Synod.

The Descent of the Modernists

I would argue that Liberal Christian denominations represent the man in the middle. Evangelicals are at the top of the stairs, but they are descending fast.

Behold, one of the most popular Evangelical preachers in the USA, Andy Stanley, rejects the 10 commandments and the Old Testament:

As every Protestant congregation dreams of becoming the next mega-church, it is only a matter of time before they all reach the bottom of the stairs. Naturally, some will arrive sooner than others.

John: Some LCMS congregations may be lured into following the Protestants down the stairs, but they remain stuck in a holding pattern near the top. For example, I remember my LCMS congregation studying Velvet Elvis and watching all the NOOMA videos. Rob Bell later published "Love Wins" - which taught Christian universalism. You guessed it: As a result of "Love Wins", Rob Bell was instantly abandoned and forgotten by the people in my LCMS congregation. True, LCMS pastors may respond by choosing to follow a different Evangelical author - until his theology is later discredited.

I hope the LCMS has the patience to wait another 10-15 years for the rest of Protestant Christianity to have their own "Rob Bell moment". At that point, even the most diehard Lutheran fan of the mega-church model will run to the very top of the Modernist stairs - and stay there!

From Jeff “Wolf”worthy: You may be a liberal Christian if you 1) are pro-choice 2) are OK with same gender marriage 3) believe in macroevoluton 4) subscribe to man-made climate change 5) subscribe to the motto, “Deeds, not creeds” 6) believe the Constitution of the United States and the Bible are “living, breathing” documents 7) think Doctrine and practice are negotiable 8) are certain Theologians today have an advantage over the Church fathers of the distant past 8) believe mission out-weighs confession 9) are impatient with those who don’t get on board with their vision casting pastor 10) can admit that you haven’t opened a Bible in you don’t know how long.

I cannot understand how any Christian can be for abortion or same gender marriage. It is troubling but true in our society today. Progressives have infiltrated the church, having already tainted the culture.

I agree 100% with your article. Most Americans are not drinking the liberal kool-aid. What to do? Why, double-down of course! Force acceptance (or at least toleration) of liberal values in the public schools, and those misguided traditional Christians will soon return to the liberal churches!

The link below is additional proof we are living in the last days. By the way, this is something pushed by Chicago over the rest of (conservative) Illinois:

And yes - California is the only state that already has such a law. Are private schools exempt from these laws?