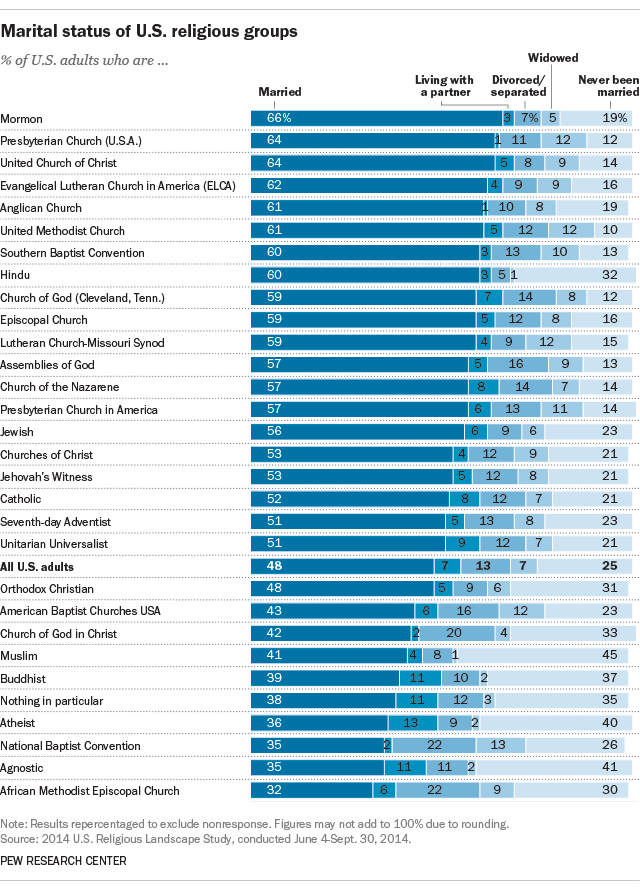 Wow.  Surprises and no surprise.   Generally Christians choose marriage and do not have a high number of single adults divorced, widowed, or living together.  One should have been able to predict that in most cases.  What is a surprise is that some churches clearly do not reflect their gender identity  image.  The ELCA which presumes to be all about diversity and in which voices agitate all the time against heteroism, monogamy, and the primacy of marriage, well, it looks pretty traditional on the shape of it (at least back in 2014).  On the other hand, what is concerning is that predominately Black churches appear struggling both with marriage and divorce but also have a very high number of singles -- virtually the same as the number of married among the AME.  Perhaps some of the statistics indicating that gay and lesbians are choosing marriage (some say about 60%) also contributes toward the numbers in those churches that affirm same sex marriage.

The highest numbers in the single adults (never married) category go to Muslim, Agnostic, and Atheists at 40-45% with the Buddhist not far behind at 37%.   Some of those groups have more never been marrieds than currently married.  Now that is something to think about.  If you nave nothing to do for a week, you might peruse the whole study.  You can find a summary here.  Or read the whole 200+ pages here.

Perhaps the greatest problem in all of this is the fact that the non-denominational evangelicals are not singled out.  It would be interested to see where the folks in this group fall.

Don’t spend another minute fighting with your spouse in pointless
passive aggressive behavior. This solution will set your mind
at ease once and for all.

There’s a simple, paint by numbers formula for saving your marriage
and it can be working for you in less than an hour.

Take back your relationship AND your life!

Secret to Marriage Reconciliation – Take Back Your Life

Talk to you soon,