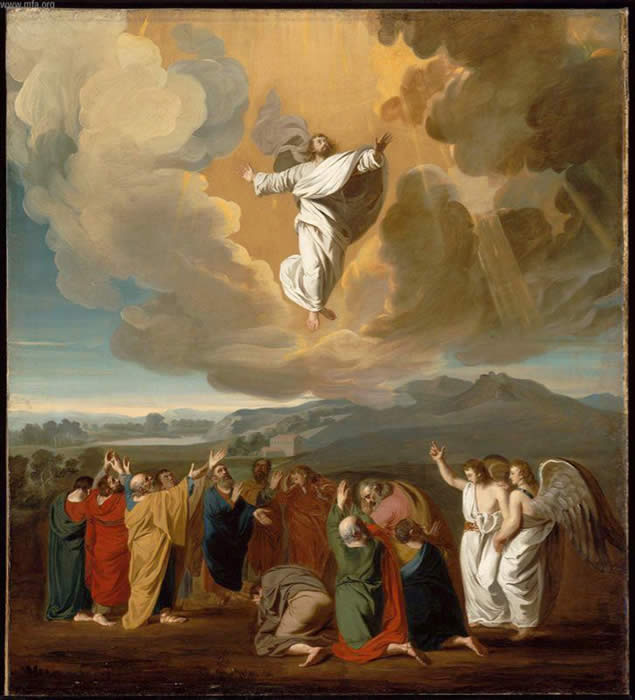 Sermon preached for the Ascension morning service, Thursday, May 9, 11 am.

How could the disciples watch Jesus float away from them and then still return to Jerusalem with great joy?  They had lost Him once to death and the shock of His resurrection was still reeling in their hearts and minds.  And now they were losing Him again.  How could they be joyful at such a prospect?

The Ascension is one of the most misunderstood events in the life of Christ.  It is often celebrated as the day of Christ’s absence.  Like Enoch and Elijah, He is taken away never to be seen again.  What we are left with is memory and feelings to console us, comfort us, and sustain us until the day when we see Him again.

That is became He has departed our visual presence to, as St. Paul says in our Epistle, “fill all things.”  He has ascended not to leave but to fill us and all things.  He has not left us but has taken up His rightful place and purpose as the One who fills “all in all.”

No where is that more pointed than in the Church’s life and worship.  We come at the bidding of Christ whose voice still speaks but in His Word.  We are absolved of our sins by the voice of that Word that speaks and does what it is that this Word says.  We are washed in the water of the Lord in which He is and through which He works to kill and to make us alive anew, in Him.  We are fed and sustained for this new life to eternal life in the broken bread of His body and the poured cup of His blood.  Christ is not absent to us but present.  And we see Him with the eyes of faith that trust in His promise.

This is why the disciples could return to Jerusalem with joy.  No one who has stood in the airport or train station or at the side walk as a car pulls away takes joy in a farewell.  We always fear that as we see our loved ones go, it may be the last time.  Sometimes it is.

But Jesus has not bidden farewell to us.  He has ascended to fill all things.  In particular, the things that come with His promise and power – the Word and Sacraments.

No one who grieves is content with memories.  They are at the same time painful and wonderful.  They fade and the things we yearn to recall most of all become distant to us.  Had the disciples been left with a memory, they would have been empty of any and all joy and the words and works of Jesus would have become a memory, a fading memory to them.

So as Jesus ascends, He promises the Spirit.  The Spirit who will work faith in our hearts, who will point us to the places where Christ is present to us, who will lead us to trust in what that Word says, that water does, and that bread and wine gives.  The Spirit brings to remembrance what Christ has said and done – not as the renewal of a mere memory but as that which is believed, confessed, and taught, equipping them to be the witnesses He has said all along that they will be... that we will be.

We come together not as people whose joy is a memory, whose purpose is to keep a memory alive so that it will not be forgotten.  No, we come together to meet Him who fills all in all.  Who fills His Word so that He speaks to us still.  Who fills the water that kills the old person encumbered with sin and death and brings us forth new in Christ, wearing His holiness and living a life death cannot steal.  Who fills bread and wine with the flesh for the life of the world and the cup of blessing in which we taste eternity.

Ascension is radically important to our faith... even though many churches will be shuttered today and those open will have few comers.  Christ has not left us or abandoned His new creation.  He has ascended to fill all in all.  And we hear that in the words of the collect.  For the promise of His ascension is that we too ascend in Him and to Him, from despair to hope, from sin to holiness, from wounds to healing, from weariness to renewal, from weakness to strength, from death to life....  Amen
Posted by Pastor Peters at 6:00 AM