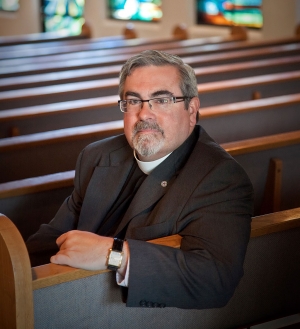 In what we all knew would come in time has come relatively sooner than expected.  A gay ELCA clergyman and professor has been elected Bishop.  You can read it all below.  Note the following anomalies:  first he has been a pastor in the ELCA for twenty years, serving congregations of the ELCA BUT without ordination -- a protest against the then restrictive policies against the ordination of actively gay and lesbian candidates.  So he served as a "lay" pastor?!?!?   Second note that he has been ordained as a pastor for only two years so this represents a rather quick climb up the hierarchical ladder and signifies that he was not necessarily chosen as the best of all candidates but to make a particular statement.  Some have been frustrated that the world did not change overnight and the ranks of leadership fill with gay and lesbian clergy once the ELCA lifted the ban in 2009.  So, some have argued, this step represents the full implementation of that change nearly 4 years ago... and not quickly enough for many within that church body.  So the ELCA joins its partner church body the Episcopal Church in now having gay clergy represented at every level of church leadership.  While this is something some would celebrate, it represents, in the eyes of this writer, a sad day for Lutheranism in the USA.


The Reverend Dr. R. Guy Erwin was elected bishop of the Southwest California Synod of the Evangelical Lutheran Church in America (ELCA) on the sixth ballot becoming the first publicly-identified gay and first Native American bishop in the history of the twenty-five year old denomination.

Erwin’s election to bishop comes just two years after his ordination as pastor in the church. Erwin has served congregations in the ELCA for over twenty years but chose not to be ordained until the ELCA changed its policy regarding gay and lesbian ministers. The Evangelical Lutheran Church in America voted in 2009 to ordain gay and lesbian people in publicly accountable, lifelong committed same-gender relationships. Erwin was one of the first publicly-identified gay pastors in the ELCA to be ordained after the 2009 changes. There were seventeen publicly-identified LGBTQ people who were extraordinarily ordained outside the regular ELCA process prior to the vote, and subsequently received onto the ELCA roster following 2009.

Bishop-elect Erwin currently serves Faith Lutheran, Canoga Park as interim pastor and is Professor of Religion and History at California Lutheran University. Erwin is a native of Oklahoma and an active member of the Osage Tribe of Indians. Erwin and his partner Rob Flynn are members of St. Matthew’s Lutheran Church in North Hollywood, CA, and are very active in Lutheran circles locally, nationally, and internationally. He will be installed as bishop September 21, 2013 and will serve a six year term.

Why is this a surprise? The ELCA are heretics and have been for a long time. If the LCMS were smart, they would cut off ALL relations with them. The Orthodox would be wise to do the same. There is no point in continuing to work or even dialogue with people who have so forsaken the faith. Pr. Harrison would be wise to announce an immediate severance of any ties immediately.--Chris

i hope that such actions by the ELCA will continue to help motivate the NALC and the LCMC to become as confessional as the LCMS.

I'm a non-denominational Christian, not a Lutheran who enjoys reading your blog posts. But after reading about the ordination of a homosexual Lutheran pastor, I nearly ceased consideration of Lutheranism as a denomination worthy of further exploration.
Thankfully I decided to check what ELCA meant and was reminded that you yourself are not part of that form of Lutheranism.
But unless you make it clear that you are LCMS Lutheran as distinct from the ELCA, you will be considered to be the same denomination by non-Lutherans, which will only harm your denomination.
You may want to make it clear on your Blog banner that you belong to the LCMS!

As people continue to stampede out of the the ELCA and TEC (Episcopal Church) in droves, we can only hope that both church bodies will merge to form a new denomination with the word "Lutheran" excluded from it.

Wilken: "Is apostasy too strong a word to describe what we’ve watched over the last — better part — of the decade that culminates this afternoon in the Evangelical Lutheran Church in America?"

Harrison: "No, it is apostasy. There’s no way around it. It gives me great pain to say that, but there’s no other word for it."

I saw this coming twelve or so years ago when the ELCA had their full communion with the Episcopal church and our new parish pastor told our middle school boys that it is not a sin to be homosexual. Anyway, C.F.W. Walther said it best. If a church doesn't follow the Lutheran confessions, it isn't Lutheran, if it doesn't believe the Bible, it isn't Christian. The ELCA is deep in apostasy, as our Rev. Harrison has noted.

I am a member of the ELCA and could not be prouder of our faith for including all, as Jesus did. My prayers are with those who live within closed minds and hearts.

Annon #1 you're confusing a cliche with scripture (and for that matter the advertising slogan for the United Methodist church). Acceptance and inclusion are not the same thing as justification and sanctification. Jesus didn't die on the cross so we could remain in our iniquity trespasses and sin, but be brought to life and freed from sin and to grow in holiness through the work of the Holy Spirit.

Isn't it time to stop placing judgement and ridicule upon others?

I am Mariam used every single spell worker on the internet, spent untold amounts of money and discovered they are all fakes...i was the fool though; doing the same thing over and over again and expecting different results. In the end, I decided that I wanted a tarot reading to know what my future held for me; I contacted a woman who lives locally to me and she told me about a man named (Priests Abija); he does not advertise on the internet, has another job for income, has no set prices, makes no false promises and refuses to help anyone that cannot be helped and even helps for free sometimes, he will give you proof before taking money. He is a wonderful man and he was the only person who actually gave me real results. I really hope he doesn't mind me advertising his contact on the internet but I'm sure any help/ extra work will benefit him.contact him here as +447053820826 or spirituallighthealing101@live.com He travel sometimes.i cant give out his number cos he told me he don’t want to be disturbed by many people across the world..he said his email is okay and he’ will replied to any emails asap,love marriage,finance, job promotion ,lottery Voodoo,poker voodoo,golf Voodoo,Law & Court case Spells,money voodoo,weigh loss voodoo,any sicknesses voodoo,Trouble in marriage,HIV AIDS,it's all he does Hope this helps everyone that is in a desperate situation as I once was; I know how it feels to hold onto something and never have a chance to move on because of the false promises and then to feel trapped in wanting something
more.