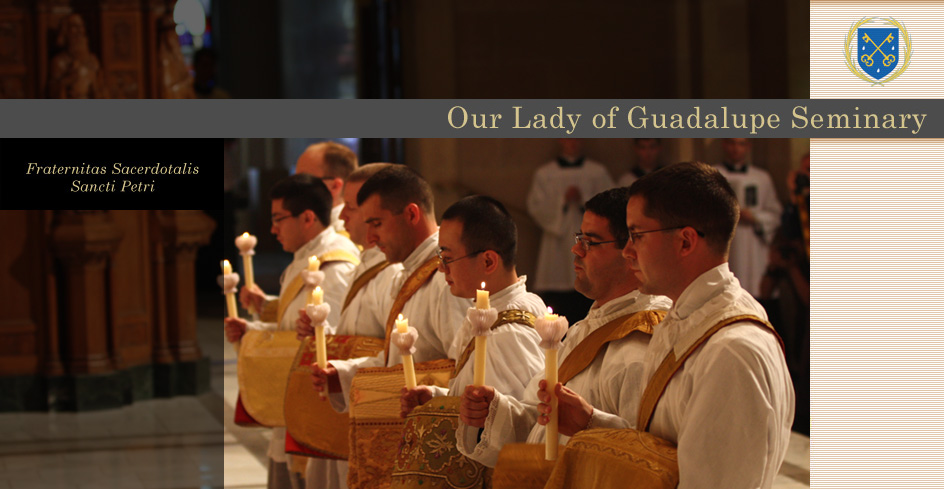 Click here to hear a PBS story on a FSSP seminary in Denton, Nebraska, that had a 13 week chart topping CD of Gregorian Chant.

What stuck out to me was this statement:  The chanting and the Latin lessons are part of the daily routine for the 90-some seminarians who will live and study here for seven years.  In other words, at a time when it seems most Protestant churches are seeking out ways to bypass seminary entirely or in part with online preparations for their candidates for the ministry, this seminary already has a longer program than any of them (7 years) and is intent upon forming the piety of their seminarians as much as their pastoral character.  Now that is something to reflect upon. . .

The obligatory Latin lessons and chanting study are part of the early period of their study, time referred to as the contemplative phase.  I am not sure that much time is ever spent upon this aspect of piety at the seminaries I know.  Concordia Theological Seminary certainly has the nod but this is less as the formal study of the students than the religious life of the school centered in Kramer Chapel and the liturgy of the hours, the weekly Eucharist, and the daily chapel.  It is there for the students but it is not an obligatory exercise in the way the FSSP seminary requires.

One of the hardest things to face a pastor upon leaving seminary and arriving at his first call is loneliness.  Yes, the loneliness of being apart from the friendships created at seminary and the support of professors but more than this.  The spiritual loneliness of having had a rich and profound devotional life centered in the Chapel and lived out together under the Word and at the Table of the Lord is gone.  It is replaced by the fact that you, as pastor, are now the preacher, teachers, presider, and chief intercessor of the parish.  You go from being the one who is daily fed to the one who feeds and it is very easy to be only a giver and seldom fed.

Pastoral formation is very important but the spiritual formation of the pastor is just as important.  Nearly everywhere I go pastors complain about not finding time for their own devotional lives and how easy it is to be in the Word from the professional perspective of a teacher and preacher and how hard it is to be in the Word devotionally.  The resources we have today are many but the discipline of those tools is generally left to the pastor and that is the problem.  Marriage and family are just as demanding upon the pastor as the parish and it is too easy to defer to the needs of home and congregation and not give piety and spiritual life the attention they deserve.  The pastor is also the chief devotional leader in his household as well as the congregation.  I know that was and is true for me and I know that it is a very common issue among our pastors.

Having this as an intentional part of seminary is both wise and practical.  For surely these will be with the seminarian long into his pastoral life.  We would do well to consider how to draw upon the rich resources of our own liturgical and devotional tradition and form this into the curriculum of our seminaries.  As I said earlier, I know that the chapel is not only the geographical center of the Ft. Wayne campus but its beating heart.  That said, a curriculum which formally includes piety and spiritual formation is a worthy and necessary cause especially for Lutherans today.

According to the Papist Church website of Our Lady of Guadalupe Seminary:

"The Priestly Fraternity of St. Peter (FSSP) is a Society of Apostolic Life of Pontifical Right canonically established by Pope St. John Paul II in 1988. The particular charism and mission of the Fraternity is to offer the Sacred Liturgy, including the Holy Mass and the Divine Office, as well as the sacraments, in all of their traditional solemnity, according to the Latin liturgical books of 1962.