The Last Vestiges of Romanism or the Consistent Voice of Lutheranism 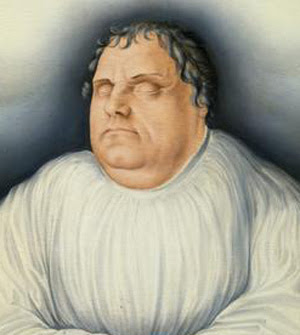 Lutherans have always had a, well, problem understanding themselves. It started with Luther. Unlike Calvin and his Institutes or Aquinas and his Summa, Luther is relatively disorganized when it comes to systematizing his theology. You can find contradictory statements within Luther that, it seems, Luther was okay with but the Lutherans who have followed him are not so okay with. So Lutherans have debates about early Luther vs late Luther, the young Luther vs the mature Luther... We would like a Luther who was at least consistent and if not, then at least consistent in a certain direction so that we could predict his evolution of thinking. But instead we have a Luther who is disjointed and inconsistent, unorganized and even contradictory (as much as we can tell of him, since he is not here to defend himself).

It seems that for much of Lutheranism we have fought over which Lutheranism is the authentic Lutheranism -- the one, for example, which is perfectly comfortable talking about Mary's ever virginity or maintaining the ceremonies of the Mass (save for a few which contradict the Gospel) or is willing to keep the Pope if he will allow the Gospel to be preached or the one with four sacraments instead of two... OR the one that has been shaped by an identity fully comfortable in its separation from Rome, antagonistic toward things catholic or Popish, one which speaks as if Lutheranism did not exist prior to Walther or Pieper or Koehler, or the one which feels more at home in generic Protestantism than in evangelical catholicism. So, in matters liturgical and even theological we have some Lutherans who insist that some of the statements of Luther and other Lutherans were before the last vestiges of Romanism had been cleansed from Lutheran identity instead seeing Lutheranism as a consistent voice for conservative reform in which the things received from tradition hold a high and honored place to be challenged only when they prevent the Gospel from speaking clearly.

It is, perhaps, the genius of Luther and Lutheranism that we are not a systematic faith as much as we are a practical faith, shaped by the urgency of a need to reform but a conservative reformation principle which refuses to toss things out just because people don't like them or they do not fit with the prevailing mood among Protestants. In this respect, Lutheranism remains heavily in debt to Rome -- especially for those things in which there were not disagreement or those things which required no theological honing separate from the received faith of the day. It is in this respect that Lutheranism is sort of like the early Church prior to the time when by council and edict the faith was codified (I do not mean creedally here but by the concerted theological effort at making the faith reasonable, organized, and systematized).

It is also our weakness as Lutherans that for many, many things we cannot appeal to a uniform voice but find, instead, conflicting and even contradictory statements among Luther and the great Lutheran theologians. And without a magisterium to define this, it means that each Lutheran can identity with his or her own perspectives on many (generally non-essential) questions. It also means that Lutherans tend to argue a great deal -- which would not be a bad thing were it not for the fact that some arguments become vicious and bitterly divisive.

In matters liturgical it is this conservative reformation principle which is being questioned most of all. Instead of keeping what was and removing it only when and if it conflicts with the Gospel, the operating principle among many Lutherans is that we begin with only that bare minimum and add to it when and what we want -- a position which is basically Luecke's Style and Substance argument. According to this way of thinking, if you have a Law/Gospel sermon, then whatever else is included in the worship service that does not conflict with the Gospel is authentically Lutheran (here meaning mostly contemporary songs and a distinct lack of liturgical form or content -- even the creed and the Our Father)... If you get it right in the sermon, the rest does not matter so much. But of course this violates that conservative liturgical principle of our Confessions and our confessors. They would insist that the form of the Mass with its historic parts are in and of themselves expressions of the Gospel and the guarantee that the Law/Gospel voice of God speaks when we are gathered in His name -- so that it not be dependent solely upon the sermon or preacher.

Today in theology and in liturgical practice, we find ourselves caught between very different camps who come with the same perspective -- what is the least amount we may believe or the least amount of identity present in worship that we can get away with as Lutherans. For the ELCA this meant reducing the Gospel to a principle that allowed it to violate the clear word of Scripture... for Missouri is often means that what happens on Sunday morning is a free and open choice of the Pastor, the parish, and the people -- their wants, desires, and what they feel comfortable with... Both sides demand a clear word from the Confessions to challenge them, and lacking one, insist that their version is as legitimate as anyone else's. What we have forgotten is the conservative reformation principle that manifests itself with a very careful take on what we have received (tradition) and how we have worshipped (liturgy).
Posted by Pastor Peters at 7:22 AM

As I read the preparatory stuff for the Model Theological Conference on Worship in a couple of weeks, I see no answer to this question: "OK, so you want to ditch the liturgy. What are your measures for avoiding heresy or at least spiritual and doctrinal starvation?"

Cantor Philip Magness has employed more "contemporary" tools in Bethany's worship, such as Taize, but he is very careful to remove any Word-less spirituality. Other people are going to need guidance to achieve this.

Indeed Pastor, very solid thoughts and worth meditating and acting upon. Thank you.

"...the one, for example, which is perfectly comfortable talking about Mary's ever virginity..."

It depends on whether that perfectly comfortable talking about Mary's ever virginity is as a pious opinion or as an alleged doctrine.

"...or is willing to keep the Pope if he will allow the Gospel to be preached..."

It depends whether one signs his name as "Philip Melanchthon" or not.

"...the one that has been shaped by an identity fully comfortable in its separation from Rome, antagonistic toward things [C]atholic or Popish"

9] Therefore the Church can never be better governed and preserved than if we all live under one head, Christ, and all the bishops equal in office (although they be unequal in gifts), be diligently joined in unity of doctrine, faith, Sacraments, prayer, and works of love, etc., as St. Jerome writes that the priests at Alexandria together and in common governed the churches, as did also the apostles, and afterwards all bishops throughout all Christendom, until the Pope raised his head above all. 10] This teaching shows forcefully that the Pope is the very Antichrist, who has exalted himself above, and opposed himself against Christ because he will not permit Christians to be saved without his power, which, nevertheless, is nothing, and is neither ordained nor commanded by God... 14]...Therefore, just as little as we can worship the devil himself as Lord and God, we can endure his apostle, the Pope, or Antichrist, in his rule as head or lord. For to lie and to kill, and to destroy body and soul eternally, that is wherein his papal government really consists, as I have very clearly shown in many books. [Smalcald Articles, Part II, Art. IV]