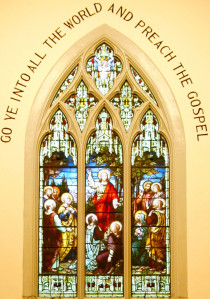 Perhaps the greatest division between the so-called missional pastors and church leaders and the confessional ones is personality; it has to do with whether they look at the outcome or the process.  The goal oriented missional leaders have an outcome in mind.  They look to achieve some level of measurable success in what they do.  These folks tend to see the Church as a project and the ministry as a task.  They often articulate their goals in clear, objective, and measurable ways.  The process oriented confessional folks seem to have the process itself as their goal.  They are less concerned with measurable or objective indicators of success and tend to define success in terms of faithfulness in the tasks -- tasks which are not the means but the goal itself (Word and Sacrament).

Missional folks look at the Kingdom of God as a problem or challenge placed in their laps.  Their task is to grow the Kingdom, to bring people to faith, to express more fully the diversity of the world in the Church, to build up the numbers, to do what it takes to make a difference.  As a result they are less ideological, less doctrinaire, and less oriented toward keeping what was passed on.  They are, however, very interested in being creative, in doing what works, and inventing new things as a sign of vitality.  It is not that they do not believe doctrine is important but that it's importance lies not in its unchanging truth but in its power to create an outcome -- i. e. make a Christian.

Confessional folks see the Kingdom of God as a given -- it was there before they arrived and it will be there after they leave but by God's design and promise.  It is their task not to grow it but to faithfully deliver the means of grace by which the Kingdom grows.  Statistics or outcomes are less significant in their view than the faithfulness to the Word and Sacraments.  Keeping faith with those who came before is just as important as passing on the unchanging sacred deposit whole and undefiled to those who come after them.  It is not that they don't want the Church to grow but that they believe the growth of the Church happens in a variety of ways not all of which are specific or measurable.

I will admit to being drawn to both.  I have goals for my parish.  I have things I want to see happen.  But I find it hard to lead because I spend most of my time on pastoral care things.  In the end, this is not a distraction to me but the real thing that endures.  My lasting work is not in seeing what is not and helping people get there but in delivering the Word and Sacraments to God's people.  My real goal is not growing the Church but faithfully delivering the means of grace that grow the Christian and grow the Church -- God's work, not mine.

In the end, I have discovered that being a pastor is a lot like caring for a house and a family.  You do the same things over and over and over again.  How many sermons do you preach!  How many services do you lead!  How many classes do you teach!  How many visits do you make!  It is like my mother and the mind boggling number of times she has done laundry, cooked meals, cleaned the house, and everything else that is continually done to keep the household functioning over her life.  Although I am tempted to point to a completed project and say "this is what I did," the real thing I do is not an outcome I can point to or a goal I can fulfill but the means of grace delivered to the people of God over and over and over again.

If you can be happy doing this, you will be a good pastor.  If you long in your soul for goals to work for and success to measure, the pastoral ministry is probably not your thing.  God never relinquishes the power to us but insists upon using His power through our work, words, and actions.  But it always remains His to do.  Though I am instinctively a project person, I have learned that the process is itself a goal, my goal and purpose.  And I have learned to be content in that in a way that would have surprised the me who first set foot in a parish and was called Pastor.
Posted by Pastor Peters at 6:00 AM

I think it is necessary to be missional and confessional at the same time. The practical ways of moving the church are an aspect which can not be overlooked. Think of Nehemiah as a preacher who was missional and confessional. He wanted the Jews to return to the Lord, and so he set about this task with a strategy which included the practical task of rebuilding the walls of Jerusalem. He led. He encouraged. He preached. He dispensed duties, assigned subordinates, managed and oversaw the process, and he was doing as the Lord's servant raised at a specific time to accomplish a specific purpose to the glory of God. Pastors today can be missional and confessional. God may give some better management gifts, while others are better preachers, but it is all good.