You shall make a mizbayach for burning incense; make it of acacia wood. 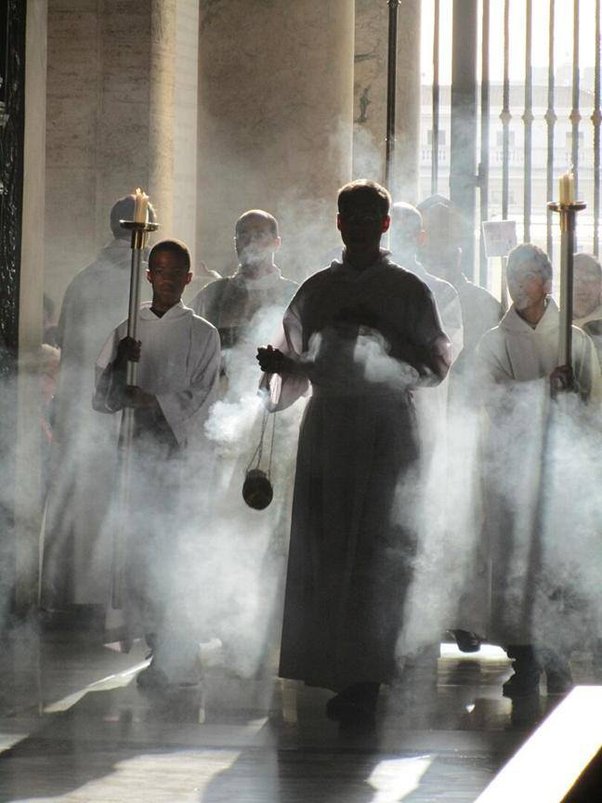 After giving instructions to the Children of Israel about the priestly garments or vestments to be worn by those who minister in His temple, the Lord God proceeds with instructions and a description of the golden altar for offering incense. Incense was an essential element of the Temple service -- a sacrificial offering burned twice daily. On Yom Kippur, the Day of Atonement, the Kohen Gadol (High Priest) would insert a pan of burning incense into the Holy of Holies before entering, waiting until the area was full of fragrant smoke.  Though the incense had the practical use of covering or distracting from the overpowering smell of death and burning flesh so pervasive in the Tabernacle with its sacrificial offerings, it also symbolized the prayers ascending to the throne of God (Psalm 141).   This is surely reflected in the New Testament, especially in the heavenly vision.  There John saw that the elders around the throne “were holding golden bowls full of incense, which are the prayers of God’s people” (Revelation 5:8; cf. 8:3). As Zechariah the priest was offering incense in the temple in Luke 1:10, “all the assembled worshipers were praying outside.”

The incense with its exclusive recipe of 11 ingredients was offered morning and evening on its own special golden altar in the Holy Place, in front of the veil.  At first this was the special vocation of the High Priest alone.  By the Second Temple, the lesser priests also offered the incense, chosen daily by lot for the office, as was Zachariah the father of John Baptist. This incense burned not as ritual satisfaction of command but as the expression of the inward faith.  When Israel maintained the temple rites but was disobedient to God and their hearts empty of faith, God said through the prophet, “Stop bringing meaningless offerings! Your incense is detestable to me” (Isaiah 1:13).   It is not the burning of incense per se or the discipline of its timing but the accompaniment of this practice with faith that delighted in the Word and will of God, walking in His ways, and expected His mercy that marked this and every ritual practice commanded by God.

My point is this.  As Israel saw the smoke arising from the Temple and was comforted in travail and humbled in triumph, so it is important for us to pray and to count on the prayers of our Great High Priest, interceding for us with His blood, as the world around us wallows in its confusion of the obvious, its uncertainty of the truth, and its lies that replace the Word that endures forever.  Do not think your prayers are too little or not enough.  For Christ's own intercession is no small thing but one of the most profound and powerful works of His ascended and glorified position at the right hand of the Father.  He has given us this privilege and it has become our duty and delight to offer up prayers and petitions, supplications and thanksgivings, not here and there but continuously, without end, in the confidence that they not only rise but are heard in mercy and answered with grace to sort us out and sort out our times within the hand and will of God.  If for this reason only, incense ought to be burned in the churches of those who believe this still (although I am sure some readers will disagree).  If the world does not need to see the smoke, we do.  We all do.  So that we know as Israel once did that our prayers ascend to His throne of grace and that Christ brings those prayers with His own to the Father.  This is of great comfort but it is also great assurance in a world without much these days.

I enjoy the use of incense during meditation and prayer. The image of prayers raising "like incense" is comforting. As Pastor Peters says "This is of great comfort.... but it is also great assurance in a world without much these days."

Your words give me peace. I think of the incense that were in the Temples of Solomon and Herod and which will be in the Temple of Revelation and I think of our Worhip here in Kingsport with it's Clouds of Witnesses gathered around us...and I am in awe...every Sunday