The Domino Theory Is Still True. . . 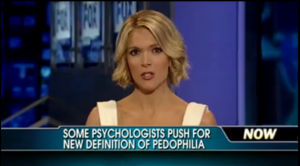 In the midst of a search for legitmacy, acceptance, and full incorporation, the movement for gay marriage and the advocacy of the GLBT lifestyle has found some unexpected but not unanticipated allies -- those who believe that pedophilia should be categorized as a sexual orientation.

You can read it here or another blog that passes on the story here.  I have copied a couple of paragraphs below to show what is happening.

In 1976 the National Council for Civil Liberties, the respectable (and responsible) pressure group now known as Liberty, made a submission to parliament's criminal law revision committee. It caused barely a ripple. "Childhood sexual experiences, willingly engaged in with an adult," it read, "result in no identifiable damage … The real need is a change in the attitude which assumes that all cases of paedophilia result in lasting damage."


"But there is a growing conviction, notably in Canada, that paedophilia should probably be classified as a distinct sexual orientation, like heterosexuality or homosexuality. Two eminent researcher testified to that effect to a Canadian parliamentary commission last year, and the Harvard Mental Health Letter of July 2010 stated baldly that paedophilia "is a sexual orientation" and therefore 'unlikely to change'."
Posted by Pastor Peters at 6:00 AM

As with "gay marriage," paedophilia would have to gain widespread acceptance in Canada prior to it becoming law in the USA. I have never understood the militant, California-style political correctness of Canada. What are its origins?

Legally, can a child offer consent?

Apparently, the definition thst needs to be re-written (officially, that is) is that of "insanity." Here is a good place to begin. P.S. Having just viewed HBO's "Mea Culpa," the suggestion that pedophilia be somehow "normalized" demonstrates clearly how insanehumanity truly is.