Now is not the time to sound retreat. . . 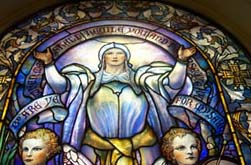 
If you have not heard these words, you must have been living under a rock somewhere.  Among all the sources on the internet and in print, even the good Cardinal was forced to correct the record and state clearly both what he said and what he intended.  I bring it up here only because it is the kind of language that forces us to see the dramatic changes that have taken place all around us.  When I grew up (less than a generation after the Cardinal) it was common to see nuns in habits and priests in cassocks.  It was not unusual even for a Lutheran like me growing up in a small town without a Roman Catholic parish.  We saw rosaries and heard angelus bells all the time.  Whether or not we were Roman Catholic, these sights and sounds signaled the familiar, welcome, and comforting presence of the faith in the public square as well as in the privacy of church and home.  It seemed, at least for a time, that our culture also welcomed these images of Christian faith.  But the world of old where church bells did not violate noise ordinances and where the presence of clergy in religious dress was not viewed with suspicion or contempt is long gone.  The purpose of this column is not to condemn the secularization of our world and our daily lives but to challenge us to see the role and purpose of the church within the increasingly hostile atmosphere of culture and society.

What I recalled most about the good Cardinal's words were not the descriptive images of religion that has become embarrassment, offense, or threat to culture and  society.  What I resonate with is the part of his quote that is so often forgotten.  The Church will still be there.  The shards of a ruined society and broken civilization are the awful signs of decay but they are also the fodder for God's hope to be replanted and rebuilt among us.  We cannot afford simply to lament the changes in our culture and the way the Christian religion has become a pariah on the contemporary stage of life, work, and leisure.  We must move beyond the predictable lament and proceed to plant hope where despair reigns, to shine Christ's light in the darkness, and to speak with confidence of Him who is the resurrection and the life.

All churches (except, of course, those who have chosen to mirror back to the society its own expectations, values, and voices) are facing the threat of persecution, of being marginalized away from the microphone and stage of modern life, and of the threat of being silenced.  All churches (except those who cave in) will have to come to terms with this threat either by hiding away and providing a refuge for others who want to meet behind closed, locked doors... OR by courageously standing firm as the Church has done in the past and boldly speaking the Gospel to a world unfriendly to it.  Perhaps growing up in the 1950s I did not know the meaning of Jesus' words from the Sermon on the Mount "blessed are you when men revile you and persecute you on my account" -- but I have learned them.

The great temptation is to see the 1950s and the seeming rapprochement of church and culture and society as the norm.  It never was.  It was a brief moment which was more an illusion than a reality.  Now we are under no illusions and we face the reality of living through a time when Jesus' words will be felt in the slap of the world across the face of the faithful.  The temptation may be to turn inward and to hide Christ's Light from the world but we dare not.  We must speak the "no" when it must be said but we must also speak the "yes" of Christ crucified along with that "no".  We dare not silence our dissent from the culture of death, of self-centered life, and of pleasure pursued with abandon.  But we must also speak as passionately of Jesus Christ the Son of God, coming in flesh as our Savior, and of the gifts and graces He has bestowed upon all who will hear His call and, by the grace of the Holy Spirit, believe.

It is too easy to closed the doors, lock them behind us, and shiver in fear for our selves, our children, and our grandchildren.  Yet we are not a people captive to fear.  We stand, if we stand at all, in Christ who has vanquished all fear.  May the grace of our Lord Jesus Christ make us bold to be faithful under duress, to endure despite hardship, and to speak in the face of threat... for the day is coming when the world will despair of its ruins and in that kairos, in that pregnant moment of opportunity, the name of Christ will openly gather the remnant and rebuild broken and restore the lost -- just as He continue to do in a more hidden manner when it seems we are always on the defensive.

We all know the first part of the good Cardinal's words.  Let us not forget the second part.
Posted by Pastor Peters at 6:00 AM

The second part is interesting. It helps bring into perspective the broken world we are living in. It also gives hope for those unsatisified with the changes in America as well.

Amen. Thank you. Things I've been pondering to myself for awhile, the Church's role in our increasingly hostile society.