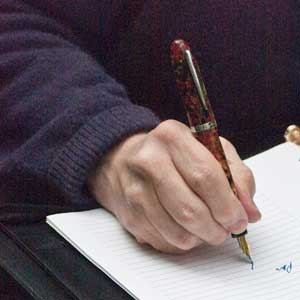 I do not often repost an entire column from another source.  This is one I think worth passing on.  The sad truth is that electronic media have become not only a staple of the classroom, but, some would argue, a necessity.  Balderdash.  They are not an improvement upon the old fashioned form of written notes and faces pointed in the direction of the professor.  By extension I would apply this same point of view to those who think screens, smart media, social media, etc... are the saviors of a church that seeks to reach people via Sunday morning.  I know of little benefit from the people head down and attentive to a screen and I know of little benefit from the pastor leading from it or using them on the wall.  The technology is marvelous, to be sure, but its application must be judicious and it does not work nor belong in worship (or the classroom, as this professor suggests).  Well, there I go. . . showing my age and curmudgeonliness again.

Read on. . .  by Mark Bauerlein writing in First Things:


I disallow laptops in my classroom. No screens, only books, paper, and pencil. The obvious reason is the distraction factor. Stand in the back of a classroom of fifty-plus students, survey the dozens of screens propped open, and count how many show social media, pictures, text messages . . .

That’s one reason why, when I announce the laptop ban on the first day of class, several students nod in relief. They find nothing more annoying than having their eyes drawn to the screens of the mates in front or beside them. If a movie is playing, they can’t help but glimpse the action and lose track of class content.
Here is a study that uncovers a deeper problem with laptop use. (The link is contained in the news story, but you’ll have to use your academic password to get access to the full report in Psychological Science, June 2014.) Even when students pay attention and take notes on the keyboard, their learning suffers. Or rather, they understand and retain the material less effectively than they do when they take notes by hand.


In the study, longhand and laptop note-takers performed equally well on factual-recall questions, but on “conceptual-application” questions, “laptop participants performed significantly worse than longhand participants.” This was true in spite of the fact that laptop note-takers composed many more words than longhanders did (though, within each group added volume correlated with higher scores).

The difference comes down to “the manner and quality of note-taking,” the researchers state. Typing quickly on a keyboard involves “shallower processing” than writing by hand. Handwriting is slower and more laborious than typing, and so a student has to be more selective about what to record. Because the speed of longhand is lower than the speed of presentation, the student also must condense and summarize, thereby initiating a process of comprehension in the very act of taking notes. In fact, the closer a student came to a verbatim rendition of the teacher’s presentation, the lower he scored on the test.


This is further evidence in favor of the old way of doing things, and so I encourage the teachers reading this to adopt the “no-screen” pedagogy. Yes, it’s counter-cultural, and some of the students will resent it because it means more work. But a little more pain will bring them more gain at exam time.

I have a blind (legally) friend. One of the often heard arguments for big screens is that the visually impaired are helped to sing the hymns. She has to hold anything she reads within 3 inches of her 'good' eye. Her complaint was never being unable to read (she couldn't read the big screen either). Her complaint was that the hymnal was in front of her mouth, and her singing (has a beautiful voice) just bounced back into her face.

More importantly, she contends that hearing is much more important to learning than sight or reading. This was the case in the early church. Books were astronomically expensive, and many could not read. Even those who could had a memory trained to retain what was heard.

On the subject of 'manual' note taking, I wonder if the eye-hand coordination required for writing connects with the learning centers of the brain differently than typing? Grant writers, get busy.

Another thought: If we have things such as the Divine Service/Liturgy memorized, it frees our minds to concentrate upon the words in a way impossible as we must to read and process them.

My hand written notes were illegible. To write fast enough to even summarize what the teacher was saying, my cursive was impossible to read. So I had neither a typed transcript nor legible handwritten summaries.

I've been told that there are school districts that do not teach how to write cursive. If that is true, those students will not be able to take longhand notes. That's a shame.

All the contents you mentioned in post is too good and can be very useful. I will keep it in mind, thanks for sharing the information keep updating, looking forward for more posts. Thanks
Laptops South Africa