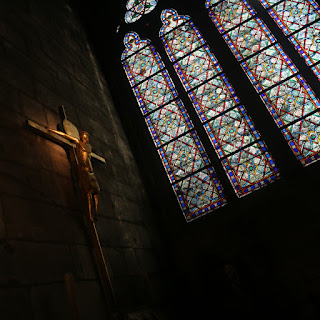 All around us are the signs of decay in a society and culture that has increasingly made God and the Church an unwelcome guest.  All around us we find the rejection of Biblical truth and morality in favor of an individual truth and a morality defined by one person in one moment.  All around us are the conflicts of a world that will seemingly surrender everything it once held sacred in order to pursue a virus free safe life and then insists upon viewing the child in the womb as trash or treasure depending upon your perspective.  And the churches have attempted to carve out a path for themselves in varying ways.

Rome seems to make accommodation to power in order to preserve an imperial church.  Protestantism, especially the mainline version, seems to have replaced divine revelation with the will of the populace and with the presumption that Scripture is only true where reason can judge it so.  Evangelicalism has found a home in the pursuit of a pleasurable faith that will help one succeed in achieving the goals of happiness each person sets for themselves.  Some churches maintain a liturgical identity but have gutted the words of the liturgy and creed of any real meaning -- preferring a form that looks good but apparently means little.

And some churches find themselves divided over what to do -- some Methodists trying to slow the drift into meaninglessness with a schism and some Lutherans trying to maintain a theoretical faith that allows such diversity of actual practice that no one is really sure what a Lutheran is on Sunday morning.  It is this last crowd in which I find myself -- complete with a theological term to provide cover for doing what you please in worship:  adiaphora.

It might be enough to drive us to despair and to reject it all.  If we were only looking at the human part of the equation, that would surely be so.  It could cause the most faithful to give up on faithfulness since it so often does not seem to be rewarded by the success we envy so on the part of those who are, well, less than faithful.  But the Church is in the hands of God as well as in the hands of men.  Men can corrupt, screw up, distort, reject, rent asunder, and re-invent the Church at will and have over the centuries but every time it seems the darkest hour has come, Christ has shown His light.  Reformers or reforming movements have recalled us to grace, to the Gospel that does not pass away, and to the Word of the Lord that is the ground of our being.

As we begin a New Year (a year begun in the Name of Jesus and with the shedding of His first blood), it is important to remember that distinction.  The death that we would inflict upon Christ's body the Church is because we are men, sinful men, but the life that raises the Church from the death we would heap upon her is because the Church has God's promise upon her.  The gates of hell will not prevail, the minions of Satan will not defeat her, and the sinful thoughts, words, and deeds of men will not prevail.