The Intolerance of the Tolerant 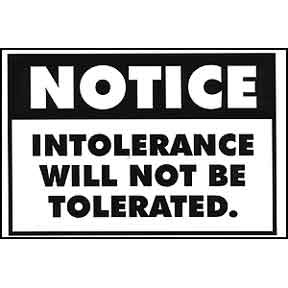 I did not make up this title -- I wish I  had but I stole it from another.  It is a powerful contradiction that we see evident among those who would constitute the more liberal bent of just about anything.  These are those who would foment for diversity and a broad enough tent to allow for different thinking than the party line.  They are the ones who encourage women priests, access to abortion, and same sex marriage among all those nations and churches that discourage such things.  But it is an interesting thing about the tolerant.  They are only tolerant of what they are for and apart from what they promote they are very intolerant.

The tolerant who promote diversity and openness are, in reality, only feigning tolerance in order to press for a new intolerance that forbids disagreement.  In the end they merely substitute one set of intolerance for another and promote the same kind of rigid orthodoxy which they decry among the governmental, societal, and religious institutions around them.

It is the false premise of liberalism.  It is not liberal at all.  It is merely conservative about a different set of beliefs and values than those who oppose them.  While I speak in generalities, there are some specifics that we can address.  And while what I say may be applied in different arenas, I will direct this only to the church aspect of things...

Christians are supposed to be tolerant of other religions -- especially a religion like Islam which is so remarkably intolerant.  So, for example, we as Christians should press for the right of Muslims to enter society on every level, build mosques and Islamic centers wherever they choose, make provisions for the faithful for the five times of daily prayer, and allow for the wearing of the berka.  Never mind that this Islam we are to be so tolerant of refuses a Christian church building in most Islamic countries -- not even for the millions of Christian foreigners who live and work there.  Yet to point this out is to point out my own narrowness of thought and meanness of spirit.


Liberal Christianity promotes all sorts of practices and positions at odds with Scripture and tradition and works in nearly every way to change the stance of Christian denominations to allow for more liberal and progressive thinking.  Yet this same Christian liberalism refuses to allow those who disagree.  Liberal Christians who are so generous with a diversity of truth are opposed to Christian churches who refuse women's ordination or who would enforce doctrinal orthodoxy or who would stand for the historical and literal character of Scripture. The only truth which is to be enforced in Liberal Christianity is the uncertain truth of those who do not believe what the Word of God says, who believe that truth must be changed in each age and time to fit the prevailing mood, and who make the center of nearly everything man and his consuming quest for pleasure, happiness, equality, and justice.

In my own denomination, there are those who insist that worship need not be shaped by the faith and identity of our Confessions but can be structured differently -- as long as unity of substance is maintained and diversity of identity and practice can be allowed.  This group is intolerant of those who would press for more unanimity among the congregations when it comes to worship or more Lutheran identity in what happens on Sunday morning.  They seem tolerant of everything except that which is traditional.  The same can be said for nearly any of the hot button issues of the day -- the only view that is allowed among these folks is the view that allows their point of view.  Anything else must be challenged.

I say this because it is often hard for those who would hold to a more traditional view point since we do not want to be seen to be narrow, judgmental, and mean spirited folks.  So we often are guilted into accepting things that we know we cannot accept and into practices which challenge the very core values of our Confession.  And in doing so we generally appeal to constitution and by-law instead of arguing on the basis of Scripture and tradition.  The merits of our positions and our arguments end up getting lost when we appeal to formal documents like constitutions and by-laws.  But in doing so, we avoid being labeled by others and have our ideas and ideals stained with the terrible curse of sectarian, narrow, or judgmental.

What we need to do is to challenge this false liberalism that parades its diversity in politics, society, morality, and religion but which is not liberal at all.  It is a sham.  It is not diversity which is desired but the enforcement of the liberal ideal and ideas.  Allowing for heterodoxy or heresy is the surest way to enforce it.  Remember the so-called Neuhaus' law.  "Where orthodoxy is optional, orthodoxy will sooner or later be proscribed".  In other words, where Scripture and tradition are made merely one choice among many choices of truth, the genuine truth of Scripture and tradition will eventually be the one truth not allowed.

In the end all I want us to do is to expose the fallacy of liberalism -- it is tolerant only of those things with which it agrees.  The tolerance of the tolerant is lie that needs to be exposed.  The intolerance of the tolerant needs to be discussed so that we who hold for the truth are not guilted by our desire to be liked into positions that deny the very thing that we are for...
Posted by Pastor Peters at 6:45 AM

Thanks for putting into words what I have been thinking about. I find myself lately sometimes feeling quite frightened about what is to come. We're becoming tolerant into nothingness. You can't talk about your beliefs with people without being labeled intolerant. Yet while you may have listened to their unscriptural views, they refuse to hear you at all. I'm afraid that Christians will someday be persecuted in this country with freedom of religion written into the Bill of Rights. A couple of new members at my church recently told me of being summer hosts at a nearby state park. The woman always wears a gold cross. She was told by park personnel that wearing a cross is politically incorrect! She put it inside her shirt. I would not have done that. This stubborn German Lutheran would have politely inquired as to the status of freedom of religion in this country, and pointed out that doesn't mean freedom FROM religion. I found this very disturbing, and am afraid it's only the tip of the iceberg. I fear for our country.