Today, 30 Years Ago, This Pastor Was Installed In His First Parish 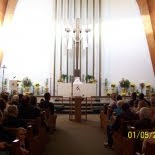 The pews were packed. Some 24 Pastors came to the installation.  A couple had to be there (the Bishop and the Circuit Counselor).  The rest told me they came to see what kind of fool it was who accepted the call to that congregation.  It was not like I had a choice -- the Church placed me there upon graduation from Seminary.  So the congregation had gone through some stuff.  It had a bit of a reputation.  But I did not know that.  Good thing, too.  Because I ended up staying there almost 13 years and found that leaving that place was one of the hardest decisions I have ever had to make in my life.  I have seldom been back but there is not a day that goes by that part of my heart is not back there in Cairo, New York, at Resurrection Lutheran Church.

We arrived in a blur, found the rectory by the moving van out front and the guys moving our stuff into this house (it was the age before email, mapquest, etc.).  The church building was not in the greatest shape.  The Pastor's Office had not been painted in many years and was a sort of band-aid pinkish color.  My wife and I found an original paint can circa 1963, stirred it up, and repainted the walls to cover up the dings.  Not great but, hey, it was better than we found it.  I guess 1963 was a good year for paint.

It was ever so hot that day we painted.  I was wearing shorts and a tee and was a mess of paint and sweat.  There was a huge desk in that office that took up 2/3 the space of the room.  We had it against the door to get to the walls behind it when there was a knock at the door.  By the time I got the desk moved and went out to the hall, I found an older woman dressed in hat, gloves, and she was growing impatient.  "I came to meet the new Pastor," she said.  I sheepishly admitted that I was he.  She did not say a word and turned and left.  As far as I know, she never came back.  I never did learn her name.  She was not interested in mine.  And so it began.


On good old St. Bart's day, the authority of the Word and Sacraments for that place was conferred upon an especially unworthy candidate.  Many of the people who were there to welcome us are now gone from this earth and have joined the heavenly congregation.  They wait for us there among the great cloud of witnesses whom God has appointed, the heavenly cheering squad just what a foolish and brash young Pastor needed to help season him for the work of the ministry.  I miss them.  Their names are written in the book of life but they are also written in my heart.  I realize now how blessed I was to know them and to serve them.  And I feel the very same way about this group of sheep whom I have been called to shepherd in Clarksville, Tennessee.  Their names are also written in the book of life but they are likewise written in my heart.


At this point in time I choose to remember the beginnings, auspicious or humble, more than to think upon endings.  Each week after the absolution, I say in blessing upon the absolved:  May He who began this good work within you bring it to completion on the day of our Lord Jesus Christ.  It is my prayer today as I look back on this one beginning.  May He bring me and all that I do in His name to completion.  A God of humble beginnings who works mighty things if only we let Him.  So today I will remember and give thanks for the chance to begin and for the God whose grace of forgiveness gives us many beginnings throughout our lives.  Soli Deo Gloria!
Posted by Pastor Peters at 7:32 AM

I say what I have said before; May you live to be 100, and be like Caleb! I'll add, I pray God does not remove you from this place.