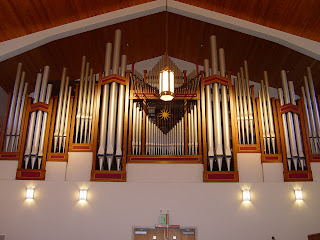 The arts group in our city put together a quick organ "crawl" featuring Grace Lutheran Church (65 rank, installed 2001), Madison Street Methodist, Trinity Episcopal, and First Presbyterian churches.  Each congregation offered its resident organist with a program of perhaps 25 minutes.  We produced a color brochure on our pipe organ but had no idea how many would come and the thing was given limited publicity (an article in the newspaper on the Saturday before and a few posters for the congregations participating).  We ended up with 150 people and most of them had never been in our facility before... Not bad publicity, it turns out.  It was also an occasion to show off what was by far the least expensive pipe organ as well as the largest in town (costing less than 25% of each of the other three).  Pretty good day, last Sunday!

More organ pics can be found HERE and the organ specs for Grace Lutheran Church can be found here (PDF format).
Posted by Pastor Peters at 6:47 AM

Heartening news. There is no experience in the world akin to hearing a fine organ (and your parish's organ is truly fine!) played well (ditto on that point as well!).

Singing hymns with pipe organ is exhilarating, especially if the organ is located in the rear, and 'pushes' the congregation along.