The Heaven of Our Best Memories 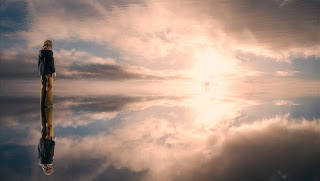 This week included sharing a moment with a couple on the anniversary of their fourth child's birth and death (one day apart).  It was shocking to me that a whole year had passed.  I knew it in my mind but not in my heart.  I expect it was the same for them -- only so much more so intense.  For one brief, fragile moment, they both had and lost this child of promise.  The very moments that were so very hurtful in that short two day life were now the most precious of their memories.  Strange how that works out -- almost like God planned it that way....

C.S. Lewis once suggested that heaven is a place where we may in fact recreate our best memories.  It is a remarkable quote.  And ever so true.  Heaven is a place in our imagination and it is reserved only for our best and warmest and most wonderful memories.  But those memories were often once hurtful and painful.  Only God can shave off their sharp edges and turn the wounds of our yesterdays into our best memories to carry into tomorrow.

As I look back on a mind filled with snippets of more than 30 years as a Pastor, in two different congregations, I find that the remarkable memories that remain were once fearful and sorrowful but have become the blessed memories that I want never to forget.  Sure, my mind is also filled with those memories that were never wounds but only joys.  And I am thankful for them.  But I am most thankful for the way God has granted me to recall what was once hurtful and to find these memories softened and remolded by His grace so that they, too, occupy the little bit of heaven I have created in my imagination.

I think of taking a wife and four young daughters in to say good bye to their dying husband and father, a man whose mother I had buried, whose father I had found dead in his home and sat vigil there for hours waiting for a rural coroner to come... I think of standing at the cemetery biting back tears as I laid to rest a woman who had become family --the last word that I blurted out was "Christ is risen" and instinctively the people responded "He is risen." and then after speaking the comfort of the resurrection, I turned away to sob at the wound of my own loss... I think of a late night phone call from an elderly parishioner whose 97 year old husband lay ill in the hospital -- "Pastor, I just heard Jesus say 'Today you shall be with me in paradise;' Fritz is gone."  I argued with her since no call had come from the hospital.  But when the hospital called they said Fritz had died at the moment in her dream when she heard Christ's words...  In life God has surrounded us with His love and care and in death we are not on our own.  So powerful are these once sorrowful and now blessed memories that they have become a part of the little heaven I carry around in my imagination.

Russ Saltzman over at First Things has written of the "Shangri-La" effect of a Pastor's first call and how, for most of us, that place occupies the most sacred space in the canopy of heaven that we carry with us.  For sure this is true of the heart, if not the mind.  But more than this, the windows to our future often are formed by God in the blank walls of our past wounds, hurts, and failures...   Ahhh, what a gift God has given us in these precious memories.  If they are but a small portion of the heavenly vision that awaits us, truly St. Paul has spoken well -- it is beyond imagination the joy and bliss that awaits us.
Posted by Pastor Peters at 8:20 AM

Hmmm... I have many painful memories. Not one of them has ever become precious to me. However, I can now see how God has used those tough times in my life to bring me closer to him and even to make me a better person. Is that part of what you are talking about?

and in boldness, add this to Lewis:

And never again revisit even the least of our fears much less the worst. HSM