Dear Pastor, Can I Come to Your Church?

You know the litany of complaints.  Lutherans are not welcoming to visitors.  Lutherans do not know how to share their faith.  Lutherans are not friendly to non-whites.  Lutherans are a closed group.  Lutherans need to learn from others how to be open and inviting to non-Lutherans.  Etc...  I have grown up with the assumption that we Lutherans were too wrapped up in doctrine and too rigid in practice to be open to new people.  I have heard too many anecdotal stories about how new people were stared at, ignored, etc... and were never coming back.  Well, it might be true of some Lutherans but it is surely not true of the LCMS.  And this is not anecdotal!  It is the surprising result of a survey.

Christianity Today reported on a nationwide field experiment to see how churches respond to emails from potential newcomers. More than 3,000 congregations received an email ostensibly from someone moving to their community and looking for a new church. We measured whether the churches replied to this email and, if so, what they said. But there was a catch: We varied the names attached to the emails ...  Surprise, surprise!  The LCMS was third from the top of best responders and the ELCA (which prides itself on being diverse and open) was third from the bottom. 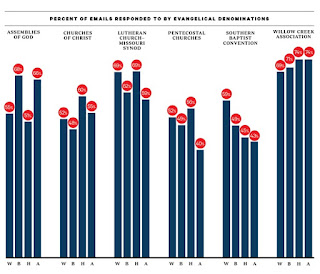 Well, I am weary of all those who beat up on the mostly lily white LCMS as being stodgy, aloof, arrogant, and unfriendly.  It turns out we are not.  In fact, another study suggested that it actually took less members of the LCMS to bring a new person into the congregation than it did for the Southern Baptists (hardly known as slothful in their evangelistic outreach!).

We love to put ourselves down or wallow in our insecurity but the truth is we are not as bad as we think we are in welcoming the stranger and being quick to acknowledge and respond to those new to our Sunday morning assembly.  Lutherans, in particular Missouri Synod Lutherans, are declining in numbers not because we are unfriendly or aloof but because we are not having babies.  It may be unfashionable to say it but either our people are past child-bearing years (yes, we are on average a bit older than some other churches) OR our fertile women are either having no or fewer children than before.  That is the primary driver of the decline of internal growth (as opposed to welcoming the stranger). We are not alone in this but it is a very significant factor in our decline (slower, though it is, than many others, including the ELCA).

Though we remain rather Caucasian in complexion, it is not because we are unfriendly to Black, Asian, and Hispanics.  In fact, we fared quite well in this one study.  That said, there is no rest for us.  We need to remain ever ready to respond positively to those who may be new to us and in search of a church home.  But the glory days of our church body clearly were the days when we were growing LCMS Lutherans the old fashioned way -- from marriage to children to baptism to catechism!  I am not saying that our problems would be solved if our folks were more fertile (my own parish is, perhaps, an anomaly to this statistic) but that we shouldn't go beating ourselves up unnecessarily.  We should lament our legitimate failings but being serious about doctrine does not mean that we are not also serious about welcoming new folks and speaking the Gospel to them!
Posted by Pastor Peters at 6:00 AM

Welcome newcomers, and enfold them into the congregation (I dislike 'assimilate,' I've seen too many Star Trek shows; P). Continue to welcome them; as we have been ever since we became Lutheran!

I'll never forget the letter I received, signed by the Pastor and Chairman of the Elders from our local LCMS parish telling me not to come back to their church. They followed up by a visit from the Pastor and the Associate Pastor, just to reinforce this, to be sure I understood that I was not welcome.

This issue was that I wear clerics on Sundays as an ordained Priest. My wife and I had been participating in an LCMS adult class, and we were well received there. We were also giving to the parish monetarily. But we were told that, because I wore clerics, it confused folks in the parish as to who the was the pastor. I was always very careful to stay in the background, to never speak authoritatively on anything, in short, to lay low. I was under orders from my bishop to always wear clerics if I visited any parish, particularly a non-Anglican parish; a bit like being in your own uniform when visiting an allied camp. But they could not stand my black shirt! I was forbidden to come on their property if I had on a black shirt. (When the two pastors came to my house, they were wearing white shirt and neck tie. I thought that rather odd for someone, in the pastoral ministry, on church business!)

All very welcoming! I have not been back, nor will I.

"Christianity Today reported on a nationwide field experiment to see how churches respond to emails from potential newcomers."

This article is all about trying to measure racial and ethnic biases of U.S. churches.

The link to the CT article is to a limited view site with no details presented. Here is the link to the complete article, http://www.christianitytoday.com/ct/2015/july-august/dear-pastor-can-i-come-to-your-church.html?share=GcNwk5OSRqtys5K83ZLtGwRj%20TEqp5hL

The "field experiment" was done by Bradley Wright, an associate professor of sociology at the University of Connecticut with another sociological researcher, Mike Wallace.

"Our letter asked about the size of the church and service times, and requested additional information that might be helpful. But if we had just this letter and nothing else, we wouldn’t have a study of race."

"We had decided on using four different racial and ethnic groups: African Americans, Hispanics, Asian Americans, and whites. So we needed names that people stereotypically associate with these racial groups. We studied US Census data and talked to people from each ethnic group, and we ended up with eight names:

Twelve different church bodies or organizations were selected. Out of those twelve, the churches comes from 65 randomly selected out of 436 congressional districts. While the districts have approximately the same number of people (around 700,000) the districts do vary significantly in land area from 570,000 square miles to 10 square miles.

"After this time-consuming process [The details of which were NOT discussed!], we had the names and email addresses of 3,120 randomly selected churches"

"This meant that we had to send 3,120 emails. We recruited six undergraduate students whom we knew to be careful, thoughtful workers. We offered them the opportunity to learn about social research and to aid a groundbreaking study. When that didn’t work, we told them that we’d buy them pizza."

Perhaps there will be more experimental, statistical, and demographic details in the article the authors will be publishing in the June 2015 issue of Journal for the Scientific Study of Religion (which is still not published due to the death this spring of both parents of the Editor-in-Chief).

Without those details available the "field experiment" is just another one of the "anecdotal stories" that will no doubt find its way into countless sermons.

With 3,120 emails to 12 church bodies in 65 congressional districts, that gives averages of:

Presumably each of the four emails per church body per district were from one of the four racial/ethnic name groups (the "field experiment" article doesn't provide the information).

Curiously, Bradley Wright's "field experiment" did not use a couple of obvious names trying to measure racial and ethnic biases of U.S. churches:

Also, curiously, the names Wright used were male names and not the names of any females. Perhaps the to-be-published research paper will provide explanations for these omissions.

Separate from the questions raised about Wright's paper, the blog title, "Dear Pastor, Can I Come to Your Church?," raises another question in these times:

Does your church have a prepared security plan and trained people to implement it for a disruption, including a violent one, of a church service by radical groups?

No need to detail the plan, although it should be more than "Call 911."

I am looking to get back into the Lutheran Church, I was as a child, and now that I am grown and have a family of my own I would like to get back to that faith. Post like these bring up a good point, I want to feel welcome, who doesn't? I have been reading Where God is Present by John Warwick Montgomery, his book is about getting back into the church and coming back! It's been motivating for me, wherechristispresent.com is the book site.

A few months ago, I decided to start attending church again. I prefer smaller churches, and found a Lutheran Church in my neighborhood. It was one of the lonliest experiences of my life. I went there for three weeks. Nobody introduced themselves or even talked to me. On my last Sunday, I noticed a family toward the front of the church just starring at me. They did not seem happy at my presence. Although I trust this study, my experience tells me that I will never go back to a Lutheran church.