A Small But Significant Thing. . . 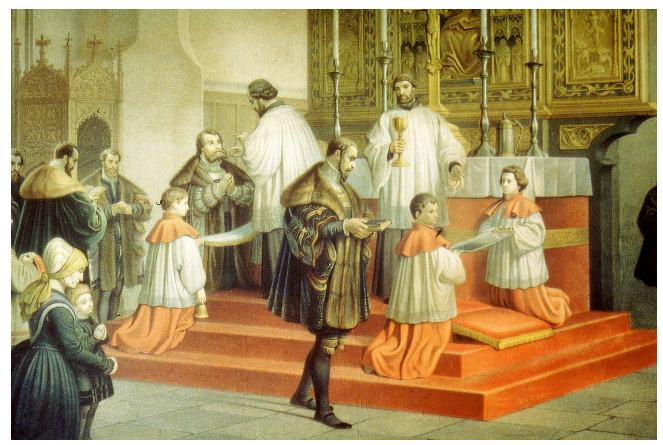 Little things often have great significance.  We daily meet the big things of life in the small things that have importance beyond their size and shape.  Consider the small band worn on a ring finger or a child's scribbles hanging on the fridge or a door held open or a single finger wave (you have to have grown up in Nebraska to understand that and NO not that finger).

The same is also true of the things of God and the Divine Service. Small things -- ceremony, ritual, and church usages -- these all hold significance greater than their size or weight.  A head bowed, a crucifix, hands folded, a knee bent -- these are small things to be sure but they have great symbolic value and bespeak a profound and eternal truth.  Hidden in these small things are great truths.

It was -- it is -- a small but highly significant thing, the houseling cloth or chin paten. Though you never see it among Lutherans anymore, it is not as if it is not needed.  With so many receiving in the hand, dropping the host is more common than I would care to admit.  In days gone by this was a small but important thing -- reverence for the host, the body of Christ.  It was a small way that testified to the real, true, and substantial presence of Christ in the Holy Sacrament -- even in the smallest crumb of the host!  It was also a profound example of the devotion that the faithful held about that blessed communion upon the flesh and blood of Christ and their desire to honor the Lord not only with the devotion of the heart but the outward piety of faith.

I am sad that today such things have become an occasion of controversy.  A Lutheran who would offer a hand paten or houseling cloth would very likely be scorned as a Romanist.  Even in Rome there are those who turn up their noses at these vestiges of a long forgotten piety.  We no longer think like that -- we are neither medieval nor are we superstitious.  Such is the way we would cast aside the pious and careful acts of the faithful -- Lutheran as well as Roman Catholic.  In other cases it would be dismissed as no longer needed -- as if the most important quality of the Divine Service were utilitarianism!  Ah, it is sad, indeed, that we are so smug about the devotion of those who went before us.

But it is about more than this.  I am not so sure that we are nearly as convinced as they were of the vibrant and profound presence of Christ in that host and cup.  We have drunk freely of the spiritual but not religious koolaid and we are too sophisticated to be caught up in fears of defiling or simply treating casually the things of God.

Luther was not a modernist.  He did not think like we tend to think today.  The story is told of the mature Luther, 58, who was serving at the altar in Wittenberg, 1542. . .

... a woman wanted to go to the Lord’s Supper, and then as she was about to kneel on the bench before the altar and drink, she made a misstep and jostled the chalice of the Lord violently with her mouth, so that some of the Blood of Christ was spilled from it onto her lined jacket and coat and onto the rail of the bench on which she was kneeling. So then when the reverend Doctor Luther, who was standing at a bench opposite, saw this, he quickly ran to the altar (as did also the reverend Doctor Bugenhagen), and together with the curate, with all reverence licked up [the Blood of Christ from the rail] and helped wipe off this spilled Blood of Christ from the woman’s coat, and so on, as well as they could. And Doctor Luther took this catastrophe so seriously that he groaned over it and said, “O, God, help!” and his eyes were full of water. (Johann Hachenburg, quoted in Edward Frederick Peters, The Origin and Meaning of the Axiom: “Nothing Has the Character of a Sacrament Outside of the Use” [Fort Wayne, Indiana: Concordia Theological Seminary Press, 1993], p. 191)

Luther did not have to but his faith compelled him.  So that altar boys of old holding the houseling cloth or the hand paten.  But if we do not do it today, is it because we think it no longer needed or because we no longer believe the Real Presence so strongly.  I hope and pray it is the former but I fear the very presence of Christ in the Sacrament has eluded us and we have moved, as we like to think, beyond such simplistic thinking.  I wish it were not so but I fear it is.

The revival of the faith happens not simply with the big things but in the small things that seem of no real importance and yet in them we demonstrate what we really do believe. . .

The pious faithful reverently trust the Lord God for His mercy in cases of inadvertent slips. The heart is in the right place but the Host may not be, by no intentional fault of the celebrant or the communicant.

Most of the pictures I've seen of these beautifully imagined Old Lutheran practices are from the 19th Century when the Union Church had won the day. By CFW Walther's day, 1811 to 1839 in Germany, no one alive could remember seeing these practices. The death of JS Bach in 1750 is an excellent date for the end of Old Lutheranism in practice. The question among orthodox Lutherans about the sacrament is not what but when. When is it the body and the blood. When we set aside bread and wine for a holy purpose, isn't that the definition of making a thing holy? And after the sacrament is over, and the bread and wine that was set aside, consecrated, and now unused, is it still holy? Should it still be set aside and treated as holy until a reverent manner of use is determined and practiced? It is possible that Luther and Bugenhagen lapped up the spilled wine because it was still holy though it may not have still been carrying the blood. People differ so on this issue, I hesitate to offer my pitiful idea. In any case, the set aside but unused bread and wine that once carried the body and blood of Christ should never be treated as trash if for the visuals of it alone.

"The question among orthodox Lutherans about the sacrament is not what but when. When is it the body and the blood. When we set aside bread and wine for a holy purpose, isn't that the definition of making a thing holy? And after the sacrament is over, and the bread and wine that was set aside, consecrated, and now unused, is it still holy? Should it still be set aside and treated as holy until a reverent manner of use is determined and practiced? It is possible that Luther and Bugenhagen lapped up the spilled wine because it was still holy though it may not have still been carrying the blood."

These questions are all treated at great length in the book by the late Pastor Peters, which is quoted in this posting by the living Pastor Peters. I read the book (or, rather, the two-volume doctoral dissertation of which the book is the published version) with great interest and edification nearly twenty years ago.

Edward F. Peters, Luther and the Principle that Apart from the Use there Is No Sacrament. It is available from the Seminary library at St. Louis or Ft. Wayne (it was once available in Sem printshop version from the Ft. Wayne bookstore).

In the Orthodox Church, the houseling cloth is still used today, although we don't call it that. It is usually referred to as the Communion Cloth and is held under the chin of each communicant by two altar boys (one on each side of the cloth) and then after the person communes, his lips are also wiped with the cloth to catch any possible droplets of the precious blood of Christ that might remain there.

I have also witnessed Orthodox priests and deacons get down on the floor and lick up the spilled blood of Christ when accidents occur, in much the same manner as Martin Luther did historically. No one forces them to do this. It simply occurs spontaneously as a result of our faith and piety. To us it is quite natural.

Who would have ever thought it would become controversial and "Romanist" for American Lutherans to actually follow Luther's own practice when Eucharistic accidents occur?

Truly the Lutherans in America have made their bed with the Protestants. How sad indeed.