In love with dissidents. . . 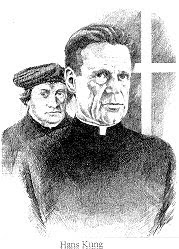 There is much truth to the idea that the media has never met a dissident it did not like -- except, perhaps, one whose resistance is rooted in tradition!  Even the dissidents we do not understand, we seem to love as media sensations.  Some presume that this is what Luther was.  I would suggest that they do not know Luther.  Luther was not above using the license of drama or the technology of the day but, as the Augustana reminds, the goal was not to be out of step with the Church but to restore the errors of the moment to the catholic and apostolic faith.  If it ain't catholic, we shouldn't ought be believin' it or doin' it.

That said, there are curious figures who, over the years, have either propelled themselves of been shot into the limelight with little more than heresy to fuel their dissidence.  One of those such figures has to be Father Hans Küng, the Swiss theologian, who just happened to have died at age 93 on April 6 of this year.  I guess I figured others would comment upon his life, his legacy, and his left leaning political and theological ideology.  They have.  I do not need to go where they have gone.  So it will suffice to say that Küng's legacy is largely based upon his opposition to the basic teachings of his own church body.  Oddly enough, he taught an Introduction to Christianity course that began his odyssey into fame -- all the while admitting that he neither believed true nor would teach as truth what Roman Catholicism insisted was true.  It should have come as a surprise to no one when his license to teach as a Roman Catholic theologian was removed.

The world is filled with theologians popular and academic who know better than God what Christianity was, is, or ought to be.  There is no shortage of naysayers to what God has said and there are more critics of Scripture and its teaching than sand on the shore or stars in the sky.  There is no limit to those who view tradition with suspicion even though legitimate tradition represents the faith of the faithful that did not die with them.  We as people love the dissident but the dissident does us little good.  Oh, to be sure, they have noble intention.  They insist that their goal is to question so that clarity and understanding may prevail but in most cases all they end up doing is question by attack and weaken what they claim to preserve.

When Luther is looked at through the lens of Protestantism he becomes just another hack who thinks he got it right where everyone else before him got it wrong.  God knows Luther could have benefited from an editor who knew when excess was not helpful to the cause.  Luther himself admitted to having a knack for the memorable characterization.  But at its root, Lutheranism is not dissident theology.  It is patristic and lauds tradition that was planted before medieval times.  Lutheranism does not hate the Church but loves her.  Lutheranism does not disdain reason but insists that reason not sit in judgment over God and His Word.  Lutheranism loves the mystery, the paradox, and the seeming contradiction -- presuming the fault lies not with God or His Word but with our feeble understanding of Him and Scripture.  Lutheranism does not impose laws but neither does it license people to do what they please when they please (the sin of adiaphora taken for what it is not).  Lutheranism is not dissident but is intent upon what is catholic in doctrine and catholic in practice -- if not compelled at least urged along with the honest shock of why one would reject it.

Hans Küng was not a new Luther and Luther was not a forerunner of Hans Küng.  Of the many things I tire about, the perception of Luther as a dissident and that all the problems of Rome born of Protestantism are two at the top of the list.  When Romans screw up, they have not become Lutheran.  Some of them, however, may not have been Roman Catholic.  Surely there is a part of Hans Küng who might fit that bill.  I do sit in wonder, however, how a dissident like Küng would work so hard to remain in communion with the leaders and dogmas he rejected.  Perhaps in this way Roman Catholic dissidents are different from Lutheran versions who seem rather to enjoy hating the church they claim to love.