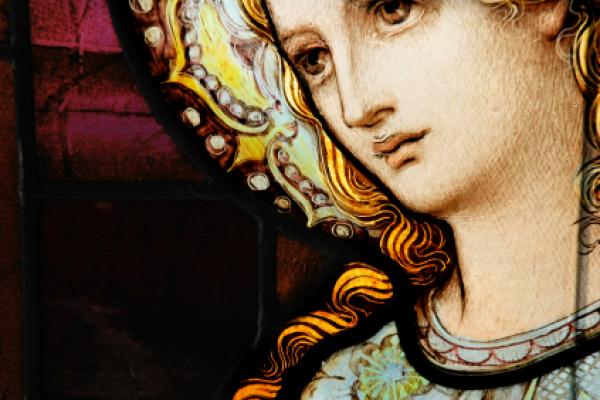 For Catholics, Mary is like the moon, for her light is always a reflected light. Whatever we say about Mary is meant to draw attention, not so much to her, but to Christ. Thus, for example, the claim that Mary is the mother of God is an indirect way of affirming the facticity of the Incarnation. Our feast for today--the Assumption of the Virgin--is similarly Christological in focus. It is meant to highlight the reality of Jesus' bodily resurrection from the dead. As the first and greatest disciple of the Lord, the Virgin Mary shares in the effects of this event, participating body and soul in the new life opened up by Jesus.

These words from Fr. Barron in an Assumption Day sermon resonate well with Luther and his own high view of the Blessed Virgin.  He does not suggest that we cannot or should not look at Christ but he does carefully point out that Christ's reflected light is the glory of the Virgin Mary and all the saints.  It is in this vein that the Lutheran Confessions commend the saints to us.  Charles Porterfield Krauth notes that the doctrinal sections of the AC begin with God and end with the saints -- a most appropriate perspective.  The Confessions call upon Christians to honor the saints by telling their stories (the history of the saints) so that we may follow the example of their faith and of their good works, as appropriate to our baptismal calling.  the joy of the saints' company is not that they invite us to focus on them. Rather, the very mark of the saints is that they invite us to focus with them upon the Lamb who redeemed them with His own blood, sanctified them in the waters of Baptism, and made them shining witnesses to the glory of His resurrection. They are not dead. They live in Him. Their spirits join us (and we them) in the Divine Liturgy (Hebrews 12!) and we sing a united song with angels, archangels, and with all the company of heaven. "Holy, holy, holy!"  (Borrowing a few words from good friend Pr Will Weedon here.)

Before we begin a polemic against the transformation of Mary's Dormition (falling asleep day) into her Assumption, I am pleasantly surprised by the nuanced words of Fr. Zuhlsdorf:  Although Ven. Pius XII also refers to Mary’s death in the document whereby he declared infallibly the dogma of the Assumption, and Bl. John Paul II advert’s to Mary’s death – as do some saintly writers – we do not know by a definitive or infallible teaching beyond a shadow of a doubt whether Mary died and was assumed body and soul into heaven at that moment or if she was assumed without dying.  We know with our Catholic faith, and by infallible authority, that at the end of her earthly life, the Mother of God was assumed into heaven and no stain of corruption touched her, in life or death.  For a long time I had, apparently wrongly, assumed that the Assumption was the replacement for her death, a prevention of that falling asleep to join the ranks of Enoch and Elijah.  I would suggest, however the tension between the honors Rome has accorded to her and the words of Fr. Barron that began this little piece -- words that suggest the light is not in Mary but reflected from Christ who is the Light.

Whatever, I think we Lutherans are wrongly suspicious of Mary and the saints.  I would hope that on this day we can echo the thought of Luther and of Fr. Barron and honor her as first Christian, first disciple, and one who shown with borrowed light.

But it's all a myth.

But it's all a myth.

I must say I like this better than the "Mary never died" theory, and it's more compatible with the Lutheran understanding of the dormition of Mary. It also is in accord with church tradition, which interestingly never produced relics of Mary. That said, the entire event still is just complete conjecture. But this is an interesting way of looking at it.

Back to Scripture, Lutherans:

"Blessed are you among women..." (not because she was blessed in herself, but blessed because God was gracious to one more sinner).

"All generations will call me blessed..."

Remember the moon is DEAD. It cannot summon up any light or life of it's own. Therefore, Mary did die as do we. A blessed death no matter what it's manner, whether tradition is correct or no. She was her Lord's child as well as his mother.

I'm a former Baptist, brought up to despise saint worship. The Lutheran way is not worship, but honor. Honor does not need every fact about the person honored. It honors not because of life springing from its object, but in a sort of 'holy envy.'

This is a ramble, but I will honor my Lord's mother because she allowed Grace to be showered on her. May I do likewise...