A Great Communicator Is Not the Same as a Great Preacher 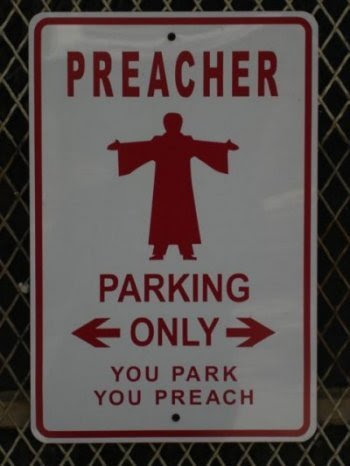 I had a conversation the other day about preaching. The person with whom I was speaking had never spent a minute in a pulpit but had some very interesting things to say from his vantage point in the pew. It has had me thinking.

It was not a long or detailed conversation but I have thought about it over and over again. It was this man's opinion that too many preachers aspire to be great communicators and what they need to be are pastoral preachers. He particularly complained about the story, Bible passage, point; story, Bible passage, point sermons that use Scripture as footnotes to their arguments instead of preaching the Word of God. He also said that it is okay to laugh in church but the function of the sermon is not to make me laugh -- or to send me home with a smile on my face. In fact he said that the best sermon he ever heard left him sitting in the pew long after the people had gone -- convicted and cleansed and left with the awe of the Spirit who knew him and spoke to him through that sermon in a way that was at the same time scary and comforting.


I was in my first parish about 13 years. My best sermons there was at the end of those 13 years -- not because I was new to the Pastoral Ministry but because in the beginning I did not know much about the folks sitting out there. By the end of my time there, they came to my mind before I began to put pen to the page. [An aside -- I write out on paper in long hand with fountain pen all the first drafts of my sermons from exegetical notes and other scribbles that begin this sermon prep about 3-4 months before it ends up being preached... at some point I transfer this to the computer and then work it over on the screen until Thursday morning when I print it out in full and take the manuscript with me into the pulpit... not to read but as an anchor to keep me from roaming and droning on...]

I have been in this parish about 17 years and my sermons have much improved for the same reason -- I have a much better sense of the people to whom I am proclaiming God's Word. I credit the improvement to many factors but chief among them is that the people whose faces I see on Sunday morning are known to me and their lives and their troubles and their trials...

And one more thing... to all of those who believe I am speaking of you or to you on Sunday morning, a wise Pastor once told me to preach to yourself first and you will find plenty of hearers who need and want to hear it for them as well. Could it be that the preacher's most effective sermons are those that are preached to his own weakness and pain? Someone once said or wrote that if you preach to pain, there will be plenty of hearers out there.

Great communication and great preaching can sometimes be at odds. I hope that we Pastors choose great preaching -- with its requirement to speak clearly the Law that convicts and the Gospel that gives life... with its vantage point as someone who knows the people in the pew and their pain and their lives... with its goal to speak clearly the Word of God and apply it faithfully and not to impress or inspire...

For a time I heard preachers in our church who modeled themselves after Walter A. Maier the powerful preacher of The Lutheran Hour... or later Ozzie Hoffmann the premier Lutheran Hour preacher of my life... but we cannot model our preaching after another preacher. We must learn to find our own voice.

At the end this man told me that while he enjoys every now and then when we bring in the big guns to the pulpit (Dale Meyer, Paul Maier, etc...) he loves most of all looking up and hearing his Pastor speak to him and to his congregation every Sunday morning... "Grace, mercy, and peace to you from God our Father and from our Lord and Savior Jesus Christ.... Amen."
Posted by Pastor Peters at 8:37 AM

'We must learn to find our own voice.'

And, if you preach as well as you write, I suspect you've succeeded at that very task.

Thanks for the good words.

All the more reason for pastors to 'stay put.'

How are they to know the congregation if they run at the first sign of conflict? Are they really interested in the flock if they leave when a jucier, better paying, bigger church come knocking?

Gone are the days (and this is across denominational boundaries and includes those denoms. who regularly move their ministers around) when a pastor took on a congregation as a large extended family, buried his church members, and then was buried by his successor.
This is just part of the infection damaging churches. Goes along with the business model stuff.

What if Jesus changed disciples mid-stream?

Thanks be to God for ministers who can put up with the same congregation for 17 years!

So that's why I enjoy my pastor's sermons so much! He's only been with us a little over a year, but he is good. I've sat there almost in tears at times. I'll take my pastor preaching the gospel any Sunday over the Joel Osteens of this world, "preaching" what people want to hear, not what they need to hear.

Thanks for this reminder!

I thought preaching was a subset of communication. In other words, not all communicators are preachers but all preachers better know how to communicate.