The Center of the Church's and Each Christian's Life 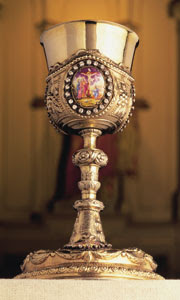 The center of the Church's life is the Eucharist.  The center of each Christian's life is the Eucharist.  For a long time Lutherans forgot this.  It was not that they should not have known this -- the Confessions of the Evangelical Lutheran Church are explicitly and implicitly Eucharistic.  The Mass or Divine Service was and is understood to be THE ordinary worship of the Church (both on the Lord's Day, in the sanctoral calendar, and each day when their are Christians who desire to receive the Lord's body and blood, or so we say in our Symbols).  The Eucharist, however, was moved to the side during centuries of assault from rationalism, pietism, and too many other "isms" inflicted upon the Church and born from with her.  What was once ordinary (in the sense or normal) became extraordinary (in the sense of exceptional) in the life of Lutheran congregations and Lutheran Christians in those congregations.

There was a hint of renewal at work already nearly 200 years ago.  Wilhelm Loehe produced an agenda and wrote with a renewed emphasis upon the Sacrament.  The Saxons who left Germany for America (to become the Missouri Synod) brought with them damask for Eucharistic vestments and chalices (not to mention THE chalice that has become identified with the Missouri Synod).  It was not merely a reaction against the Prussian Union but a desire to see a Lutheranism that flourished from the Confessions that identified this Church that moved so many to leave behind a homeland to end up in Missouri nearly halfway across the world.  It was this flowering catholic renewal that made them disdain the offers of other Lutherans to choose to worship in the Episcopal Cathedral of St. Louis until they might build their own houses of worship.

Perhaps it was this business of Stephan or the press of American religion or the fact that this catholic renewal was not yet deeply formed enough to flourish that kept this church body captive to a center other than the Eucharist for more than the first hundred years of existence.  But then again things began to renew and in the late 1950s and early 1960s the move to a more overtly and deeply rooted Eucharistic piety began to catch hold again.  Coupled with a liturgical renewal movement that caught up several denominations, groups within Missouri began to speak and act more and more like the words of their Confessions.  The Eucharist, so long an addendum onto the Divine Service, became intrinsic to that Divine Service -- not only on Sunday morning but in the hearts and lives of the people in the pews.

This renewal was often criticized for its use of externals (vestments, ceremonies, gestures, etc.) but it was never about peripherals but about the core and center of the Church's life and the life of each individual Christian.  Though this liturgical and confessional renewal resulted in more frequent communion and more attention to the what and how of the liturgy, it was caught again by new "isms" that have dogged and distracted the Lutheran Church again -- away from the center and to things foreign and alien to our confessional identity and life.  The allure of things Protestant and the incarnation of the church growth movement gave to the worship service a different raison d'etre.  Lutherans just beginning to explore their own longstanding identity and center in the Eucharist were now running after non-Lutherans who use the worship service for evangelistic and educational purposes and who structured what went on there as one might write a lesson plan or plan for an event.  Music was borrowed from others, the Eucharist was sidelined once again, and the goal was to make the outsider or visitor as comfortable as possible (and as entertained as could be within the context of something called "church").

Now as I sit here on Sunday morning, I find my work cut out for me -- not only in the sense of teaching to others who we are and where our life flows from, but also learning anew for myself and unlearning the influences of those foreign to Lutheranism.  The goal and the means to this goal are the same -- returning to the Eucharist as the center of the Church's life, this congregation's life, each Christian's life, and my own life of faith and identity as a child of God.  Baptism points me here and as long as we have some baptismal focus there is this arrow pointing us to the bread that is Christ's body and the cup that is His blood.  Our Confessions are written from and to this perspective (if only we read them so that they might speak without our presuppositions getting in the way).  Our hymnals are wonderful resources to direct us again to the Divine Service, to the Mass, where in Word and Meal Christ fulfills the promise of Emmanuel.  But it is ever a work that finished or an achievement that is reached -- always a work in progress.  We learn anew each Sunday morning that our Christian lives flow from and return to the Christ whose Eucharistic presence is both our glory and His means of grace to finish in us what Baptism has begun...  Today is one more day and one more Divine Service toward that goal.... for my Church, my congregation, my people, and myself...
Posted by Pastor Peters at 5:14 AM

From a Roman collegue... An interesting reflection for what on our calendar is Corpus Christi