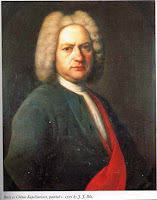 Our evening Vacation Bible School is now heading into the third day (having begun on Sunday evening with hamburgers and hot dogs before class).  The adults are in a class called BACH:  The Man, The Faith, and The Music.  We spent the first night barely finishing an historical outline of Bach's life.  Last night we spent the whole class listening to the marvelous Michael Lawrence film Bach & Friends (available from www.mlfilms.com).  It is a very current reflection on Bach's life and music (by such luminaries as Joshua Bell, Bobby McFerrin, Philip Glass, Peter Schickele, Mike Hawley, Hilary Hahn, Christoph Wolff - to name but a few).  I highly recommend it.

Tonight it is Bach the Christian, the believer, the Lutheran, the theologian, and the churchman.  We will discuss Pietism and Calvinism (the two poles between which Bach's Lutheranism was set).  We will discard the myths of a dry, dull, passionless, and heartless Lutheran orthodoxy with the evidence of a flourishing liturgical and devotional life in Bach's day.  We will look at that faith in part through the theological side of his many cantatas.

I was sent a YouTube link (might have picked it up on First Things, can't recall) about a jazz thing at which Steve Martin offered the remarkable observation (in song, of course) that athiests don't have no songs.  You can catch it HERE.  All it all it fits very well with our study of Johann Sebastian Bach.  Here is a man whose faith is reflected in his music in such depth and profundity that he is a mystical genius whose gift is almost unknowable and untouchable except in the context of the Lutheran faith in which he was raised and which he so powerfully confessed throughout his life.

Bach is often called the Fifth Evangelist - not a title he assumed to himself but the reflection of his admirers based upon the way that he told the story of the faith largely through the Passions (St. John and St. Matthew).  His music proved to be a superb canvas on which to paint the most poignant and yet Scripturally faithful pictures of Jesus in His suffering, agony, and death.  The Savior's Passion sang in the words and music of Bach (and with the cantatas) have given us a great glimpse into the man and the religion of himself, his church, and his world.  I would suggest that Bach can be appreciated but hardly known outside of this living, deep, and powerful Lutheran faith and identity.  It was the sphere in which he lived and the sphere in which he worked.

But there are no songs for atheists -- no hymns to marshal the cause or herald its truth, no chant to join the myriad of voices into one voice, and no musical expression fitting of the emptiness of a heart where no faith at all is resident.  In the movie Amadeus we heard Mozart arguing about what subjects to use for opera -- the old fogies insisted upon Greco-Roman mythology and the uplifting of virtue while Wolfgang snicked about the gossip heard at the hair dressers being more interesting.  Even in pagan religion, virtue and god go hand in hand.  Mozart was portrayed (unfairly so) as rather profane in that movie but it points to the crux of the matter.  Without God as our focus and faith to raise us up from ourselves, we are generally left with images that soon bore us, with subjects that describe our failings more than our virtues, with portraits of humanity's carnal desire, and with snapshots of our behavior that degrade us instead of ennobling us.

The music of Bach flowed from a heart of faith.  It is said that he did not so much compose it as let it out and for Bach this was the humble offering of a sinner whose glory was Christ and whose life was for God's glory alone.  No, I do not think it insignificant that athiests have no songs.  And I do not think it surprising that the songs of faith (here I would posit the great Lutheran chorales most of all) become not only our personal expression but the Church's joyful chorus of praise to God that is also witness to the world.