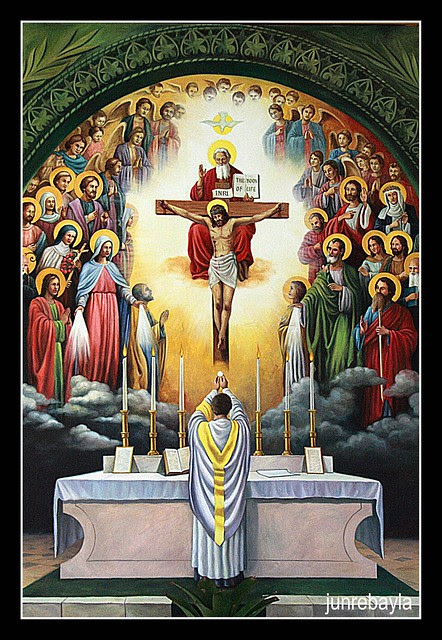 In a few hours, I will preside at the first Divine Service of the day here at Grace Lutheran Church and at one point in this first mass, I will take the bread and pray Lord, I am not worthy to receive you; but only say the word and I shall be healed and then I will commune myself on the Body of Christ and lift to my lips the Blood of Christ.  It is called the Pastor's Self Communion.  Apparently it is a practice, though ancient and Lutheran, which has some folks in a pickle.  It has also been my practice for more than 30 years.

The most recent issue of THE LUTHERAN WITNESS received this query:  We are longtime Missouri Synod Lutherans who believe in the real presence of the body and blood of our Savior Jesus Christ. However, we and other members of our congregation are offended by a practice recently introduced by our pastor. During the Communion service, he communes himself. Is this proper?


It could have been an easy question to answer.  Check with the rubrics to the Lutheran Service Book and the response would be easy.  The Pastor and those who assist him receive the body and blood of Christ first, the presiding minister communing himself and his assistants.  Then they distribute the body and blood to those who come to receive."  p. 168

Instead of indicating that the Pastor's self communion was the expected, ordinary practice of Lutherans, Dr. Jerald Joersz made it sound as if this were the odd practice, allowed, but not preferred.  According to the answer given in the WITNESS, the communion of the Pastor by a lay assistant is the preferred practice.  He cites Fritz's Pastoral Theology (1945) which suggests the better practice is communion by a lay assistant.  This book has no official standing in the Church but the rubrics of LSB certainly do.

In fact Luther is quite clear.  Luther’s rubric from the Formula Missae, 1523. He writes, “Then, while the Agnus Dei is sung, let him [the pastor] communicate, first himself and then the people.” (AE 53.29) Luther’s Deutche Messe, 1526, makes no change in this order at all.

Walther concurs:  "Walther considers the question of whether the preacher may commune himself. The consensus of Lutheran theologians is that he may not do so privately, apart from the congregation, which is the meaning of the Smalcald Articles II, 2. But he may commune himself in the public service, which was especially necessary in the nineteenth century America where many preachers were quite isolated and so would otherwise have to go without the Sacrament for a long time." (Pastoral Theology, John Drickamer translation, p. 151)

In antiquity we read from the Lituries of St. Mark, St. John Chrysostom, St. Clement, and St. James that the Pastor's self-communion was the norm.  For a detailed history and response see, the Concordia Theological Quarterly for THIS article which I will not repeat in fullness here.CTQ, 52, Nos. 2-3.

You may also be interested in the work of Phil Secker on Arthur Carl Piepkorn.  According to Article 14 of the Augsburg Confession, which states: “It is taught among us that nobody should publicly teach or preach or administer the sacraments without a regular call.” Arthur Carl Piepkorn, who taught at our St. Louis Seminary from 1951-73, pointed out that “regular call” is late medieval shorthand for the whole process of calling, choosing, and ordaining ministers. “Publicly,” he said, means “officially” or “responsibly,” not what we mean by “in public.”


At the same time, the Augsburg Confession assumes the celebrant will commune himself at a communion service at which other people are present: “the priest and others receive the sacrament for themselves” (24.34).

For an example of this, Piepkorn cited Martin Luther’s instruction in his Form of the Mass of 1523: “Let [the celebrant] administer the sacrament to himself first and then the people” (LW, AE 53.29). Piepkorn added that this was the usual practice of the Reformers, even when other clergy were present. Part 2, 2 of the Smalcald Articles, he noted, is about private masses, not self-communion.

What could have been a clear response indicating that the Pastor's self-communion was certainly the norm, questioned and challenged later in Lutheran history and especially by some today, instead became a response that implied that this was a bad idea, permissible but not preferable, and one that should be avoided precisely because people might object.  This was a muddled answer to a legitimate question and it has only muddied the water instead of clearing up the confusion.

BTW... I find it most confusing that those who find the use of lay assistants in the distribution a problem are sometimes the ones who argue most fervently for the Pastor to be communed by an elder instead of practicing self-communion.  What an oddity!!
Posted by Pastor Peters at 5:18 AM

I had been being communed by the Elders... then upon coming back from vacation I forgot that was the practice and communed myself as I communed the Elder of the Day. They like this better, so I've done self-distribution for a little over two years.

It is of no consequence to me, whether the Celebrant communes himself, or is communed by someone else. More important is, “who communes first?”

The most ancient traditions have the Celebrant communing first. In our time some Lutheran pastors feel that inasmuch as they are the chief servant of the congregation, they should be the last to commune, analogous to what our Lord said in Luke 17:7 ff, about the lord eating first and the servants afterward.

Theologically, there is no reason for the Celebrant to be communed first. I know it is a very long standing tradition. But some feel that it demonstrates true humility to commune last – Rubrics or not.

"Theologically, there is no reason for the Celebrant to be communed first."

Why assume there is no theological reason for this ancient practice? One of the theological lessons to be drawn from it is that the people get to see a picture of the Lord, Whose office the pastor holds, communing with his Church.

Besides such theological benefits to be drawn from this practice, there is also the value of good order in the Church, or what we might call churchly ettiquette. There is such a thing as churchly ettiquette, and it does not intersect at every point with worldly ettiquette. For example, in the world it is gentlemanly to let a lady walk ahead of you, while in the Church both good order and feminine modesty would traditionally result in the man of the house leading his family to the altar, and the spiritual father of the congregation (and his assistants) leading his people in the partaking of the Holy Things.

"some Lutheran pastors feel that inasmuch as they are the chief servant of the congregation, they should be the last to commune, analogous to what our Lord said in Luke 17:7 ff, about the lord eating first and the servants afterward."

Clever ideas, privately drawn from the scriptures, do not make for good liturgical precedent.

"some feel that it demonstrates true humility to commune last – Rubrics or not."

Most humble would be for the servants of the liturgy to submit to its rubrics, and serve it faithfully and humbly.

Dear Pastor Peters,
You refer to rubrics on Page 168 in the Lutheran Service Book. You must be mistaken. There is no such thing on page 168 in my LSB. I am thinking you must be referring to another book. In fact LSB in all its services only refers to the pastor and communion assistants communing first but says nothing about self communing. Please clarify your reference.

Pastor Peters is referring to the rubrics found in the Altar Book to the Lutheran Service Book.

Thank you for this! Very helpful!