Called into the fellowship of His sufferings... 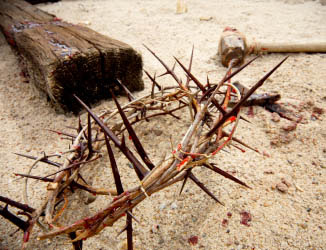 In the keeping of the various services and days of this Holy Week, we will be faced with the unmistakable face of suffering. There is no denial.  The brutality of what Jesus endured is not masked or hidden in nice words.  We can feel the snap of the whip as it scourges and tears at the flesh.  We can hear the dripping sarcasm of the mockery.  We can see the trail of blood from a crown of thorns pressed into His head.  We cannot escape the horrid sound of the hammer pounding the nails.  We want to turn away at the labored breathing that summons up strength for seven words from the cross before it is all over in a whisper.  We both are repelled and drawn to the spear that pierces the side and blood and water flow.  No, there is no way to escape the agony and pain of His sufferings.  But we do not want to...

It is not that we enjoy gore or cruelty for pleasure.  We do not.  But the realty of His suffering is a constant reminder that our redemption would not be won by being nice.  There is a part of us that wants terribly to believe that all we needed was a role model or a guide to the right path and we can fix what is wrong with us.  It is the last terrible lie of Satan and his seemingly endless litany of lies.  But the brutality of the cross and the real pain and torture of Jesus' death shatter Satan's lies and are like a cold shower of reality to knock down such fanciful illusions.  We are drawn to the cross (as one hymn puts it) because there we see the face of love, the shape of love, and the color of love -- and it all looks like Jesus nailed to the cross, bearing the full weight of its pain for us, and dying the hard death that was ours to die.

It was our suffering that drew us to God.  The Lord said of His captive and enslaved people, "I know their sufferings..."  Suffering is the language of love we learn from God.  Jesus walked among the suffering and not only heard their pain but made it His own.  In compassion He responded -- comforting, healing, and even raising the dead.  It is suffering that binds us to Him.  What is it that St. Paul says:  "For as we share abundantly in Christ's sufferings, so through Christ we share abundantly in comfort too.  If we are afflicted, it is for your comfort and salvation; and if we are comforted, it is for your comfort, which you experience when you patiently endure the same sufferings that we suffer.  Our hope for you is unshaken, for we know that as you share in our sufferings, you will also share in our comfort." 2 Cor. 1:5-7  We are called into the fellowship of His sufferings and such is the condition of knowing the power of His resurrection.  "...that I may know him and the power of his resurrection, and may share his sufferings, becoming like him in his death..." Philip. 3:10  No less than St. Peter concurs and raises the stakes by making our sharing in Christ's sufferings the privilege of the faithful:  "But rejoice insofar as you share Christ's sufferings, that you may also rejoice and be glad when his glory is revealed." 1 Peter 4:13


No, we are intimately tied to the suffering of the cross for in them we were redeemed and by them we reborn and through them we endure to the glory that is unimaginable but yet hidden for us for a little while, while sufferings must be endured.  Nevertheless, we wear these sufferings not as some mark of shame but as the means through which we are ever being remade into the people God has declared us to be in grace, as St. Paul says: "More than that, we rejoice in our sufferings, knowing that suffering produces endurance, and endurance produces character, and character produces hope, and hope does not put us to shame, because God's love has been poured into our hearts through the Holy Spirit who has been given to us." Romans 5:3-5  We are called into the fellowship of His sufferings.
Posted by Pastor Peters at 7:04 AM

There is an important distinction
to be made in suffering.

There is the suffering because we
are part of the sinful human race.
Illness, disease, cancer, etc are
because we have been contaminated
by sin and destined for death.

There is the suffering because we
are Christians. We endure insults,
ridicule, hostility when we are loyal to Christ. In some countries
people are still imprisoned and
killed because of their Christian
faith.

What does it mean that we share in Christ's suffering? Is that simply because people treat us as they treated him or is it more? I wonder...