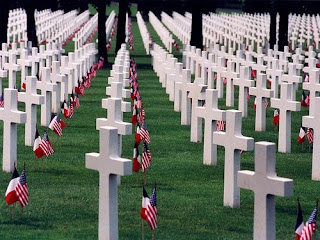 Memorial Day we remember the anonymous -- not the famous whose stories fill the pages of history in their battles and bravery.  No, today we recall those whose names and faces escape us but whose dedication, heroic effort, and valor fought and won the battles for our freedom. Hidden in trenches, slumped on beaches, laying in the tangled death of crashed plane or sunken ship, these men and women paid and still pay the ultimate price for our liberty.  No place better symbolizes what Memorial Day is all about than the Tomb(s) of the Unknown.  We honor them not because of their name but because of their sacrifice.  It is, after all, what marks the bonds of citizenship in our free land -- sacrifice for the sake of others, for the noble cause of freedom and justice, and for the future the wounded and dead will never see but have provided.

I was in my hometown this past week and looked at the memorial being erected beside the auditorium in the small downtown of a small plains village in Nebraska.  On the granite were the names of all those men and women from this little town who have served in the armed forces of our nation.  Some, like my Dad, served and lived long lives.  As I traced my finger over his name, my heart was moved.  Some, like my cousins, served in a most unpopular war and were happy just to return from the jungles of Viet Nam.  I saw their names.  Some, like the folks my children's age, served and are serving in Iraq and Afghanistan.  One was a name written on a plaque in my home church narthex and his tombstone lies in the cemetery down from that Church.  He left a young man filled with hope and he came home from Europe in a coffin, leaving to us the legacy of his hope, sealed in his blood.

I serve a congregation regularly attended by soldiers and their families.  I have watched as their families have struggled under the test of long deployments and schedules that taxed everyone's patience.  Hardly any of their stories will ever be told but in every one of them is a hero whose sacrifice has helped to build the house of freedom.  I never served and neither did most Americans but it is no less our solemn duty to honor the anonymous who did and to responsibly live out their legacy of liberty in ways that honor them and the price they paid.  We will have no future as Americans unless we remember and unless we raise up men and women whose values mirror the past defenders of our nation and our precious freedom.

As a child I carried those white wooden crosses applied to the graves of our soldiers.  I did not fully comprehend the meaning of it all then, but I saw the seriousness in my father's face and watched as hands saluted, rifles cracked, and the lonely bugle played.  It is one of our most sacred duties to pass on this awareness and this solemn appreciation and to make sure that the nation we are does not betray the lives of those who were before us...
Posted by Pastor Peters at 8:15 AM

Because all of us believe and understand in the fabric of the common bond of why we call ourselves American is to care for the men and women who wear the uniform; and when they take off the uniform, we care for them when they are veterans.
Steve Buyer