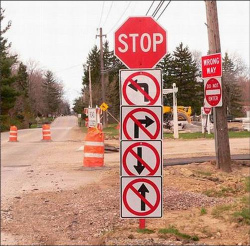 The good brother Hans Fiene has a good piece on thanking Lutheran mothers for...   I was struck by one woman who thanked her Lutheran mother for teaching her to sit still in church, even though it was difficult and she was not sure her daughter was getting anything out of the service.  In the highest form of praise, she was now teaching her own children to sit still in church, even though it is difficult and she is not sure her children are getting anything out of it... Considering the many trips my own mom took to take me out into the cry room (to make me cry) -- all to teach me to sit still in church, my heart was warmed by her words.

Frankly, I wish that there were more who taught their children (and not a few adults) to sit still in church.  I watch every Sunday as a couple of families struggle with this.  One is a grandmother bringing her grandson to church and in the beginning it was clearly a struggle but, guess what, he has gotten better.  Another is a family with three children very close in age with the ability (as all children have) to incite turmoil among the others.  Yet they sit up front on most Sundays and "teach their daughters to sit still in church."  But while I am warmed by and greatly appreciate their efforts (and many others I have not mentioned here), I am saddened by the parents who have allowed their kids to get up and leave for any reason what so ever.  They run to the drinking fountain at the first hint of thirst and then run to the toilet just to see if maybe they might have to go.  They wander the halls to and from the above mentioned destinations and then wander a bit more on their way back.  I especially like it when they clippity clop their shoes hard on the floor and then allow the doors to slam behind them.  But, who can blame them?  It is what they see in the adults around them.

Unless we as a population have grown entirely decrepit over the years and the people who went before us were supermen and superwomen, we have succumbed to the idea that every feeling, desire, or thought has to be acted upon.  So God forbid that we should thirst for a drink.  Sneak a bottle of water into the sanctuary or a cup of Starbucks (why are there no cup holders in those pews?????).  Run to the drinking fountain not once but a dozen times when the whim of thirst passes by.  Lord knows, that bladder size has surely shrunk over the years because some of us have to go a dozen times in the hour and fifteen minutes that the liturgy lasts -- and go we must whether the Word of the Lord is being read or prayer being prayed or sermon being preached (not discreetly during a hymn or the offering but when it is all quiet and getting up out of the pew is the most obvious thing you can do).

Sitting still in church is not the issue -- denying yourself for 75-80 minutes so that the focus may be upon the Word and Table of the Lord and the gracious gifts He has made accessible to us there.  It is not the sitting still but the discipline that says a moment of my discomfort or inconvenience is not important because Christ is here in our midst offering to me and all the faithful the Kingdom and all its blessings through the means of grace.  I am no Nazi looking for kick step uniformity.  What I am looking for is the devotion that looks beyond self and the whims and feelings and wants of the moment in order to focus your heart, mind, and body upon Christ.  This is what my mom taught me about sitting still in church.  [And, by the way, the same goes for concerts and other venues when you are less important than what is going on before you.]

Judging from the comments at the recent Seminary placement services in St. Louis, from the incessant need for some Pastors to ad lib through the entire service (traditional or contemporary), and the preoccupation with dramatic movement in which those same Pastors roam about like a fake lion seeking to devour their hearers with their wit, intelligence, and coolness, well, the same sitting still problem that affects the pews also affects the sedelia.

I was moved the woman who thanked her mom for teaching her to sit still (despite concerns about how hard it is to teach children and the lingering fear that they aren't getting anything out of the service anyway).  It is one of the deepest and most profound lessons I learned from my mom.  What is going on around you is often more important than you are (or your wants, desires, feelings, and discomfort).  I recall my old friend Joel Kuznik telling me about a summer spent in Europe.  He was sitting in Notre Dame or Chartes at an organ recital and a woman down the pew was doing her best to stifle a cough.  Finally, when she could no longer keep it in, she muffled it into the sleeve of her coat.  Between organ pieces, she leaned over to Joel and apologized for the interruption.  Granted, we won't be going back to that kind of consideration, but it is not a bad thing to deny yourself, take up your cross and follow Jesus.... even while in the pew with kids and spouse in tow...
Posted by Pastor Peters at 8:11 AM

Though I have never had children to teach, I did have a mother who taught me. She no longer even knows who I am, but I know who she is. I know what she has done over the years - self sacrificing love (and many sacrifices I know not of). Thank you, mom, and the Peace of the Lord be with you.


On another note: I know people hate those who have no children advising them. Nevertheless, if your church provides a "children's sermon," keep your children in the pew with you. The thing is neither conducive to learning to sit still (thank you Fr. Peters for not having one!), nor do they learn more from it than the liturgy.

My two cents worth.

Joel Kuznik is a real blast from the
past. I graduated from the St.Louis
Seminary with his brother Rollin.

Amen! If the adults in my church were taught as I was, they certainly have forgotten! I miss the quiet sanctuary of my childhood.

I will never forget my freshman year at Concordia Lutheran College, Austin, Texas. The choir traditionally sang at the recital given by Prof. Harold Rutz and his son, Paul. While practicing, at the end of a session, Prof. Rutz, who was often serious but rarely grave, got everyone's attention. "Do not move, cough, or whisper during the recital." His point was that, any movement whatsoever would distract the musicians, and could produce disastrous results.

I still remember Prof. Rutz' counsel to this day and had opportunity not long ago to give it in a setting I don't exactly remember.

Thank you for this! We are relatively new Lutherans, escaping the "do as feels good world" of contemporary evangelicalism. Anyway, since our child was born we've done our best to teach her to participate as she is able. Its been a battle at times, a tear shed or two, but we are hoping the effort creates a lasting influence that God will use to preserve her in the faith. Anyway, reading something like this is encouraging!

The real SILENCE in LCMS parishes
on Sunday mornings is the dwindling
attendance. This can be attributed
to fewer members, fewer visitors,
and fewer excellent preachers in the
pulpits. May the Lord give us
more theologians in our pulpits who
proclaim the Law and Gospel and
apply it to the hearts of the hearers

"Considering the many trips my own mom took to take me out into the cry room (to make me cry)." I have similar memories, and am now thankful for my dear mom.

What we teach our children in church is reverence for God and respect for our neighbors. This is a place where we act differently, this isn't like sitting in front of the TV at home.

I see what you describe more often at recitals and public school programs, were young children roam about and even lay down in the aisles with little or no correction from an adult.

My wife and I have always preferred to sit near the front of the sanctuary and had no intention of changing this when our children came along. Besides, we reasoned that they were more likely to stay quiet and still if they could clearly see what was happening. By and large, this strategy has been successful. It seems to me that parents who sit in the back, in the pews that are "designated" for families with small children, feel less need to keep their kids quiet.

I have volunteered at my children's elementary school a few times. It always catches me off-guard how much less structured the environment is than "back in my day." For example, apparently hall passes no longer exist; if you need to go to the bathroom or a special class in another room, you just get up and go. Is it any wonder that kids exhibit the same kind of unstructured behavior in church?

^ In some churches because of accoustics, length of the nave or a balcony over the last few rows it can seem as if you're sitting in an entirely different building than what its like sitting up front. In many cases sitting farther up helps with children, but not in all cases. The harried sunday morning widow with two or three small children might just need some help from us empty nesters to sit with one of her kids while she deals with another.