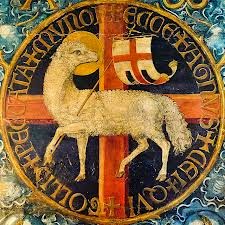 Two weeks ago I prayed at my father’s bedside.  Yes, he was old and, in the last two weeks of his life, very ill, but I am a son and I was not ready to give up my father.  I prayed that the angel of death pass him by.  Like Israel of old rushing their preparations to keep to God’s timetable, I took refuge in the mysteries of God’s will and His mysterious ways.  Late into the evening, my father died.  But the angel of death did not come.  Instead the angels came to usher him into the place of everlasting light and life.  He is not now dead for those who live in the Lord live even if they die and those who live and believe in Him never die.

But there is one for whom the angel of death did come.  No, I am not referring to the Egyptians and their stubborn refusal to bend to the will of God.  I am thinking of Jesus.  No blood was painted over Him.  No lamb sacrificed for His relief.  No second chance would save Him.  No hesitation of His will would avoid the outcome.  No chance this angel of death would pass on by in search of another.  Jesus came to meet the angel of death.  Indeed, death would not pass from Jesus to another victim but would meet its match in the One who was born to die, for the sins of the whole world and for the death to end death’s reign.

That is the Passover meaning of this day.  Christ is the Lamb of God who did not save Himself but gave Himself into death for us.  He has painted us with His blood in baptism.  He endured the loneliness of His Father’s rejection for us.  Our sins made Him ugly and unrecognizable to the Father who loves righteousness.  Jesus did not welcome the agony of this death but He did welcome the fruits that would be borne of His death for the life of the world.

This is what ties Holy Thursday and the Passover meal to Good Friday and Easter Sunday.  Christ meets the angel of death and dispenses him for all who trust in His saving death and who glory in His triumphant resurrection.  Hell is not a geographic place but the ultimate separation from the God who is light and life.  None of us need know this darkness and terror but Jesus had to embrace it alone and fully in order to save my dad and to save us.

When Christians sing “it is not death to die” we are not singing of sentiment or of some peace we have made with death; we are singing as those for whom Christ lived and died and in whom we too shall rise with Him to our own joyful resurrection and to the blest reunion in the Marriage Supper of the Lamb that has no end.

To explain all that would happen Jesus did not write a theological treatise nor did He attempt to simplify the great and eternal matters that He was born to accomplish.  Instead, He took bread, gave thanks and gave it to His disciples, saying, “Take, eat, this is My body which is given for you...”  And after supper He took the cup and when he had given thanks, He gave it to them saying, “Take, drink, all of you, this is my blood of the covenant shed for you for the forgiveness of sins...”  He kept the passover not with piety or prayers but with His holy self-offering of His flesh for the life of the world and His blood to cleanse all sin.

And now we keep it too.  We keep it for my father and yours, for moms and children, for brothers and sisters, for friends, and neighbors, who die in the Lord.  What is important here is that they do not meet the lonely death Christ endured but the death that is the tool of God to bring us from mortality to immortality, from perishable to imperishable, from an end to the beginning of all that God has prepared for those who love Him.  This is what we eat, what we celebrate, what we recall, and what we anticipate in this sacred and blessed meal. . . now and in all the days until Christ comes to drink anew with us in His everlasting kingdom.  For dad, for you, for me, for all the baptized, and for all who hear the Word of God and keep it with faith.  Amen.
Posted by Pastor Peters at 1:00 PM