A bishop protests Trump as dia­met­ri­cally opposed to any reck­on­ing of the Gospel of Jesus Christ. . . 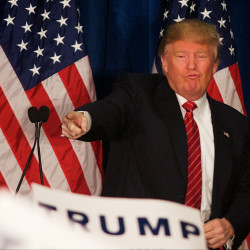 AN ELCA BISHOP announced on Facebook his plan to protest a Trump speech scheduled for Lenoir-Rhyne University, an ELCA affiliated school in Hickory, NC.  His post is listed below.  The question is not what a bishop can do or chooses to do as a private citizen but when he chooses to act in his official capacity as bishop and spokesman for the ELCA in that place.

Anyone who reads this blog knows that I have my own reservations about Trump and the phenomenon that has propelled him to the position of front-runner in the Republican free for all to select a candidate to run in November.  That said, I do not believe it is either wise or churchly to enter a race and presume to speak for the faithful or the faith wearing the clerical collar to garner notice and attention.  It is, in fact, I believe a grave abuse of the collar and the office to intervene in the political process in this way.  I am quite confident that God has not yet weighed in on which Republican (or, for that matter, Democratic) candidate is HIS choice to represent the party and to be elected in November.  I am also quite confident that at this point the folks in the pews and pulpits of Lutheranism are not united in their opposition to any one candidate or in the advocacy for one candidate.  When and if the moment arises when faith requires the Church to address who and why someone is running for political office, it will present itself within the parameters of the Gospel of Christ crucified and risen and the free exercise of the Church in speaking that Gospel to the world and living it out without constraint.  Until then, such public actions on the part of this or any other Lutheran clergy only diminish the overall credibility of the Church for the issues in which the Church not only can but must speak.

The news: Don­ald Trump is sched­uled to speak at Lenoir-Rhyne Uni­ver­sity in Hick­ory, NC on Mon­day at 10 a.m. L-R is a lib­eral arts insti­tu­tion begun by and affil­i­ated with the NC Synod of the Evan­gel­i­cal Lutheran Church in Amer­ica, to which I was elected bishop last May.

The stakes: A lib­eral arts insti­tu­tion, espe­cially in a democ­racy and even affil­i­ated with the Church, exists for the free exchange of ideas. No mat­ter how vis­cer­ally dis­taste­ful any par­tic­u­lar can­di­date might be to any indi­vid­ual or even to what the Church itself stands for, to deny any par­tic­u­lar can­di­date (and espe­cially the Repub­li­can front-runner) the oppor­tu­nity to speak is to fall prey to the very prin­ci­ple that out­rages us, i.e, “deny­ing basic human rights to oth­ers.” Free speech, par­tic­u­larly in a pres­i­den­tial elec­tion year, is a most basic demo­c­ra­tic right.

My posi­tion: This can­di­date, in my opin­ion not only as a pri­vate cit­i­zen but as a bishop in this Church, is a farce, an embar­rass­ment, and a dan­ger to nearly every­thing I hold dear. That he this late in the game is still lead­ing one of our major polit­i­cal par­ties with his rhetoric fueled by fear and anger is dia­met­ri­cally opposed to any reck­on­ing of the Gospel of Jesus Christ I can imag­ine. Even lead­ing “Evan­gel­i­cals” have said as much.

My plan: Assum­ing he indeed shows up, I plan to be there, cler­i­cal col­lar and bishop’s cross on, to protest NOT the fact that he’s there but his plat­form that would deny refugees access, that would invoke vio­lence at every turn, and that would stir up big­otry and hatred. I could go on, but you get the point. I would be deeply hon­ored to be the one escorted out or even punched out as the heck­ler that Trump so con­de­scend­ingly points out at each rally. But I won’t try to drive out hate with more hate and anger. I will stand there, pray, sing, march, chant, wave signs, what­ever I need to do and with what­ever con­se­quence to say, “This is not who we are, Amer­ica. This is not who we are, North Car­olina. This is not who we are, Church.” And I hope the reporters and the cam­eras are there, and I hope they might care what I/we have to say in the name of Jesus.

Thus saith the Lord ought not to be bantered about lightly but saved for that Word that endures forever and for the speaking of it through which God convicts the soul with regard to sin and by the power of the Spirit works to bring the sinner to faith and repentance.
Posted by Pastor Peters at 6:00 AM

"This can­di­date, in my opin­ion not only as a pri­vate cit­i­zen but as a bishop in this Church, is a farce, an embar­rass­ment, and a dan­ger to nearly every­thing I hold dear. That he this late in the game is still lead­ing one of our major polit­i­cal par­ties with his rhetoric fueled by fear and anger is dia­met­ri­cally opposed to any reck­on­ing of the Gospel of Jesus Christ I can imag­ine."

Since when did the ELCA start believing in the Gospel? The god the ELCA has created for itself bears no resemblance to One described in the Bible.

I pray for our nation and the universal church more today because of American politics than ever before. My faith tells me money can be a false God and idol and that is what I suspect many people are worshipping (voting for).