Artisans in service to the Gospel. . . 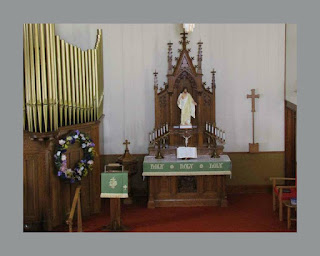 I grew up where there was scant art in the nave or chancel -- except, of course, an oak altar so elaborate it stood in stark contrast to the rest of the church around it.  It was carved to soaring heights and on the front was embedded a splendid carving of the Lamb of God sitting upon the book with ribbons flowing from its pages.  On the altar top was a crucifix of modest proportions and above it on a shelf was a 3 ft high replica of the Thorvaldsen Christus.  The paraments were damask superfrontal, pulpit fall, and lectern fall with a book marker on the lectern as well.  The chalice, paten, host box, and flagon were sterling with some of the most elegant carving, including a three dimensional Lamb of God in silver atop the flagon and host box.  (Alas, someone broke in and stole the silver some years ago.)  Nearly everything else was rather simple and without adornment.

Of course, I am under no illusions.  The altar was most likely the fruit of some limited mass production, as were most of the other items there.  None was a commissioned piece but all were done with great attention to detail by artisans of some care and accomplishments.  If only the rest of the building had shown a similar bent to the arts!

The church I first served and the one I now serve both were stark and plain, without any ornament whatsoever.  At least that is how I found them.  In both places I attempted to add carefully to the architecture with classic paraments, a new baptismal font of ample proportions, processional crucifix and torches, tabernacle, and liturgical banners.  Since we did build a splendid new sanctuary where I am now, we were able to add liturgical painting, a custom made altar, pulpit, lectern, and other wooden appointments.  The stained glass is custom and wonderful in design and execution.  We have a hand built pipe organ as well.  We have mostly limited production manufactured pieces but of the highest quality.  We have enjoyed the fruits of artisan hands from among the membership in so many ways as well.  We have also purchased many items from churches closing and thus preserved the best from older installations that required only modest cleaning and some re-plating.

Today I take a moment to give thanks for the arts, for the minds of those who design and hands of those who execute pieces for the service of God.  It is a sad thing that we have too long forgotten that arts in service to the Church teach, inspire, encourage, and direct us to the mystery of grace revealed in Christ, our Savior.  And to focus on this I direct you to the marvelous brief story with some pictures of the embroiderers who serve the Church of England at St. Paul's Cathedral, preserving the past and creating for the future.  The arts and artisans are worthy of our thanks and our praise as they teach us Christ both in example of devotion and in the fruits of their labors.
Posted by Pastor Peters at 6:00 AM

Is this Pastor Peters that used to serve at St. John's Lutheran Church in Sacramento?

Sorry, no. I have only served on Long Island, upstate New York, and here in Tennessee...