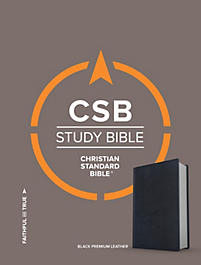 Holman some time ago published the Holman Christian Standard Bible.  They now believe the time has come to update the HCSB and in doing so have created a whole new version (as is we were short of versions).  They insist that this Christian Standard Bible translation reflects advances in biblical scholarship, has received both input and direction from a diverse group of Bible scholars, pastors, and readers, and offers an improvement not found in existing translations. In relation to the HCSB, the claim is made that all the changes incorporate both their strong commitment to the  faithfulness to the original text as well as a desire to create a text with the clarity needed for a modern audience.

The list of  biblical scholars who participated in the CSB comes from 17 denominations -- a variety of conservative, evangelical denominations, including Southern Baptist, Lutheran, Presbyterian, conservative Anglican and non-denominational Bible churches.  Lutherans include Andrew Das (ELS) and Andrew Steinmann (LCMS).  Holman itself is a division of Lifeway, the publishing arm of the Southern Baptist Convention.

According to their own PR, the translation uses the method Optimal Equivalence, which balances contemporary English readability with linguistic precision to the original languages. This process assures that both the words and thoughts contained in the original text are conveyed as accurately as possible for today’s readers.  You can read some verse comparisons here.

You have already heard of the Lutheran translation project begun by the Wisconsin Synod.  I must admit that while I understand the desire for a new translation (I have often thought that the Peters Perfect Paraphrase would solve all the problems!), I am not sure that anyone needs or wants a new translation.  Further, I am not at all sure that another translation would add anything to the versions already available.  In fact, I fear it would only further divide the readers of the Bible and contribute even more to the idea that a translation is a denominational effort or one guided by presuppositions that determine the outcome -- both of which undermine the idea of objective truth.  In addition, I have often spent a goodly portion of our Bible study time discussing the differences in the translations used by the people there -- time that could have been spent more directly addressing the text and what it means.  I am not at all sure having one more translation in the hands of the people will help and fear it would only further distract us.  That said, I am not ready to condemn something before I have had a chance to review it.

I would love to hear your own opinions.  Tell me if you have looked over the CSB and what you think of this addition to the marketplace.  Unfortunately, that is what it is.  A marketplace.  Not a small measure of the decision to produce a new translation is the desire to make money.  Given the number of editions which accompany every translation, I expect we will see some stir from all of this.
Posted by Pastor Peters at 6:00 AM

I'm afraid quite often it is simply a matter of more translations means more income and more slots for scholars.

I haven't read the latest translation of which you speak. I am skeptical at best. I wonder how the translators from different denominations can agree on anything, but I will let others study the matter. As for me, I will not even read the new translation. I will simply stick with the version I love, the NKJV and KJV. I know some Christians criticize these old versions as well, but at my old age of 72, I have no desire to read new translations. My Bible has side notes which I scribbled, underlined verses, and highlighted areas. And besides, it is still the word of God and faithfully interpreted.

I'm so thrilled that yet another ecumenical translation of defective manuscripts rescued from kindling bins in heretical monasteries is here to spare us the untoward effects of beautiful language, history, and the textual fruit of the Reformation. This vital works shouldn't stop with the Bible: as the new translation informs us, "great" is now a synonym of "good," although it can also be one of "big;" perhaps we should change "How Great Thou Art" to "You are SOOOOOOOOOO Big" so as not to sow confusion in the ranks.As you can plainly see, there is much work to be done.

Evidently, I am way behind the times. What does HCSB stand for? I've never heard of it.

Wouldn't it be better to look at a translation before writing it off? The comment is just saying "I don't like the idea of more translations" - a little weak I'm afraid.

@Anonymous: Pr P provided a link whereat one may sample verses and compared with other translations. I went to that link and was decidedly unimpressed.