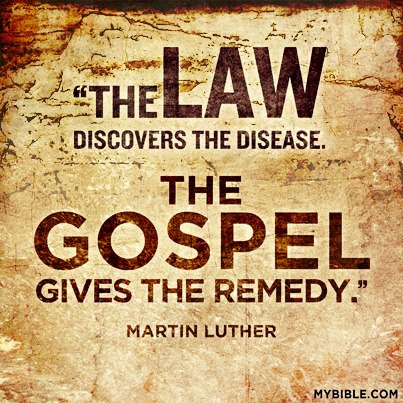 Pastor Chris Jackson has a very fine piece on the First Things website about the characterizations of Luther that worked and those that didn't.  In particular he zeros in on the false distinctions between Law and Gospel that are as common among Lutherans as they are outside of Lutheranism.


. . . you shifted the definitions of “Law” and “Gospel,” to dwell on the psychological effects. “Law” becomes simple awareness of God apart from Christ, an awareness that always leads to dread of him as disapproving and wrathful. “Gospel” becomes a counter-account of God, that depicts him as accepting and approving through Christ. These two knowledges of God are not reconcilable; rather, Christian faith is discussed as living in the paradoxical tension between these two polar understandings of God. . . [you end up having a God with] Borderline Personality Disorder, a God who in one breath says, “I hate you,” and in the next breath says, “I love you.”

The proverbial seven headed Luther has given way to a two headed God and Luther is marked as the man who drew the portrait in the first place.  As Jackson puts it:


For hundreds of years, Lutherans understood both Law and Gospel in content-laden terms. The Law was God’s will for human conduct, all the “thou shalts” and “thou shalt nots.” Because men disobey God’s will, the Law condemns—but it does much more than condemn, and it isn’t even fundamentally condemning. The Law also protects us from harming each other in the civil realm, and it guides the Christian in pursuing a holy life. To those who through the Law become conscious of their sin and repent, God gives the Gospel, the message of forgiveness through Jesus Christ. With this understanding, the Law and the Gospel are united in the one will of God, a will of Fatherly love and kindness.

But somewhere along the way we Lutherans did end up defining Law and Gospel not in terms of content but in terms of effect and, whether that corresponded with the popularity of Werner Elert or not, it has been a thorn in the side of Lutherans for a long time.  Jackson is worth a read and more.  Take a gander at the ways we banter about Law and Gospel and see if we are not falling victim to the very trap that has been set for us -- a schizophrenic God who speaks different words out of the same mouth and ends up a terrible contradiction -- and there is where we hang our hopes of salvation!

Perhaps this is exactly the issue we have dogged since the 1960s -- Gospel reductionism and hard (or soft) antinomianism.  Perhaps Elert is the culprit but if so, we have been willing accomplices.  While it is surely possible to find anything you want in Luther and to cut and paste his words to justify just about anything, Luther's preaching does not shy away from the Law both in terms of its pointy finger and its lamp to our feet to lighten our path and show us how then to live.

Lutherans are hard pressed to be systematic theologians.  We do, after all, allow all the paradoxes to stand.  But one thing we cannot allow to stand is the idea that God is two headed and that the Law and the Gospel battle one another in the mind or heart of God.  The will of God is not forked.  It is one will, one good will, and one gracious will.  The Law has been given a prime purpose it was never created for -- to justify and save the sinner.  And in the same breath, the Law has been turned into the wrath of God never really satisfied and hope has become the hunch that just maybe you can approach God on a good day with the right frame of mind.  Nevermind that the Gospel has become tacit approval of just about anything we want -- absent any real direction from the Law there is nothing left except divine approval for our darkest desires.  So some Lutherans have turned the Gospel into a principle that governs everything and can do little accept sanction whatever new or old sin happens to be in fashion.  Jackson has it about right -- taking his cue from the Formula of Concord -- and we could stand to hear more from this fellow (and less from those who see a two headed Luther promoting a two headed God).

The clear distinction between Law and Grace is evident in the New Testament. Praise God we have His word in writing. Luther did not make a new discovery or invent Law and Grace. It is there when you look for it. The problem was that the Catholic Popes and the religious system they created through violence and intimidation focused on works and the Papal dictatorship instead of Bible truths. Why do we think they were against any Bible translations into vernacular languages and killed those before Luther who merely sought to translate the Bible for common people?

“Take a gander at the ways we banter about Law and Gospel and see if we are not falling victim to the very trap that has been set for us -- a schizophrenic God who speaks different words out of the same mouth and ends up a terrible contradiction -- and there is where we hang our hopes of salvation!” But that is precisely what we believe when we assert that God the Father, Who said, “This is my beloved Son; listen to Him,” punished and abandoned His Son on the cross. It goes so far that I have had one LCMS pastor write to me, “I know that because He abandoned His Son, He will never abandon me.” Truly putting the disciple before the Master, besides being absurd.
Peace and Joy!
George A. Marquart

Mr. Flanagan:
The problem with the Law and Gospel distinction as we, Lutherans, understand it, is that there is no single word in either the OT or the NT that means “Law” the way we define it. There are more than a dozen words in the OT, all translated as “nomos” in the Septuagint, none of which fully carry the Lutheran meaning. The NT uses only one word, that same “nomos” (with one exception, when criminal law is referred to), which also does not carry the Lutheran meaning. That is why we had to define the word in the Confessions. But all things are there if you are convinced from the beginning that they are.
Peace and Joy!
George A. Marquart