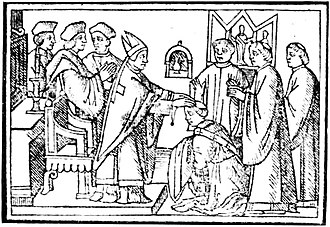 There are those who believe the Church has no right to question the resolve of those who believe they are called by God or any business setting up criteria to use in determining who will set apart for ordination.  In fact, there is good evidence for this and it comes from the earliest days of Christianity.

In the aftermath of the resurrection of Jesus and the death of Judas at his own hand, the Church seemed poised to do nothing but await the fulfillment of the promise of the Lord for the coming of the Spirit.  But in fact the Church was not idle during that time.  Under the guidance of the Spirit, the apostles gathered to fill in their number and replace Judas.  In the Acts of the Apostles, St. Peter not only discusses who should replace Judas but lays out a set of criteria for the one who would replace him.  The apostles did not presume to know the one whom God had in mind but they did know that whoever was to replace Judas had to be one of them, one of them from the beginning of Christ's public ministry, and one of them who was not simply a follower from afar but close to the Lord and to them.  St. Peter them laid out that criteria before naming names and once the qualifications had been laid down, and only then, did the apostles pray to God for guidance, and ultimately Matthias was chosen.

We have, of course, the qualifications laid down by St. Paul in his letters to Timothy and Titus.  These are certainly determinative for those who would presume to serve as a pastor or deacon or bishop of the Church.  However, these are not solely determinative.  In other words, nothing prevents the Church from further narrowing the list and setting up requirements in addition to what St. Paul has laid down.  It was in this realm that the Church developed a seminary and laid out a curriculum as well as an internship that became the minimum requirement of those who serve God's people in His name.

Some churches have abandoned St. Paul's list.  It is no secret that many churches no longer ordain only men and have allowed those who live in conflict with the Biblical model of marriage (one man and one woman).  But it is also true that in this day and age many have raised questions about whether or not the churches are asking too much and narrowing too small the numbers of those whom they will ordain.  The advent of online education and the growing need for pastors to replace the boomer heavy ministerial rosters of most churches.  My own church body has moved in this direction.  Residential seminary education is now one, perhaps the primary, but still only one of the options available to those who seek to serve as a pastor.  What is interesting is that while Missouri and others are looking to relax requirements, the Roman Catholic Church has added to the requirements and lengthened the time of preparation.

In the end it should be noted that no one has a right to serve as a pastor or is owed a place in the ministerium. It is well within the Church's perogative to add to St. Paul's list.  It is also worth noting that the Scriptures warn against laying hands too quickly on a convert.  The needs of the churches are not best served by eliminating the criteria but by making sure that the best and the right men are set apart by Word and prayer and the laying on of hands to stand in persona Christi in delivering God's Word and Sacraments to His people.

Well said Pastor Peters. As one with SSA I thought that I had a vocation from very early but my parents and family told me that I didn't really want to be a priest so I didn't go that route. Perhaps God was speaking through them. Now I hear now from people who know that I have SSA, who attends Mass (every now and then) and is a believer, that i should be a priest. Think of the witness, they say, I would be in helping LBGTQZBADA (you name it) in "affirming" them in their illusion. It is my right, according to them, to be a priest if I want to be. It's all about rights isn't it? They have no clue what vocation is and what it entails. Alas, if I had the vocation I thought I had, the Church, then, told me that I should stay away and with good reason. Now, it's nebulous to say the least.

Thank you for your clarity on this.

Every part of the Church that has begun ordaining women is suffering major departures from Truth, from Faith, from Salvation.

I am often told, "woman can often be more pastoral than men." In the sense that women may be more approachable, more compassionate, more understanding, this may indeed be true. But that misses the true role of the pastor, to bring the Sacraments and the Word to his people. WO will be the downfall of the American Church.

”Under the guidance of the Spirit, the apostles gathered to fill in their number and replace Judas.”
There are several problems with this assertion. First, the 11 Apostles never cast lots to resolve the question, “Should we find someone to replace Judas?” Therefore, it is wrong to say that God chose Mathias, since God was only given a choice between two people, not on the principle of the matter.
Secondly the Apostles ignored our Lord’s saying, John 15:16, “Ye did not choose me, but I chose you, and appointed you, that ye should go and bear fruit, and that your fruit should abide: that whatsoever ye shall ask of the Father in my name, he may give it you.” They forgot that calling Apostles is something only our Lord can do.”
Thirdly, the second of the two verses quoted, Psalm 109:8, “Let another take his position of overseer,” describes the plot of evil men to replace an honest person. Certainly not appropriate to the matter at hand.
Fourthly, on several occasions, after the election of Matthias, Acts speaks of “the Eleven.”
Fifthly, St. Paul calls himself an Apostle a total of 15 times. Was he then the 13th Apostle, or was Matthias’ Apostleship illegitimate.
Sixthly, the answer to the previous question is found in Revelation 12:14. When the Holy City came down from God, “…the wall of the city had twelve foundations, and on them were the twelve names of the twelve apostles of the Lamb.” Was one of those name Matthias, of whom we hear nothing further in Scripture, or was it St. Paul, who called himself an Apostle 15 times?
There are places in Scripture, where events are related, without stating whether they were right or wrong. It is up to the interpreter to decide. Another such place is in 1 Kings 19, when Elijah flees Jezebel.
Peace and Joy!
George A. Marquart