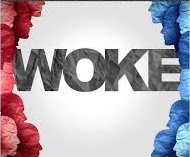 What we face in the woke culture of the West is nothing less than an assault on every truth except their truth and every fact that does not support their truth.  Does it sound like I am making a radical statement?  Well, I am.  It is a radical wake up call to a people who are lazy and complacent -- and here I am speaking to Christians who think that this is not the state of things or else the craziness of the moment will blow away and things will go back to normal.  There soon will be no normal except that which the woke culture defines.  While this is in part due to the retrospective view of history that is even now undergoing a transformation, it is also due to the fact that our woke culture and willing society will allow nothing but their point of view to be expressed.

Yes, religion will always be free in the heart and mind of the believer but not in his or her mouth and not in public -- even in worship services.  Nobody will show up to your door to take away your Bible or your prayerbook or your catechism, but they do not need to do this.  If what is in your Bible, your prayerbook, and your catechism are prevented by law from being expressed in public, the end result is the same as a book burning.

No, you will not be sent to camps where you will be indoctrinated into the new point of view, but you will be censored and certain occupations and positions will no longer be open to those who dare to disagree with the woke point of view.  If you think I am falsely sounding an alarm, look at how those who run social media routinely restrict or ban certain people and certain points of view.  It was once said that if it was true, the truth would withstand the threats of lies and the power of deception.  The truth that is prevented from being expressed does not have to be debunked in order for the lie to win -- it has already won by simply allowing no opposition.

In America the examples are many.  Trump, no matter what you think of him, has been silenced by the social media of the day, tarred and feathered by accusation, and will be hunted down in courts until he is silenced.  Whether he deserves this or not, who would have thought that such a thing could have happened until now?  Why is his point of view so dangerous it cannot be allowed to be heard?  Did we not go through something like this when communists and communism was thought to be a threat too powerful to be allowed to speak?  How did that turn out?

The methodology that would limit access to media and prevent opposing points of view is not conservative but radical.  It is the means by which fascists and despots once ruled the day.  We thought that a world of free news, free travel, and free ideas would prevent fascists and tyrants but now the very tools of these disgraced rulers and ideologies are being used against the very ideas that would challenge sexual liberty, gender identity, political dissent, and different views of a pandemic.

At the core of there are grave questions we must soon confront.  Is a political and social point of view so fragile that it cannot be questioned or challenged?  Is it so weak that it must be propped up by force and supported by threat against any and all who disagree?  Is liberty itself something so fragile that it can be killed by a small number of protesters turned rioters in the Capital?  Is the population so ignorant or foolish that they must be sequestered from those who disagree with the politics, social movements, and moral values promoted by the current ruling class?  Can we disagree with the people who sit in Congress and in the White House and in the Supreme Court building and still be patriotic Americans?  Is religion that offends the liberal and progressive platforms still a religion protected as constitutional right and freedom?

America is not alone.  Even now Canada’s Parliament is considering a bill (C10) that would censor public statements of basic Christian teachings, such as about sex and marriage. It would also censor public criticism of the government, such as possibly social media postings about the Freedom Convoy and any dissent from Covid regulations.  Right now in Finland a politician and a Church are on trial for the words found in any and every Bible.  When courts do not provide the kind of immediate penalties, it is not above such governments to freeze bank accounts and for employers to fire otherwise exemplary employees on the basis of their politics and religion.  Is this a step forward or a step back?  Is it occurring under an economically or socially conservative government or are these things the tools of the progressives seeking to enforce their point of view and squelch all dissent?  The woke army may be coming for you.  We have seen how it worked in the past.  Will we be strong enough to fight against the woke army now?  We shall see....

Might I suggest an alternative approach to what “woke” is about and the fact that it has resonated so widely with so many. For those of us of an advanced age, woke is nothing new. It began in America just before and during the Clinton years. The generation of that age was characterized by “getting used to the idea of disillusion.” The normalization of divorce, made easier through laws enacted during the Reagan years, created a new reality of broken homes and the dissolution of the economic and social stability of 50% of marriages. For more and more Americans, the Dukakis slogan of 1988, “good jobs at good wages” was becoming an uncomfortable pipe dream. Globalizing trends in business and technology, epitomized by NAFTA’s “giant sucking sound,” or offshoring of jobs, eroded opportunities for workers. The housing market exploded, with foreign companies competing with average Americans in purchasing homes whose prices have escalated 20% over the past year alone. And the recognition of the need for diversity and inclusion of minorities on a national scale was first part of the American conversation during the 1990s.

Up until this time, from the late 1960s through the 1980s, there was more of a model of raising all Americans to meet a certain general standard that was colorblind and merit based. As time went on, there was a general recognition that, despite the intention of promoting the general welfare and “training Americans for the jobs of the future,” large numbers of Americans were being left behind. Drug addiction exploded as a means of escape and early mortality for Americans during this time. “The Corrrections,” “Bowling Alone” and “Hillbilly Elegy” were popular books that chronicled the increasing disillusionment, isolation, and despair of many Americans, despite the rise of social media.

Woke is a contemporary response to all of these changes in society, and mainly focuses on the limitations and disparities in opportunities experienced in America due to race, gender, and sexual orientation. The popular movie “The Matrix” from some twenty years back envisioned reality as an information technology/robot controlled machine, who were represented in the matrix of illusory experience itself as domineering white middle aged men who in reality were part of a malevolent machine that literally sucked the life out of humans. Being woke in the movie meant being aware of and opposing the reality of the powers behind the facade in life, powers that worked to exploit and keep society in a state of delusion.

The opportunities for the Church in a woke culture should be obvious. Jesus tells us as disciples to love others, especially the poor and marginalized, to judge not, and to repent of our sins. Woke culture recognizes a broken world. It was not too long ago that it was widely opined that the biggest challenge for the modern church is convincing people of the reality of sin and the need for justification. Woke culture unexpectedly provides the Church with this opportunity to proclaim in word and deed the Savior’s love for all in calling us into a new life that is radically different in love and purpose from that of society.

It was nice to live with freedom of religion and free speech for so long, but looking at history in the long term, it is the usual case that autocrats, dictators, Marxists, and today’s woke crowd have practiced systemic suppression of dissent. Bent on gaining and retaining power, these forces of evil do the work of Satan. So what do we do about it? Put on your armor, prepare for battle, and stand up. Keep your faith. Draw closer to Jesus, and to your fellow believers.

The questions you pose are excellent. However, these questions must be confronted not soon, but now. Wokeism has already infected every sphere of our culture. It is rampant in our public schools and rapidly seeping into even Christian colleges. The current administration in Washington is woke to its core. So-called Christian denominations like the ELCA and the Episcopal Church U.S.A. have clearly succumbed to the woke ideology, as have some influential “Big-Box” churches. Afraid of losing market share, more and more large companies are embracing wokeism. Even companies that pride themselves on being faith-based Christian organizations are drinking the woke Kool-Aid as they rush to raise the diversity flag to include all sexual orientations on various governing boards and committees, no matter how contrary to biblical morality. (Note: I am not referring to employees of these organizations as they must abide by laws regarding discriminatory hiring practices. Or that we should not respect those we differ with.)