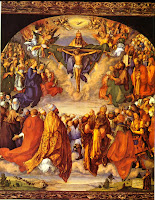 Often people like me are accused of repristination (dictionary defines that as restoring to the original state). Those interested in what the Church has believed and taught from the beginning (tradition), in the confessions of the Church that have been normative for doctrine and practice, and the liturgy in which that confession and tradition expresses its life are denigrated as people out of touch with today. In contrast to this are the people who are trying to be faithful to the content of what is believed but creative in its application and life within the Church (these are the missional folks for whom outreach is the primary purpose of the Church).

It strikes me odd that I am accused of repristination. I have no desire to restore the Church to her original state (about 40 AD or so). I welcome and delight in those things which have been added to the faith and life of the Church through the wisdom and faithfulness of the fathers (early and late).

I welcome the creeds and do not want to go back to fighting the battles of the Trinity -- battles which the Church settled through the use of the creeds (Nicene and Athanasian, in particular). I believe we are the richer for these faithful statements of what Scripture teaches and what has been believed by the orthodox in faith from the beginning.

I welcome the development of the liturgy -- the slow, even methodical development of a form and specific words that have left us with the western rite. Not all the accretions were salutary and some downright dangerous but, with any development, the Church must square the new with the old, judge the addition through the lens of her confession to determine what will stay and what will not.

I welcome the addition of the pipe organ and polyphonic music, Gregorian chant, hymn singing, etc. I think that the Church has done a credible job in sifting through the musical forms to discern what is appropriate and beneficial to the life of the Church and the individual Christians within the Body.

I do not want to go backward to some scholarly ideal or sentimental golden age. BUT I also want faithfulness. I want the new to be judged by the faithfulness proven within the old. Truly we are heirs of an astonishingly rich tradition and each age will add to this living body of confession, liturgy, and life... but within the parameters of Scripture and slowly, even deliberately, and not willy nilly.

Thanks for the quote from Pelikan. I vaguely remembered it, but not who said it.

We have come from a background of Regulative Principle folk who demonize the Normative Principle. I truly believe Pelikan's quote fits. The Regulative folk are always trying to "get back to the New Testament." I've come to see that this is neither possible, nor desirable.

Thanks for the faithfulness you show each Sunday.