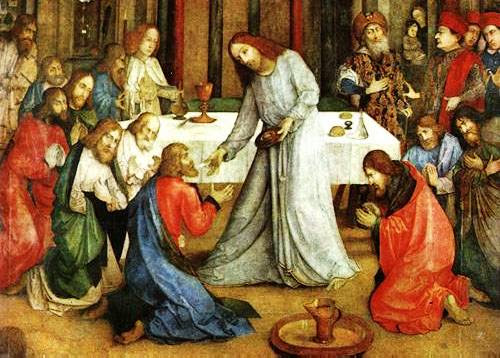 For years I preached about the Eucharist until people in both places said to me, "If you point to the altar one more time and there is nothing there, I think I am going to scream. Why can we talk about the Sacrament but we cannot have the Sacrament?" I did not radically change what the people did, but they saw in my pastoral leadership the reverence, joy, and comfort in the liturgy. I taught them the Catechism and Confessions. And it came... not in my time but it came... and it has stood the test of time... in both places...

I welcome those surveys that suggest that young people are interested in liturgy. But that is not why we are liturgical -- we do not use the liturgy to appeal to these young people or to anyone else. The liturgy is what we have been given by those who went before us, it is rooted in Judaism and the Synagogue and in the Upper Room. The Western Rite was not the concoction of a Pastor trying to appeal to people but the wisdom of the Church through the ages of how to set Scripture to verse and song within the twin peaks of Word and Sacrament. It is what identifies us with those who went before us and it is the domain of the Lord and His gifts (hence Divine Service).

Even when people want and like the right thing, that is NOT why we do it. Because it is not about wants or likes -- it is about worship that is faithful to our confession and confession which is lived out in our worship. It is about identity -- Word and Sacrament, Law and Gospel, Catholic and Evangelical. It is about faithful providing the pattern which embodies the means of grace (both Word and Sacrament) within a framework of Scripture (explicit and paraphrased) that is not Lutheran but catholic and the proper possession of all churches (even though few acknowledge or see the blessing in this treasure).

In order for these two congregations to be liturgical and Eucharistic after I am gone, it has to be part of their understanding and identity. We have got to stop talking about wants and likes (even when they are right on) and we have got to begin talking about faithfulness and confession. We don't pick hymns on the basis of wants or likes but based upon the lectionary so that these hymns become an integral part of the whole of the liturgy. We don't pick choir anthems on the basis of what we like or want but on the basis of the place of the texts and tunes as one piece of the liturgical whole. We don't preach what we want or like but what the lectionary provides us so that the people in the pew get a complete diet of the Word of God and not our own personal preacher favorites. What we do on Sunday morning is not the dictate of desire or feeling or appeal -- it is rooted in Scripture, expressed in our Confessional identity, consistent with catholic tradition, and true to the Gospel of Jesus Christ. Anything less than this and there is little room to justify whose wants or likes are better or worse than others except taste -- and what happens on Sunday morning is not driven by personal taste, not even mine.
Posted by Pastor Peters at 7:28 AM

From a 'newbie' Lutheran (one not born and raised in the Church), AMEN.

We have not searched for literally years to find a church that suited our tastes. We searched years to find one that did preach the Word, and administer the Sacrament. We just didn't know it was there all along in the Lutheran church, and in the liturgy.

We were warned all our lives by non-liturgical churches/denominations not to get sucked in by these formalistic church people. What a blessing from God to walk into a church and almost immediately know we were home.

Looking back even from this short time of being in the Lutheran Church, we KNOW we could not go back. Christ has been over abundantly gracious to us.

One clarification. We would not have called it Word and Sacrament ministry when we first started the search. God didn't open our heads and dump in all we needed to know about what He was doing (does He ever?).

Our Lord sent us on the search for HIS church and HIS worship.