The Purpose of Conversation 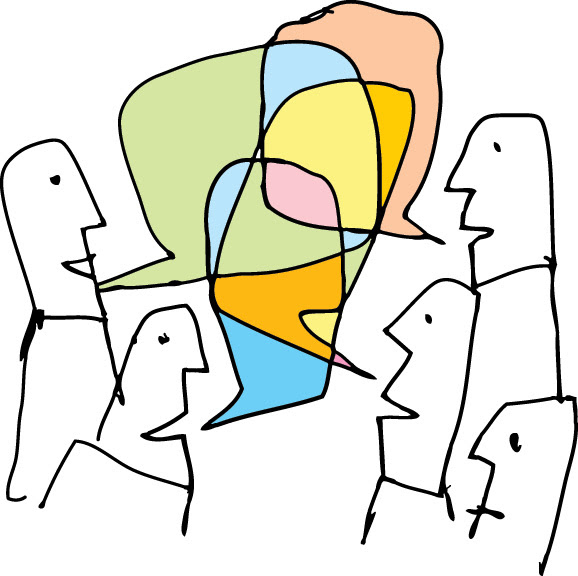 Being from Nebraska, I was interested in what the ELCA Bishop of Nebraska had to say about the ELCA Church Wide Assembly actions with respect to GLABT and, in particular, ordination of GLABT in PALMS. (If you don't get the acronyms, you are hopelessly behind the times and need to do a google search before you read any further -- that started out a joke but, sadly, it is not so funny.)

In it I heard the typical bureaucratic vocabulary urging patience, attention to the eighth commandment, and "conversation." Yes, conversation. You would think all the talking had already been done before and during the CWA that adopted such a radical change. But, no. There needs to be more conversation.
Let we blame the ELCA alone, we have the same bureau-speak in the LCMS with respect to the "worship wars." We need patience, we need attention to the eighth commandment, and we need conversation. Again, you might think there had been enough conversation given the number of trees felled to publish articles and books on this subject (or cyber trees as the case may be). But, no. There needs to be more conversation.
Now I am all for conversation. I am guilty of spreading cyber ink and actual copy toner on paper on this subject. But... a caveat... it is my experience that the purpose of this conversation, though not formally admitted, is to get the people who hold to the "traditional" opinion to either change their minds, keep funding the changes while they fume and agitate, or stop being the thorn in the side of those (usually in the leadership) who are moving toward these changes.
In other words, the purpose of these "conversations" is never to agree to rescind the fateful actions of the ELCA... never to revisit closed topics like, the ordination of women, for example... never to stop this foolishness of contemporary worship forms that have nothing to do with our confessional identity... no... the purpose of these conversations seems always to bide time while the NEW or changed perspective has time to root itself and become accepted, tolerated, dare I say, the norm for the church...
Now I am all about honest conversation... over sexuality... over abortion... over worship forms that flow from our Confessions... but if it is an honest conversation, then it must include the possibility that those in favor of the new and different must allow for the possibility of change and not just those who hold to the "traditional" viewpoint on sex and gender, abortion and pro-life issues, and the evangelical catholic character of the liturgy.
So lets talk... but not as a real conversation in which the give is not only on the side of those against GLABT relationships as the equivalent of marriage... not only on the side of those who believe within marriage fidelity and outside of marriage chastity... not only on the side of those who believe that abortion is always wrong and life is to be nurtured and respected and not ended when it fits our mood/need... not only on the side of those who believe that what Lutherans do on Sunday morning should bear some resemblance to what they have confessed in their Book of Concord...
Generally, I am a pretty quiet guy... I do not rant and rave against other congregations, I do not interfere in their affairs, I do not begrudge anyone their civil rights, and I do not want worship police to inform and enforce a certain page in a certain hymnal... but I do tire of all of those conversations designed to change me... especially when what I believe is what Lutherans believed, taught, and confessed on these issues... generally without much doubt... for most of Lutheran history... Talk -- yes... but an honest conversation in which those who hold the position of change are honestly open to changing back to what was... if that is ever possible again.

Pastor, is there a good background paper available where the "uninformed" can get the scoop on what the debate is about?

When you define this as a "worship war" are you saying that two (or more) sides are struggling for supremacy to impose their will on the other side? What really is the end state sought here? That we all become either "liturgical" or "contemporary"? Or is it a struggle to just to define and maintain some kind legitimacy and balance for both--as is, you're ok, I'm ok.

You once said something (it was in the context of a question on baptism) that might apply here. If God has let Baptism (change that to Liturgy) go on for 2000 years, doesn't it say something about it's 'rightness?' Why do we (who are vapors) think we have a right to fiddle with what God has put in place? The Liturgy has only changed minimally in that time. What changes have ocurred have done so slowly, not overnight in a Synod meeting.

Also, it looks to me as a 'newbie' Lutheran that the conversation is awfully one-sided. Am I wrong?

Jonathan, if you are a listener to Issues, Etc. try their on demand page, and (I think it's at the top of the page) you'll find there a series of interviews about what's facing the LCMS.

Peace at any cost is unaffordable. Just ask an honest Southern Baptist!

The war is a battle for supremacy but not of one group or opinion -- but for the supremecy of the Word and Sacraments, the means of grace, which do what they promise... will this be the center of the church's Sunday gathering or will it be me... This is not about which page number in which hymnal to use but whether the worship of the Church flows from the Church's confessional identity or whether it is foreign to that identity...

Thanks for keeping me on track, pastor.