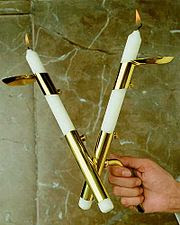 According to Wikipedia, the Blessing of the Throats is ritual usually observed on the feast of Saint Blaise (February 3). Now St. Blaise is thought to have been born in 316. We believe he was a bishop of Sebastea in Armenia who was martyred under the reign of Licinius in the early fourth century. The first real reference we have to him is in manuscripts of the medical writings of Aëtius Amidenus, a court physician fo the end of the fifth or beginning of the sixth centuries. There his aid is invoked in treating objects stuck in the throat. According to legend, he helped a boy who had a fish bone stuck in his throat.

One method is the consecration by prayer of two candles, which are crossed and held over the heads or against the throats of the people being blessed. Another method is to dip the wick of a candle in consecrated oil, and to touch the throats with the wick. The blessing usually given is: "May God at the intercession of St. Blasius preserve you from throat troubles and every other evil." After which the priest makes the sign of the cross.

m the fact that Lutherans tend to be somewhat blase' about Blaise, I have always had a strange fascination about this ritual, in particular about the utensil used to hold the candles in a criss cross fashion against the throat of the person receiving the blessing. It is a curiosity of mine that goes without explanation. I have only seen it done once. I am not inclined to do it on my own, but, well, it is one of those curiosities that will not rest... and so while the rest of the world is thinking Candlemas or Puxatony Phil, I am thinking beeswax candles, crossed and held in place by an ingenious brass appliance to restore those with throat issues... well, I cannot explain it... but now that I have admitted this in public, it may be easier for me to set it aside and go on...

Posted by Pastor Peters at 7:44 AM

Well, having had my throat blessed every damn 3 February for years, I never saw one of those gadgets in my life. We just tied two candles to-gether, or held them that way.

Maybe the Red Cross can set up short demonstrations of the Heimlich Manoeuvre in the vestibule.

Pastor, what would the appropriate blessing be according to a Lutheran rite?

Scroll down to see picture of two 7/8" beeswax candles interwined at the base.

As interesting as this is I can't help but suspect that possibly lighting one's neck on fire might not be quite as liturgically or doctrinally sound as one might assume :-/

Also me being the mouthy guy that I am, I can't help but wonder whether among the various throat troubles the "intercessions" of St. Blaise prevents would include third-degree burns :v