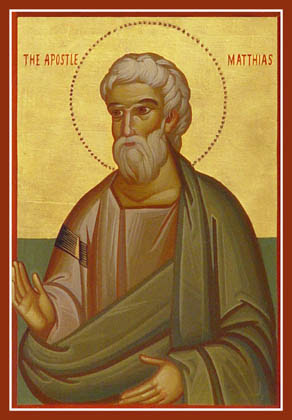 First there were 12, then there were 11, and the Church was faced with a problem. The perfect number 12 (the number of the tribes of Israel, for example) was lost by the son of perdition who refused to stand in the mercy of Christ. Was the Church to enter Pentecost and the great mission of proclaiming Jesus and His resurrection now one man short? Something must be done.

They come together and, as usual, for good or for ill, Peter is in charge. He stands up among the company of the 120 brothers and explains the problem (without sparing any of the gory details). Then he reaches back to the Psalms to justify forgetting Judas and leaving behind the memory of his unfaithfulness so that another might take his office.

Now comes the problem. Who wants to be the successor to Judas? No one would ever live down the memory of such a predecessor. It would be like following Bernie Madoff as president of the company that stole billions from trusting investors. I cannot imagine that they had many volunteers and those who would volunteer I would have thrown their resumes away. What about you.

Peter outlines the qualifications: a man who has been with us, from the beginning, through it all, from the baptism of John until the day of Jesus’ ascension and someone who saw the risen Jesus (that drops the number of candidates). It seems that from the short list, they came down to a shorter list. Two, to be exact. Neither of whom we know anything about except that we know three times as much about the one who was not chosen as the one who was.
He had three names and the one who was chosen had one.

And then they prayed. Joseph, called Barsabbas or Justus, and Matthias were praying that they would choose the other one... at least if they were smart.

Then comes the election. “You Lord know the hearts of all – you show us which one YOU have chosen to fill the open spot of minister and apostle from Judas who went his own way...”

So they cast lots – give God some raw material to work with, I guess. It is the only time a successor is chosen and the only time he is chosen with lots. Short straw wins, I guess. And Matthias won, well that is not exactly what Scripture says: the lot fell on Matthias. Call that winning or losing? I do not know which.

And that is the last thing we ever hear about Matthias. Period.

Now it might seem that the disciples made a mistake. God appointed another apostle and it was not Matthias but Saul become Paul. The early church did not number Matthias among the list of apostles until much, much later. He was simply called a witness. But eventually the Church accepted both the man the apostles chose and the one God chose and left the odd number of 13 for someone else to decipher.

All we have is a name-Matthias how do we remember him?
The unremarkable Matthias is remarkable only to God... In history a footnote... in the memory of the Church a mystery ... in the mission of the kingdom anonymous... in the list of the saints, a name... only to God remarkable at all.

I dare say I am the same. Sure there are people who know my name while I am alive... and someday my kids will remember me... and maybe a grandchild or two... but then I will be done... the unremarkable Larry is remarkable only to God...

And you are the same. We are all these names with stories largely anonymous, known well to the Lord and known hardly at all in history or the martyrology of the saints... we are the ordinary who are extraordinary only because of the riches of God’s grace in Christ, the mercy of His love to forgive us, the desire of His heart to redeem us, the wisdom of His Spirit to call us, the miracle of His work to teach us faith, and the mission that is ours for one brief shining moment while we live and then it passes to others... as it did to Matthias...

Is it enough for you? It appears it was enough for Matthias. I am learning to appreciate that it is enough for me, but I am not there yet... each day I struggle to come to terms with my anonymity... and whether being known to God is enough... in my youth it was not... as I age and mature a bit in the faith, I am coming closer and closer to saying that it is enough... I need to be remembered only by the Lord to be a success... And by the grace of God that is what He has made me... with Matthias... and with you. Amen
Posted by Pastor Peters at 8:34 AM

I am sure that Matthias was a much better person than I will ever be. So, this is not intended in any way to belittle him. But there is a slight problem with 13 as the number of Apostles. St. Paul claims to be an Apostle in his writings at least 16 times, and Rev. 21:14 clearly states: “And the wall of the city had twelve foundations, and on them were the twelve names of the twelve apostles of the Lamb.” So whose name is not on it, Matthias’ or Paul’s? Luke speaks of Peter standing “with the Eleven” during Pentecost, right after the election of Matthias.

If you look at the first part of Acts 1, just before the election, the Disciples still do not understand that the Kingdom of God is not the same as the Israel they expected to judge, in spite of the fact that they had received the Holy Spirit directly from our Lord earlier (John 20:23). But they were to “receive power” later; that is, the Lord, the Holy Spirit would decide when He would act, and that was obviously at the Feast of the Giving of the Law. None of the Apostles could have imagined what this “receiving of power” would be like, before it finally happened on Pentecost. But Peter, ever the enthusiast, just could not wait. God did not make the decision, because Peter never gave Him a chance to decide whether or not a replacement for Judas should be elected by the remaining Apostles. He only let God decide between the two people who were nominated.

What one believes about this story is not salvific. But it has a great deal to say about what the Apostle Paul calls “spiritual discernment”, about the meaning of the Kingdom, and the working of the Lord, the Holy Spirit.

Rev. Peters, I really appreciate the tone of your sermon, because it shows that it is possible to proclaim the Gospel purely, without insisting on the correctness of either side in this argument.
Peace and Joy,
George A. Marquart

What a great sermon. Reminds me of St. Ignatius of Loyola's Suscipe: Give me only your love and your grace; that is enough for me. Thanks!