A Bit About Ash Wednesday 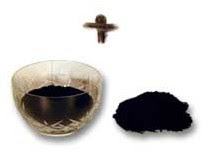 The Eastern Orthodox Church does not in general observe Ash Wednesday; instead, Orthodox Great Lent begins on Clean Monday. The first clearly datable liturgy for Ash Wednesday that provides for sprinkling ashes is in the Romano-Germanic pontifical of 960. Before that time, ashes had been used as a sign of admission to the Order of Penitents. As early as the sixth century, the Spanish Mozarabic rite calls for signing the forehead with ashes when admitting a gravely ill person to the Order of Penitents. At the beginning of the 11th century, Abbot Aelfric notes that it was customary for all the faithful to take part in a ceremony on the Wednesday before Lent that included the imposition of ashes. Near the end of that century, Pope Urban II called for the general use of ashes on that day. Only later did this day come to be called Ash Wednesday.

At first, clerics and men had ashes sprinkled on their heads, while women had the sign of the cross made with ashes on their foreheads. Eventually, of course, the ritual used with women came to be used for men as well. In the 12th century the rule developed that the ashes were to be created by burning palm branches from the previous Palm Sunday.

Our use of ashes at the beginning of Lent is an extension of the use of ashes with those entering the Order of Penitents. This discipline was the way the Sacrament of Penance was celebrated through most of the first millennium of Church history. Those who had committed serious sins confessed their sins to the bishop or his representative and were assigned a penance that was to be carried out over a period of time. After completing their penance, they were reconciled by the bishop with a prayer of absolution offered in the midst of the community.

With the gradual disappearance of the Order of Penitents, the use of ashes became detached from its original context. The focus on personal penance and the Sacrament of Penance continued in Lent, but the connection to Baptism was no longer obvious to most people. This is reflected in the formula that came to be associated with the distribution of ashes: "Remember that you are dust and to dust you will return." This text focuses on our mortality, a mortality which was answered by the baptismal bestowal of the life which death cannot overcome. Part of the work of the Church over the past 30-40 years has been to re-establish the link between ashes and baptism and the Lenten time of baptismal renewal as well as formation.

Fellow Blogger Norman Teigen over at Lutheran Colportage has this wonderful post about ashes...
Apparently the ashes on the forehead custom was in use by the 10th century. The custom is a token of mourning and repentance. Memento homo quia pulvis es, et in pulverem revertis ('Remember man, for dust thou art, and to dust shalt thou return'. Gen.3:19).

A letter in 1654 describes how strange Christians looked when they walked around with smudged faces. "The Christian Church hath a longer and more solemn Way of fasting than any other Religion, take Lent and Ember-weeks together. In some Church the Christian useth the old Way of Mortification, by Sackcloth and Ashes, to this Day; which makes me think of a facetious tale of a Turkish ambassador in Venice, who being returned to Constantinople, and asked what he had observed most remarkable in that so rare a City? He answered, that among other Things, the Christian hat a Kind of Ashes, which thrown upon the Head doth presently cure Madness; for in Venice I saw the People go up and down the Streets (said he) in ugly antic strange Disguises, as being in the Eye of human Reason stark mad; but the next Day (meaning Ash-Wednesday) they are suddenly cured of that Madness by a Sort of Ashes which they cast upon their Heads." [sources: The Oxford Companion to the Year; The Oxford Dictionary of the Christian Church]

I love the image above... It has sparked so many thoughts.. and since that is what Pastoral Meanderings is about... here are some of them...

Truly sin is our madness. In comparison to the noble place and purpose we occupied in creation, we have indeed gone mad -- both the madness of sin and what it has done and the madness of our inability to fix what sin has done. It is for this reason we are those miserable sinners of our confession (not because we do so poorly at sinning but because we cannot stop ourselves nor can repair the damage that sin has done to us and through us).

If sin is our madness, it is cured only by the Spirit who brings forth in our hearts the genuine repentance that only God can accomplish, the genuine faith that clings not to works or piety or self but to Christ alone, and the genuine redemption which is born not of our sacrifice but only to the blood that has the power to atone for the sins of the whole world.

This morning we had some who came early for their cure. Later we will have many more (Lutherans are still a bit uncomfortable about wearing this outward sign where just anyone might see and for a whole day, at that). The ashes are not the madness, they are the cure (here seeing the ashes are outward sign of inward contrition and repentance).

I went to the noon-time service, and wore my ashes the rest of the day. A coworker was not sure she wanted to go for a walk with me on afternoon break! Someone else told me I had dirt on my face. Yet another person (Roman Catholic) said, oh, I'll be going after work! She got it. It felt special to be marked for the rest of the day. Last year our church had scented ashes! Wrong in so many ways. One of which was it was rose, VERY strong, and it lit up my allergies. I complained (nicely) to the pastor (whose idea it was not) and he made sure no scent this year. Why would we want to "pretty" it up anyway?