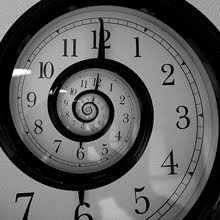 I know many folks who carry two cell phones (one for work and one for personal use).  Often they are the very same model and I have watched with some giddy satisfaction as one or two have tried to figure out which was ringing and which was not.  It is not that I am unsympathetic about trying to keep home and work separate -- I try to do the very same thing!  But it often ends up in a confusing tangle of competing loyalties that is appropriately symbolized with both phones ring at the same time -- which gets answered and which does not?

I believe that Christians often find themselves in much the same circumstance with the competition not between work and home calendars or cell phones but between the church's calendar and the world's calendar.  It seems that this competition is generally a win for the world and a loss for the Church.  What we are speaking about here is not simply a calendar duel but the distinction between God's time and our own time, between the kairos of His full or ripe moment and the chronos of the clicking clock.  This is one area where too many Christians have given up and Sunday is almost unintelligible to them in comparison to the rest of their lives.

It is not surprising that folks do not know the liturgical calendar (why, there are an abundance of Lutheran congregations in which this calendar is hardly followed).  It is somewhat surprising that so many Lutheran Pastors do not know the calendar.  They have no clue to the progression of the lectionary and its themes through Pentecost and the close of the Church Year and they do not know how or why we have seasons like Advent or Epiphany.  It seems Christmas and Easter (and Lent as prelude) are obvious enough but is Advent more than delayed gratification and is Epiphany more than biding your time until Ash Wednesday?  Too many cannot say for sure about either.

The point of my words is not to be angry or jump on these poor souls but to point out why it is that Lutherans are so tempted to millenialism and to the preoccupation with the present that you find in either spectrum of Protestantism.  It is left mostly to the Roman Catholic, Orthodox, and a smattering of Lutherans and Episcopalians to see how God's time is so at odds with our own pressing schedules and to view what happens on Sunday morning as the move of God's people out of one sphere of time where work and self dominate and into the sphere where God's Word and works dominate.

The point of the liturgical year is not simply education, which it is, but the introduction to an understanding of time which is not shaped by earthly concerns but the God's plan of salvation that was laid down before the foundation of the world and unfolded step by step in Christ.  And it is still unfolding toward the consummation of all things in Christ's return in glory.  This is a fluid time and a moving calendar in which we do not merely repeat the same calendar over again year after year with different lessons to fill in the blanks (three year series) or exactly the same lessons (one year series).  We are moving toward God's fullness and if we are in Christ we not only are prepared for it but to participate in that unfolding time.  Outside of Christ there is only now and this is the what pulls at us Christians who are in but not of the world.


What does the hymn say?  Time like an ever rolling stream... flows not toward fate or destiny but that which Christ has prepared according to the Father's plan of salvation laid down before time itself began...  This is what the Church Year works to instill within us -- an appreciation of this time running not by minutes or seconds or even months and years but step by step as God unfolds it.  To live within the Church's calendar is to be ever confronted with this time and its unfolding toward fullness and consummation.  This is why we need to be conscious of this calendar and of this sense of time... or we will be left only with the present, with the memory of the past and with fear of the future...
Posted by Pastor Peters at 12:22 PM

Quote from Pharisee Peters:
"So many Lutheran Pastors do not
know the church calendar" This is
not backed up by any factual data,
but it merely a strawman and off the
cuff hybris. I believe our Sems at
Fort Wayne and St. Louis are able
to teach the church year in their
worship courses and newly ordained
pastors are able to preach the
assigned lectionary for the church
year.

Anonymous uncharitably calls Pr. Peters a Pharisee for his observation that "So many Lutheran Pastors do not know the church calendar." And to make it even more grievous did not have statistics to prove it. As a layman, and speaking anecdotally, I would agree unreservedly with Pr. Peters. In fact, I have had a pastor confess to me while we were discussing liturgy and the church year, that he really didn't know much about either. So much for what was learned in the seminary in that regard! And beyond that confession, most of the pastors I have known have amply demonstrated either their lack of knowledge or their indifference to liturgy and the church year. Could it be, to use an earlier observation from Pr. Peters, that they were uncomfortable in their Lutheran skins?
--Bill H.

To not "know" the Church Year is not to say they could not give a basic explanation of what follows what in that calendar... rather it is to say that they do not know what it is unfolding or how it moves in this process or follow this calendar in their thinking and piety... Does that help?

Not to throw CPH or the comission on worship under the bus, but the three year ILCW series didn't help with the understanding of the church year, and now having an adaptation of that can make the flow of the readings through the year (particularly through the sundays of pentecost) seem a arbitrary in the best of times and downright inscruitable at the worst.