Who Moved My Cheese??? 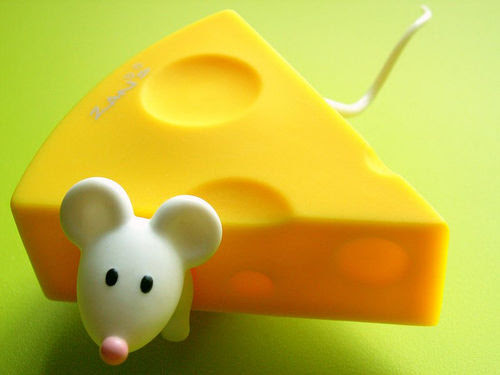 With over 5 million copies cold, this little book seems to have just the answer to what ails the Church.  We have been creatures of routine, doing the same things over and over again and then we wonder why we do not get different results.  This little story of Hem and Haw (little people) and the mice (Sniff and Scurry) is amusing and not without its moments but as a device to repair what is wrong with the Church, it is sorely lacking.

The moral of the story is this:

In the name of moving the cheese, Lutherans have been urged to ditch the liturgy, skip the hymns of old, ignore their Confessions, dump vestments, rearrange the furniture in the sanctuary, and, in short, give up on those things that make them Lutheran.  The goal is, of course, to win converts for Jesus and the enemy of that goal is everything that stands in the way of making those converts (like doctrine and practice).  But then again, you know where I stand.

Let me put it another way. . . The Roman Catholic Church announced that five bishops are leaving the Church of England (Anglican) and becoming Roman Catholic.  As one wag put it, Anglicanism and Rome were once fairly close together.  Who moved?  (Who moved the cheese?)  Rome has stayed fairly consistent although Sunday morning looks different in Rome than it did in 1530.  Anglicans don't look much at all like the people they used to be.  Again, who moved?

The ELCA and Missouri are often framed as Lutherans on a different path (rightfully so) but the truth is that once the paths were very close together (Common Service, Galesburg rule, moral stance, etc.).  Missouri is sometimes accused by the ELCA to having changed (and there is a bit of truth to it) but who really changed?  (Who moved the cheese?)

Presbyterians were once thoroughgoing Calvinists and now it is hard to find a real Calvinist anywhere.  Arminians have taken over the Church of Calvin and Knox.  There are still the Heidelberg Catechism and the Confessions of Westminster and Dordt among others, but who pays all that much attention to them today.  Who moved?  (Who moved the cheese?)

I could continue but my point is this.  What is the cheese in all of this?  It appears as if the "cheese" is the doctrine and practice of these churches and that it is a movable object subject to shifts of interpretation and meaning which the theological heirs of these faiths are free to move or change as they feel necessary.  I fear that the problem is not that somebody moved the cheese but we have been moving it around so much, we don't even know what the cheese is or why it is still important.  Change has become the new fashionable god of politics, culture, and religion.  The cheese is not important but the moving is -- change is object of our infatuation.  We change doctrine, practice, morality, and truth because we like to change them and we want to change them.  It has less to do with the desire to be effective or efficient as much as it has to do wanting to reinvent ourselves on a regular basis.

Who moved the cheese?  It seems to me that the cheese does not move and the whole goal of Christianity is to stay close to the cheese.  It seems to me that those churches who have moved the cheese are the very ones who have lost their Christian identity.  Does a Joel Osteen bear much more resemblance to creedal orthodoxy than the Mormons?  I don't know anymore.  Does a church so enamored with the cusp of moral change bear much more resemblance to the classic Christian identity than Islam confesses Christ?  I don't know anymore.  Does a church which delights in breaking all the rules and tearing down the bridges that connect us to our Christian heritage (Tradition) bear any resemblance to the Church Jesus Christ said hell could not overcome?  I don't know anymore.  It seems to me that the rule we have forgotten is that the cheese never moves.  We change and stay the same.  The world changes and remains the same.  The needs of people change and yet are consistent from age to age.  The Church does not need to jump on the bandwagon of change but to offer the world a, well, to quote an old phrase from LCMS history, changeless Christ for a changing world.
Posted by Pastor Peters at 8:07 AM

Something No One Else Did - Early Christians Ate The Cheese

The public station was replaying an interview with historian/sociologist Rodney Stark...he is an American sociologist of religion. He grew up in Jamestown, North Dakota in a Lutheran family.

Reporter: Why did the Christian movement grow so rapidly in the first few centuries after Jesus' crucifixion? ...

Stark: The growth surge of Christianity was rooted in the response of early Christians to a wave of great pandemics ... During that time, Christians did something no one else did.

Reporter: And what was that?

Stark: It sounds simple, but they stayed. They helped. And many gave their lives in doing so.

I refer to a letter written by Dionysius, the bishop of Alexandria. He describes how early Christians responded to a deadly plague that killed an estimated five thousand people a day in the Roman Empire sometime around AD 260:

"Most of our brother Christians showed unbounded love and loyalty, never sparing themselves and thinking only of one another. Heedless of danger, they took charge of the sick, attending to their every need and ministering to them in Christ ... they were infected by others with the disease, drawing on themselves the sickness of the neighbors and cheerfully accepting their pains. Many, in nursing and curing others, transferred their death to themselves and died in their stead..."

Joel Osteen reflects the shallowness
of cultural Christianity. He has no
educational background. He attended
one year of college and dropped out.
Joel never attended a theological
seminary. His father "ordained" him
in 1983. After 17 years of behind
the scenes TV production Joel took
over Lakewood Church in 1999 when his
father died. Osteen preaches "the
health and wealth" gospel and does
not conduct weddings or funerals or
make hospital calls. Joel Osteen
is simply a "positive thinker" who
masquerades as a pastor.

I'm an amateur proofreader and editor, and typos leap out at me. So. . .the culprits in the Presbyterian Church are the Arminians, not Armenians ;)

What a cheesy discussion!

Is it necessary to dumb down the discussion terminology in order for people to read and understand it? Are the people that shallow today? How very sad! This seems to say that it must not be a matter of much importance to them if they cannot think about it in adult language, if that requires too much mental effort.

Perhaps that is a part of the problem. The Church is not asking people to think hard enough. It is treating matters of faith and religion as things that only need second grade level thought. Doesn't that send the message that this is not really a serious, adult concern?

As Rod Rosenbladt says, "When Jesus Christ returns, will He find a thought on earth?"

Fr. Bill Cwirla says cheese is the perfect food (next to bacon).

We all should remember that well aged cheese is the best... and I think we can all claim some intelligence though we use metaphorical language.